How the Microbiome Could Transform Your Skin in Surprising Ways

Share
Hint: It has the potential to combat acne, eczema and more. Learn how Johnson & Johnson is harnessing the power of bacteria in innovative ways to help keep skin healthy—starting in infancy.
By Magdalena PuniewskaJuly 09, 2017
Today's Top Reads Close
T

here’s been a lot of buzz in the news lately about the microbiome—the ecosystem of trillions of microorganisms that co-exist in and on us and that may be responsible for keeping us healthy.

Johnson & Johnson’s interest in the microbiome can actually be traced to the turn of the century. In 1887, it was the first company to mass-produce sterile gauze, cotton and surgical dressings—all of which helped shield patients from harmful bacteria. As a direct result, survival rates in American hospitals started to climb.

Over the years, company scientists began to find that many germs could be good for the body, too.

As it turns out, having a diversity of these beneficial organisms can help maintain the skin's defense barrier, which is tasked with protecting us from infections. This is why it's essential for Johnson & Johnson Consumer's products to not only be effective, but also gentle, so they can encourage these helpful microorganisms to stay and continue reproducing to help keep skin healthy.

Meanwhile, Phagelux, Inc.—a biotechnology company focused on the development and commercialization of so-called bacteriophage-derived technologies that selectively eliminate “bad" bugs while leaving the healthy microbiome intact—recently announced that it has reached an agreement with Johnson & Johnson Consumer Inc. to collaborate on the development of one or more products to improve skin health via the microbiome.

And that’s just scratching the surface of what the company has been up to recently when it comes to studying the potential health and beauty benefits of good bacteria. We look at the many ways Johnson & Johnson is at the forefront of improving skincare—courtesy of the microbiome.

Since then, they have been studying the evolution of the skin microbiome through the different stages of life, as well as the role products, routines and rituals may play in its development, starting in infancy.

In March, Johnson & Johnson Consumer presented a study at the annual meeting of the American Academy of Dermatology showing that, over the course of the first month of life, the microbial diversity of infant skin is significantly increasing. The use of a Johnson's regimen of baby wash, baby shampoo and baby lotion did not negatively affect that healthy evolution.

Translation: The company's products are not affecting the natural development of the skin microbiome in infancy.

In a recent trial of Aveeno® Eczema Therapy Moisturizing Cream, patients with eczema saw a 50% improvement in their condition after two weeks of use. Researchers also noted a jump in microbial diversity on their skin.

And that healthy growth could be important down the road, since studies have shown that the adult microbiome doesn't change much over time—so it's important for it to start off healthy early in life.

Some of the company's skin products can also help support adult microbiomes.

In a recent trial of Aveeno® Eczema Therapy Moisturizing Cream—findings from the study were presented at the Society for Investigative Dermatology meeting in April—patients with eczema saw a 50% improvement in their condition after two weeks of use. Researchers also noted a jump in microbial diversity on the patients' skin, which the scientists think could have played a role in improving the skin’s balance.

That's because when eczema lesions start to diversify, they heal. In the study, researchers found that the company's product helps balance the microbiome and improves itchy, dry skin.

As the Consumer division works to explore the microbiome further, they hope to continue to find ways to enhance its natural health effects to be able to further deliver innovative therapies to consumers.

It took a near-death experience for Thomas Hitchcock to really appreciate bacteria. 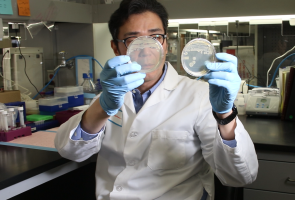 “While I was doing my postdoc in tissue engineering and gene therapy, I was hospitalized with a small infection that escalated into MRSA, C. diff and pneumonia all at once—just because I was misdiagnosed and received the wrong antibiotics,” Hitchcock recalls. “It taught me to respect the microbiome and realize that many infections should be treated in a targeted way, instead of just throwing antibiotics at everything.”

As the CEO of Xycrobe, a start-up based at the San Diego location of Johnson & Johnson Innovation, JLABS—an incubator arm of the company focused on helping budding healthcare start-ups—he’s taking a similar approach with acne.

For many years, it was thought that “dirty” skin loaded with P. acnes bacteria caused acne breakouts. Patients were taught to cleanse, scrub and slather on a topical antibiotic that would kill off this offending bug.

But not all of this bacteria is bad, Hitchcock says. “People were going overboard and actually killing off whole populations of bacteria, including the good kind, ending up with more organisms that were resistant to treatment or that had built up a tolerance.”

This meant that the acne became harder to treat and often led patients to more aggressive, drying therapies that only caused more breakouts.

Some people with acne have genetic predispositions that make it harder for their skin to produce enough anti-inflammatory compounds, and they often have different bacteria within their microbiome that contributes to acne.

So Hitchcock decided to dig deeper into the problem. “I came across research that found some people with acne have genetic predispositions that make it harder for their skin to produce enough anti-inflammatory compounds, and they often have different bacteria within their microbiome that contributes to acne.”

Furthermore, the Xycrobe team found that to really banish acne, medicine needs to penetrate deeper into the skin than most current treatments, which tend to focus on the outermost layer of the dermis.

So Xycrobe engineered skin-friendly bacteria, taken from individuals with healthy skin, and named them (of course) Xycrobes. These organisms are designed to speed past the top layer of dead skin cells into the next, deeper layer. Once there, they eat up extra oil produced from the sebaceous glands, while also releasing antioxidants and anti-inflammatory mediators to prevent the growth and reduce the harmful effects of pathogenic bacteria.

This potent process ultimately allows good bacteria to flourish, helping the skin heal. The end result: a solution that combats acne by working symbiotically with the skin's organisms and environment, instead of against it.

The start-up recently signed a research collaboration with Johnson & Johnson Consumer Inc. and is currently testing their acne product with the hope of launching it in 2018.

“We want to change the way we design acne treatments," Hitchcock says, "and understand how the body interacts with the skin microbiome to come up with more effective solutions.” 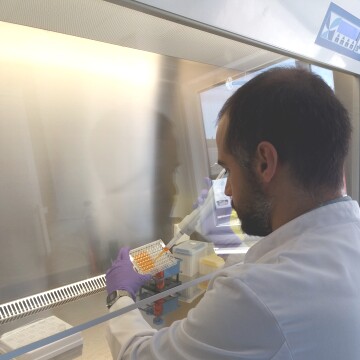 Yet another company, S-Biomedic, is aiming to fight acne with a different, but equally exciting, approach. Get rid of the bugs that can cause pimples, its thinking goes, so you can replace them with alternative strains that could help prevent them.

Got Acne? The Neutrogena Light Therapy Acne Mask Could Be Your New Go-to Zit-Zapper

Since joining JLINX this year, the team at S-Biomedic has been developing a skincare product based on exactly these principles: an acne-zapping gel that boosts healthy bacteria levels.

“First, we remove harmful bacteria," explains Veronika Oudova, S-Biomedic's CEO. "Then, when the patient has more of a ‘clean slate,’ we introduce a variety of good bacteria, giving them an advantage to colonize and grow. Having diversity is key—the more beneficial strains that you have on your skin, the more stable the environment is.”

While the thought of applying bacteria on the skin may be daunting for many people, Oudova thinks it’s the future of the beauty industry.

What makes S-Biomedic’s technology truly unique is that the bacteria found in their product is sourced directly from healthy human skin, leveraging a natural smorgasbord of different strains already well-adapted to the environment where acne products are used—namely, the face. This, the team hypothesizes, will ensure that good-for-you microbes colonize the skin in the most efficient and effective way possible.

While the thought of applying bacteria on the skin may be daunting for many people, Oudova thinks this novel strategy is the future of the beauty industry.

“One of the biggest advantages is that bacteria are already living on our skin, and they constantly produce and interact with molecules and other bacteria to essentially make up our skin profile, whether it’s acne-prone, healthy or sensitive,” she says. “By learning about which strains are beneficial, and then repopulating the ones that people need, we are optimizing their treatment.” 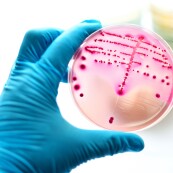