Share
Learn about the revolutionary work they're both doing in the field of neurodegenerative disease that could prove important in fighting often-fatal conditions.
By Johnson & JohnsonJune 03, 2019
Today's Top Reads Close

It's neurodegenerative illnesses like these that this year's winners of the Dr. Paul Janssen Award for Biomedical Research are focusing their extraordinary talents on decoding.

Franz-Ulrich Hartl, M.D., of the Max Planck Institute of Biochemistry in Germany, and Arthur Horwich, M.D., of the Yale School of Medicine and Howard Hughes Medical Institute in the U.S., were chosen for the award based on their groundbreaking insights into a process called chaperone-mediated protein folding and its importance in cellular health—particularly in preventing proteins from aggregating in a way that could potentially lead to the fatal symptoms neurodegenerative diseases can cause.

Dr. Hartl and Dr. Horwich join 16 scientists who've received the award to date, including three who ultimately went on to win the Nobel Prize.

Johnson & Johnson created the award in 2004 to honor Paul Janssen, Ph.D., the innovative founder of what is now called the Janssen Pharmaceutical Companies of Johnson & Johnson.

Each year, the award is given to the most passionate and creative scientist or scientists in basic or clinical research whose achievements have made, or have strong potential to make, a measurable impact on human health through the diagnosis, treatment or prevention of disease.

Dr. Hartl and Dr. Horwich, who were selected by an independent committee of world-renowned researchers, join 16 scientists who've received the award to date, including three who ultimately went on to win the Nobel Prize.

They'll share a $200,000 cash prize to further their work and each receive a sculpture with an inspirational inscription of "What's New?" It's a nod to the question Dr. Paul, as he was affectionately known, asked daily in his lab to encourage his colleagues to seek new ways to help patients—and inspire the next big health breakthroughs.

Along with David Julius, Ph.D., who won the Dr. Paul Janssen Award in 2013, Drs. Hartl and Horwich were also just honored with the 2020 Breakthrough Prize in Life Science for the transformative advances they've made toward understanding living systems and extending human life. 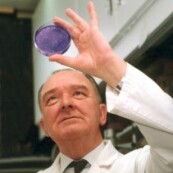