Share
A commitment to health, caring and employee growth helps make the company so great—and so great to work for.
By Johnson & JohnsonFebruary 16, 2017
Today's Top Reads Close

The results are in: Johnson & Johnson has made Fortune’s Most Admired Companies list for 2017, based on nine criteria, including investment value and social responsibility.

This year, Johnson & Johnson ranked #13 on the list overall—up two spots from last year—and took first place in the Pharmaceutical category worldwide. The company also ranked first in all nine key attributes of reputation, which influence rankings on the list—helping to make it one of the best companies to work for.

All of this should come as no surprise to its 127,000 employees.

At the company's heart is its Credo, which outlines Johnson & Johnson's mission to put people's needs front and center. And that includes not only the people who the company helps serve, but also those who make up its workforce.

Employees at Johnson & Johnson can take advantage of a wide range of benefits that speak to the company’s commitment to caring and inclusivity.

In 2016, insurance coverage for fertility in the U.S. was extended to same-sex couples, and adoption reimbursement benefits were increased to up to $20,000 per child. And moms worldwide who travel for work can also take advantage of a new program that ships breast milk safely home.

On a broader scale, Johnson & Johnson remains dedicated to improving the well-being of people around the world through its work with newborn and child health, HIV/AIDS, tuberculosis and more—all with the aim of giving the most vulnerable populations access to the care and treatment they need.

Paramount to that effort is a healthy healthcare workforce, which Johnson & Johnson is helping to strengthen in a number of ways, from supporting nurses and nursing students through scholarships and continuing education to training midwives.

Johnson & Johnson is thrilled that Fortune has recognized once more how it is helping to change the world—by putting people, and their good health, first. 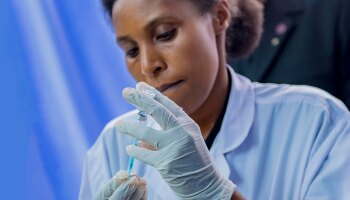