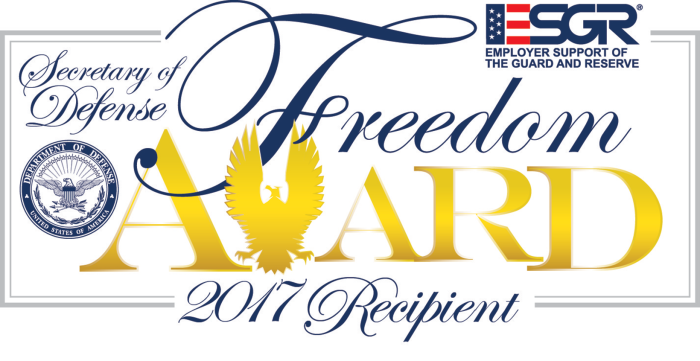 On June 1, 2017, Secretary of Defense James Mattis announced that Johnson & Johnson was awarded the 2017 Secretary of Defense Employer Support Freedom Award for our exemplary support of National Guard and Reserve employees. This award comes on the heels of Johnson & Johnson being recognized as the awardee of the 2017 New Jersey ESGR Pro Patria Award.

Nominations for the Freedom Award come from Guard or Reserve members who are employed by the organization they are nominating, or from one of their family members. A selection board composed of senior Defense officials and business leaders selected the national award recipients.

Created in 1996, the Freedom Award is the highest recognition given by the U.S. government to employers for their support of their employees who serve in the Guard and Reserve. More than 3,000 nominations were made this year, and Johnson & Johnson is proud to be one of the 15 companies awarded.