Share
Every day is Earth Day at a company that has made sustainable practices a priority for more than 130 years. Take a look at these highly creative recycling programs that have popped up through the decades.
By Jessica HendersonApril 17, 2018
Today's Top Reads Close

Dental floss, doll dresses and doggy training pads. What do these three things have in common? Believe it or not, they're all products Johnson & Johnson has made by upcycling materials that otherwise would have gone to waste.

Since its beginnings in 1886, the company has found innovative ways to repurpose surplus materials into new products. Practical, yes—but this practice also falls in line with Johnson & Johnson's long commitment to sustainability, which is spelled out today in its Health for Humanity 2020 Goals.

In honor of that heritage, and in tune with the tenets of Earth Day, we're taking a look at eight surprising ways the company has found creative new uses for everything from sutures to sanitary pads. 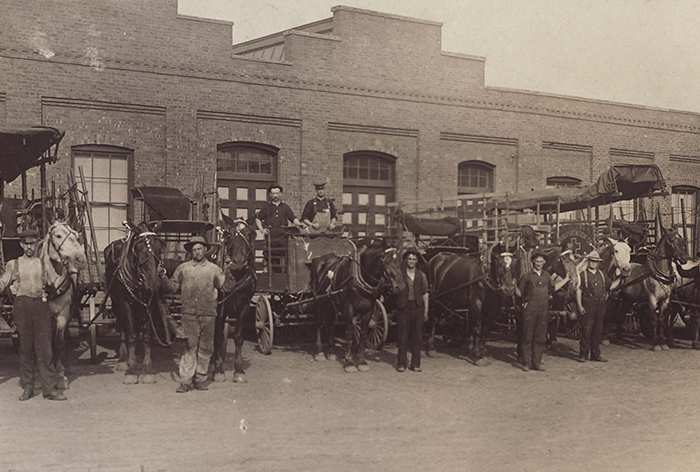 Today, online delivery service cardboard boxes may be a regular sight on your front stoop, but when Johnson & Johnson was starting out in the late 19th century, deliveries of raw materials—such as the glass and metal jars used to package products like gauze and sutures—arrived at company headquarters in New Brunswick, New Jersey, via wooden shipping crates.

When those crates cracked due to normal wear and tear, the company saw an opportunity to give back to its employees: It broke up the damaged crates and delivered that wood via horse and carriage (shown above) to workers who lived nearby to use as kindling in their home stoves—an early form of recycling, although the term itself wouldn’t be coined until the 1920s.

“Delivering that wood for use as fuel in their stoves, not only for cooking but also heating the house, is a great example of the kind of support and commitment the company has always shown for its employees,” says Margaret Gurowitz 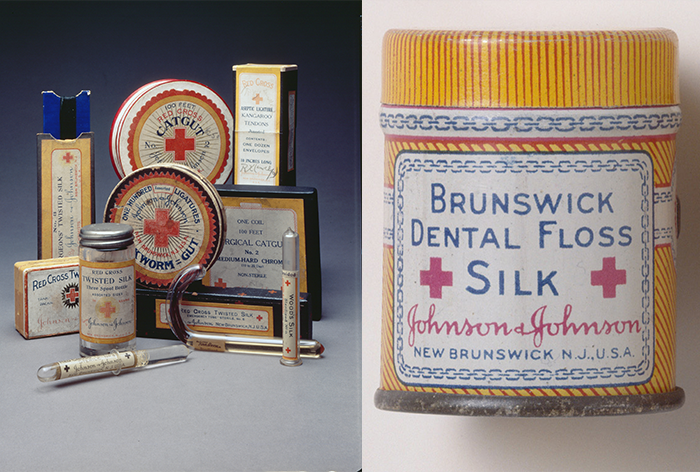 While dental floss was first invented in the early 1800s by a pioneering American dentist named Levi Spear Parmly, early floss was made of strong—but costly—silk threads that made it prohibitively expensive for the average consumer.

Enter the clever Johnson brothers who, in 1898, realized that the surplus silk the company had from making its sterile sutures (some of those products are shown above) could be repurposed into floss, and packaged around small spools to create a much-needed dental hygiene product for the mass market. Translation: The public could stop picking at their pearly whites with sharp pieces of wood.

In effect, Johnson & Johnson simultaneously helped to usher in the era of modern antiseptic surgery and modern oral hygiene.

“Johnson & Johnson made floss much more widely used and affordable,” Gurowitz says. “And the cutting mechanism on our modern floss containers is the same as it was when it was introduced over 100 years ago.” 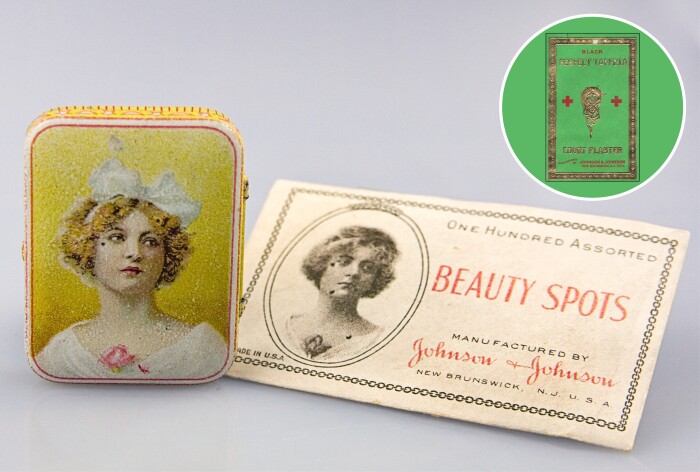 Long before specialty serums and shimmery highlighters became must-haves for the beauty-obsessed, Johnson & Johnson introduced a fashion-forward product: Beauty Spots—which were sold in the 1910s and '20s—were small, self-adhesive stickers used to draw attention to becoming facial features, like the apple of the cheek.

Got Acne? The Neutrogena Light Therapy Acne Mask Could Be Your New Go-to Zit-Zapper

Beauty products were new territory for Johnson & Johnson in the early 20th century, “but these spots were a huge fashion fad, and the company saw a savvy business opportunity,” Gurowitz says.

Beauty Spots were made from pieces of dark silk and taffeta fabric left over from the manufacture of court plasters (shown in the inset above), which were self-adhesive patches used to cover small abrasions or cuts—much like the company's more modern BAND-AID® Brand adhesive bandages. The material was then cut into small, whimsical shapes, such as hearts and crescent moons.

Beauty Spots were sold in sheets of 100 and came with decorative tins, like the one pictured, so women could carry extras in their purses. 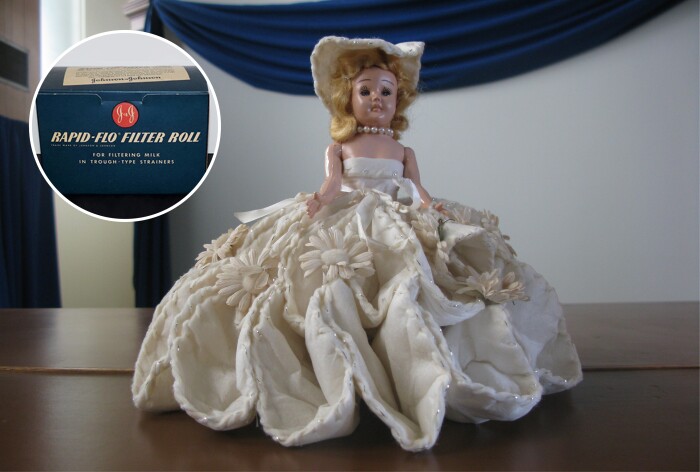 During the 1950s and '60s, the company came up with a clever way to tap into the budding DIY movement with, wait for it … dairy filters.

From the 1930s through the '60s, Johnson & Johnson made Rapid-Flo filters (shown above, inset) for the dairy industry, which were large discs of nonwoven fabric used to remove sediment during the milking process.

Filters left over during the manufacturing process were repurposed—and dyed in pastel yellows, blues and pinks—to be packaged in Dress-a-Doll sewing kits for making elaborate, doll-sized ball gowns, like the one shown.

Going to the Dogs 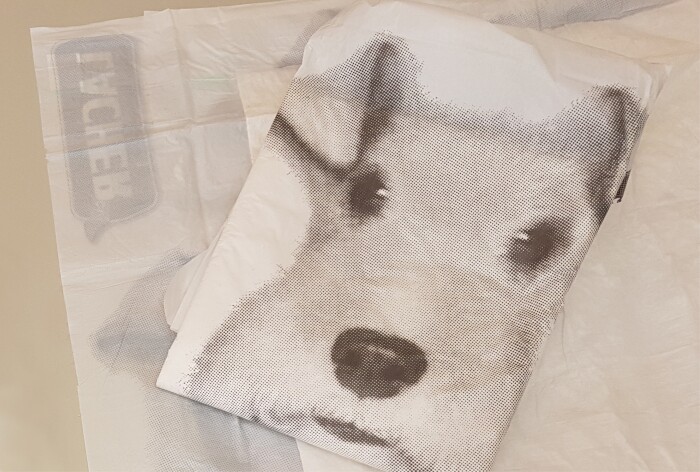 At a Johnson & Johnson manufacturing site in Brazil, sanitary pads rejected during the quality control process go to the dogs—literally. Each year since 2011, the company collects about 50 tons of its Sempre Livre® sanitary napkins that are otherwise unusable, shreds them and ships them to partner companies that upcycle the material into puppy training pads.

Lister's Dog Soap: Why Johnson & Johnson Once Sold a Product Made for Pups

"It makes me proud to see waste turn into a quality product," says Fabio Mendes Machado

The same site in Brazil also has a program to upcycle the plastic waste from its sanitary products production into toothbrushes. The plastic scraps are processed into pellets at an on-site waste center—about 10 tons of those pellets become toothbrush handles each year. 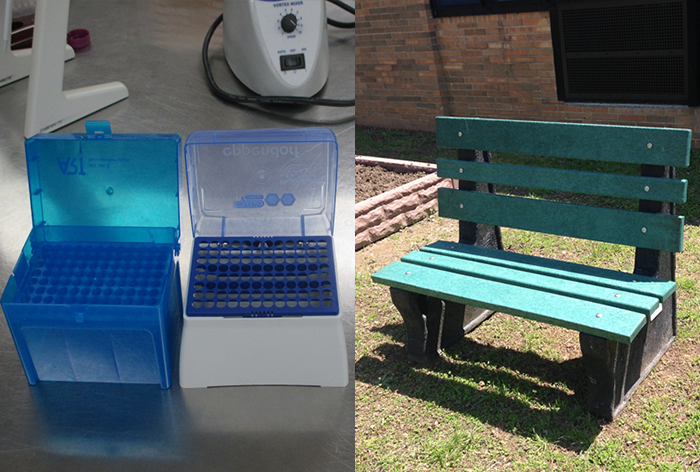 How much can we bench press? About 850+ if we’re talking about how many upcycled park benches Johnson & Johnson has helped to create since 2012.

This Johnson & Johnson Patent Holder Is Helping to Save the Planet

The benches are made from plastic boxes that house pipette tips, which are syringe-like tools used to draw and dispense fluids in laboratory testing. These boxes (shown above) are usually considered biopharma waste because they’re constructed from tough number 5 plastic, which isn’t accepted at most recycling facilities.

But through its partnership with lab material supplier VWR and TerraCycle, which upcycles the used containers, over 164,000 boxes from participating Johnson & Johnson labs across the U.S. were recycled into more than 200 park benches in 2017 alone that were then distributed to underserved communities and schools. 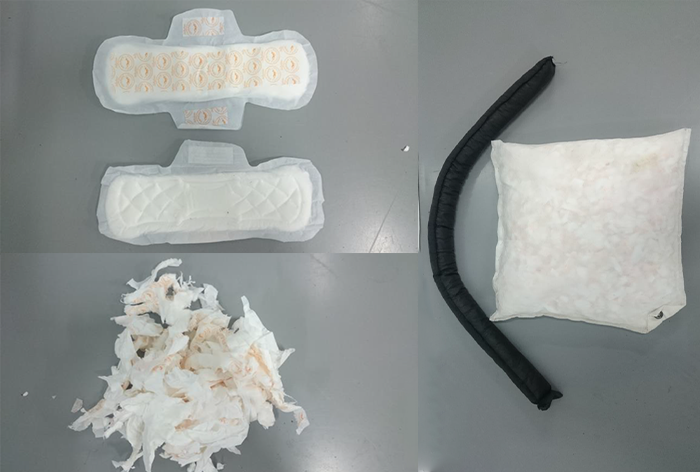 One of Johnson & Johnson’s newest recycling programs kicked off in 2017 and is designed specifically with waste diversion in mind.

Its East London, South Africa, site repurposes Stayfree® sanitary pads that are rejected during the quality control process by shredding and then stuffing them into spill-control "pillows" (shown above, on the right) and wraparound casings (the black tube, shown above) that can both quickly absorb nonhazardous liquids, such as wastewater and oil, to help clean up on-site accidents. Each pillow and casing created through this waste-to-value initiative utilizes about 500 defective pads. 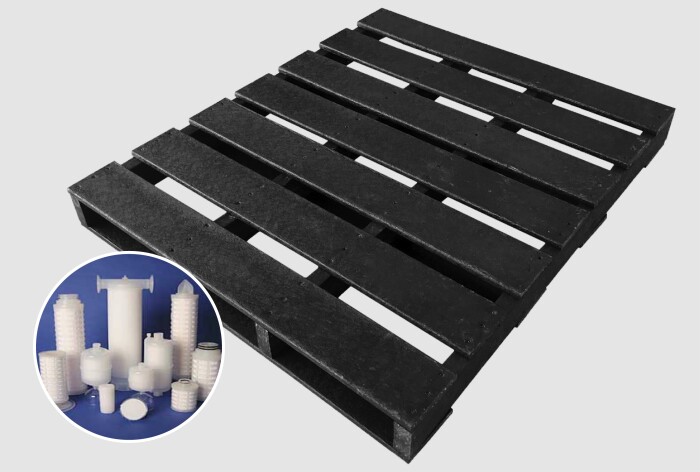 In 2017, the company introduced an innovative new program for recycling single-use technologies (SUTs)—biopharma items such as the chemical containers and sterilizing filters shown in the inset above.

Through a partnership with Triumvirate Environmental and MilliporeSigma, these manufacturing waste products can be recycled through a patented process that separates, sterilizes, grinds and blends the material to create industrial-grade plastic lumber that can be used to make everything from shipping pallets (shown above) to borders for flower beds.

The program is in place at Johnson & Johnson’s campus in Malvern, Pennsylvania, where about 50 tons of SUTs were recycled last year.