Johnson’s® Shaving Cream Soap: The Product That Revolutionized Grooming in the 1900s

In honor of Father’s Day and that classic gift of a shaving kit, our in-house historian shares the story behind Johnson & Johnson’s first personal care product made just for men.
By Iris GrossmanJune 14, 2017
Share
Share
Today's Top Reads Close

Why did Johnson & Johnson start making shaving cream in 1907?

Margaret GurowitzChief Historian, Johnson & Johnson, Chief Historian: In the early 20th century, most men used cake soap and a shaving brush to lather up their faces. This was a messy way to deal with a daily skincare chore, plus it was unhygienic because the damp cakes of soap harbored germs.

Since its founding, Johnson & Johnson has been dedicated to devising solutions for unmet healthcare needs, as well as creating products that can make people’s lives easier and safer. So Johnson’s® Shaving Cream Soap was a no-brainer for the company. 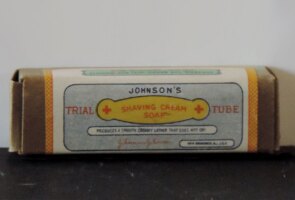 The new shaving cream was packaged in sealed, capped, collapsible tubes, so it was more sanitary than cake soap, and more portable. And it generated a nice, thick lather that made shaving more comfortable.

Despite the fact that the soap was introduced in the middle of an economic depression, known as the Panic of 1907, and consumers were keeping a close eye on their spending, the company successfully convinced men to purchase the product by giving out free samples at pharmacies and through ads billing it as a "shaving delight" from a "product of science."

One group that didn’t need convincing to try it: soldiers fighting in World War I.

Muddy trench warfare wasn’t conducive to the old way of shaving, especially with a lack of access to clean water. Johnson & Johnson employees serving overseas were enthusiastic ambassadors for the product and helped spread the word by asking stateside co-workers to send Johnson’s® Shaving Cream Soap in care packages.