Share
A century ago, keeping a tidy house meant more than just impressing the neighbors—it could also keep illnesses like polio and measles at bay. These vintage ads helped show magazine readers how.
By Liz KriegerMarch 29, 2017
Today's Top Reads Close

If you’re like many people, you probably don't get around to tackling your spring cleaning until the dust bunnies get to a critical mass. But if you were alive a century ago, you would have been urged to start scrubbing and freshening during "Clean Up Week" each March.

A 24-Hour Guide to Improving Your Allergy Symptoms
Share expand 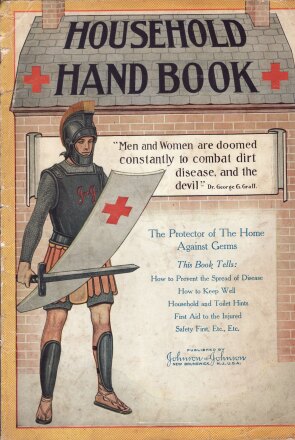 A Household Hand Book from 1916

Throughout the 1910s, Johnson & Johnson ran full-page color ads for Clean Up Week in major magazines, including Good Housekeeping and Cosmopolitan. The intent was to not only urge readers to consider the importance of a clean house for general tidiness, but to also help prevent such illnesses as polio, diphtheria and measles—some of which had a tendency to increase with the arrival of warmer weather.

“At that time, before vaccines and antibiotics came along, the main lines of defense against contagious diseases were disinfectants, antiseptic soaps and fumigators—all of which were made by Johnson & Johnson,” says chief historian Margaret Gurowitz

In addition to featuring the company’s products, the ads touted a free mail-order Household Hand Book that contained information on how to avoid contagious disease, the symptoms of different illnesses, and tips for disinfecting a home.

"While house-cleaning and disease prevention don't exactly make for light reading, they were apparently 'hot topics' during the early 20th century," Gurowitz says. "The Household Hand Book was really popular—Johnson & Johnson was flooded with requests for it!"