Share
For Mental Health Awareness Month, Tanara, who was diagnosed at the age of 27, shares her very honest story of coping with the disease.
By Tanara, as told to Paula DerrowMay 07, 2017
Today's Top Reads Close

I’ve always had a bubbly, happy personality. I love fashion and R&B music, having cookouts with my family and shopping—like any other girl, I love a good discount.

I'd always been a peaceful person, but you wouldn't have known that if you'd met me in 2011, just before I was sent to jail after getting into an altercation with a neighbor over a parking spot.

My family didn’t know what to think, and neither did I. I’d never been in trouble before. They knew it wasn’t the real me.

In 2007, I was 23 and attending college, while also working in a restaurant. I was one of the best servers; I didn’t even need a notepad to take down people’s orders.

But at the end of 2008, I started experiencing strange symptoms. I began feeling paranoid. I started seeing things, and hearing voices. I didn’t want to get dressed or even get out of bed. I didn’t understand what was going on.

By July of 2009, I was hospitalized. The doctors there thought I had a mood disorder—they thought maybe I was bipolar—and put me on a number of medications. But once I got out of the hospital, I stopped taking them. My symptoms were gone, so I assumed I’d be fine.

I was no longer taking classes, but later that summer, I was feeling well enough to get a job doing work like painting buildings at a camp.

Doctors thought I had a mood disorder because I didn’t tell them about my paranoia, or about suddenly hearing voices in my head.

Still, the memory of those strange symptoms lingered in my mind. In April 2010, when the symptoms returned and I began feeling paranoid again, my family convinced me to check myself into a psychiatric hospital.

The doctors there still thought I had a mood disorder because I didn’t tell them about my paranoia, or about suddenly hearing voices in my head. Instead, I would talk to them and just be me—happy, outgoing—so they thought I was having a manic episode.

They started me on some new medication, but when I was discharged four months later, I noticed that I was having side effects, like twitching. I wanted to go back to work as a server, but you can’t carry trays in a restaurant when you’re twitching! So I stopped taking my meds again.

The Breaking Point That Turned Into a Blessing

My grandmother got really sick around Christmas that year. When I saw her in the hospital with all those tubes, I just lost it. I got so hysterical that I had to be escorted out. Soon after that, I got into that altercation with my neighbor and was sent to jail. My symptoms were acting up and I felt so angry.

When I got out of jail, the judge said I had to go to a state psychiatric hospital. I was really nervous, but I talked to a psychiatrist there who made me feel comfortable. For the first time, I opened up about what I was experiencing—the voices, the paranoia. She said, “You are battling schizophrenia.” I didn’t even know what that meant.

She suggested that when I got out of the hospital and off the treatments I was taking there, I try a new treatment for schizophrenia. After weighing the risks and benefits, we both agreed the treatment, given through monthly injections, might help control my symptoms.

Meanwhile, I was doing better at the hospital. I made friends, and gained insight into my illness. During the week, there were movies, cooking classes and education sessions about my disease—basically, activities to help people like me get back into society. I learned about schizophrenia and what some of my triggers were.

All told, I stayed there for three months. It was hard, especially when my birthday passed, but I tried to have a little faith, and when doctors told me they were going to send me home in November 2011, that felt like a big triumph. There was light at the end of the tunnel.

This Clinical Trial Could Help Improve Caregiving for Schizophrenia Patients

I started a day rehabilitation program, and also started the new medication—the monthly injections. I was working hard to achieve my care goals by following my treatment plan. My schizophrenia symptoms were under control, and I started feeling better. I regained interest in the things I used to enjoy, like calling my family and going for walks in the park.

I will never forget what I went through, or what it took for me to get here. I don’t take any of it for granted. I consider myself an advocate for people who don’t have a voice.

With my schizophrenia symptoms under control, I felt confident that I was ready to get a job. I began reaching out to different restaurants and got some rejections, but I didn’t give up. I ended up getting a position somewhere and I did really well—I built a good relationship with my bosses and co-workers.

But I knew I didn’t want to be in the restaurant business forever. My dream was to get a professional job in an office, something I could do for the long term. I mentioned that to my caseworker and a nurse at the rehab program and they told me there happened to be an opening there for a peer support specialist. So I filled out an application, went for an interview and … I got it!

That was three years ago. I started out doing wellness checks on patients and taking them to doctor’s appointments and grocery shopping. After six months on the job, I was ready to get certified and take on more responsibility. I enrolled in a week-long course about the peer support profession and ended up with a 99% on my certification exam. 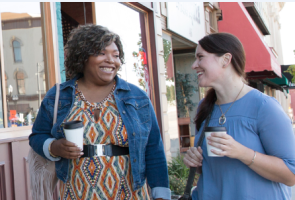 Now I’m helping other people living with schizophrenia set and execute goals that they never thought possible—and helping ensure that they have the same opportunities that I did.

Things looked bad for so long; I thought I’d be a server for the rest of my life. I kept telling myself I needed to have patience, but patience was a hard thing to have. I also worried that I’d never be in a relationship. But I've since met someone, and my boyfriend and I moved in together last September.

I’ve done a lot of soul-searching to get to this place. Now that I’ve come through that dark time, I feel humbled and grateful for everyone who supports me, like my family and co-workers.

As for the future, I want to broaden my advocacy work and learn about more ways to support the people I serve. I also want to be able to travel, and, like many women, get engaged and married down the line.

I will never forget what I went through, or what it took for me to get here. I don’t take any of it for granted. I want to be a role model for other people with schizophrenia. I consider myself an advocate for people who don’t have a voice. I honestly understand how patients feel about wanting to be better, how difficult it can be to figure out medication.

My goal is to help other patients get their confidence back. If you don’t have that confidence, you won’t ever feel that you deserve to be happy. I know because I lost my confidence for a while. I try to let them know it’s possible to have the happy and beautiful life you had before the diagnosis.