When the first cases were reported 35 years ago, it meant certain death. But thanks to advances in science, people with HIV can now lead healthy lives. People like activist Kevin Maloney, who's on a mission to ensure others like him get that chance.
By Camille ChatterjeeNovember 30, 2016
Share
Share
Today's Top Reads Close
W

hen Kevin Maloney was first told he had both HIV and Hepatitis C, he was, in a word, “scared.”

“I was working as a corporate travel agent for American Express in New York City and had to leave my job to take care of myself,” he says. Maloney, then 32, began to suspect that he might have HIV when he developed aches and flu-like symptoms that just didn’t seem to go away.

“My diagnosis was what I consider to be my rock bottom,” he recalls of that fateful visit to his doctor. “It took me a few years to really come to grips with it.”

But these days, Maloney is owning his status—and even empowering other people with HIV around the world to join forces, tell their stories, and live without fear through his popular Facebook page, Rise Up to HIV, and No Shame About Being HIV+, a campaign aimed at reducing stigma around HIV “one photo, one story at a time.”

And there are a lot of stories to share: Over 36 million people worldwide have HIV today. But thanks to ongoing scientific breakthroughs—from longer-acting medications that help make treatment easier to manage to real progress towards a vaccine—more and more people are able to enjoy long, fulfilling lives after a diagnosis.

Just look at Maloney, who’s back to working for American Express—and feeling good. “Living with HIV is an afterthought,” he says. “I take two pills in the morning and get on with my day.”

To commemorate World AIDS Day today, we decided to take a deeper look at Maloney’s life now, and shine a spotlight on how he’s working to ensure that people with HIV get access to timely diagnoses and treatments to thrive, just like him.

How has life changed for you since your diagnosis in 2010?

I can’t say I’m the same person, but I’m in a much better space today than I was when I first found out. Being diagnosed with HIV is life-altering, but it’s not the death sentence it once was. It’s a life sentence, as a fellow blogger says. It definitely made me a stronger individual.

My family members didn’t know much about HIV. When I called my father to tell him about my status, he dropped to the floor because he had no knowledge of HIV. His knowledge was stuck in the 80s, and he thought I was going to die. It took a few follow-up calls to educate him and let him know that I was going to be okay.

In the 80s, HIV treatments were harsh, and many people died from the treatments alone. Today, I have friends with HIV who take one or two pills a day, with little to no side effects. They work, they have families, and they’re healthier than some people I know without HIV.

What inspired you to start Rise Up to HIV?

It began as a personal blog for sharing my own story of living with HIV. I hate hiding, and I felt that the only way I could come to grips with my diagnosis was to talk about it.

And so I did, and I received such a positive response. It encouraged me that other people were dealing with this—people who were also coming from a very small town where HIV isn’t as talked about. So that’s when I got the idea to create the Rise Up to HIV Facebook page, where anyone could share their story.

I felt that if I could play some little role in getting the message out there that you don’t have to live in shame, maybe I could reach that one person who’s afraid to get tested or start treatment.

Two years later, you launched the No Shame About Being HIV+ storytelling campaign. How did that take your advocacy to a new level?

There was this iconic image of Chelsea Clinton in 2012 holding a “No Shame About Being HIV+” sign that was part of a much larger campaign by The Global Fund to fight the stigma of AIDS, tuberculosis and malaria. And I thought: I’m going to hold up a sign that says this, and post it on social media.

It received a huge response on my Facebook page—lots of likes, comments and shares. So I asked a friend, “Would you mind holding up a sign and sharing your story, too?” He did—and then more did. Soon I had a global campaign of over 650 people sharing their stories. It just snowballed.

It opened up a dialogue that people weren’t necessarily having, which was super-empowering. One story that stands out for me is that of Danielle Botello. She was born with HIV and recounted, in vivid detail, how she lost both parents to AIDS. Today, with the advent of newer medications, she’s thriving with HIV, and has a 6-year-old son who is HIV-negative.

The stigma of HIV is what keeps people from getting tested and into treatment, and staying on their medications. I felt that if I could play some little role in getting the message out there that you don’t have to live in shame, maybe I could reach that one person who’s afraid to get tested or start treatment.

Look around the world at all these people living with HIV—that was the impetus.

What more do you feel we need to do as a society to support people who have HIV? And what work will you continue to do to that end?

We need to take a hard look at how we can further assist long-term survivors living with HIV. While HIV treatments are helping to expand life expectancy, the fact is that people with HIV and AIDS have an increased risk for heart disease, cancer, kidney and liver disease, and other co-morbidities.

But many people don’t know this—and don’t get the follow-up medical guidance they need. In my case, I have a congenital heart condition, as well as high blood pressure, so I must take extra precautions.

I believe the advocacy work I’ve done—like being an advisor to the patient advocacy-focused HealtheVoices 2016 conference—and the campaigns I’ve created have helped to educate people about the disease.

But there’s more to be done.

Two months ago, I launched my latest campaign, “What’s Your Positive Message?” Its purpose is to harness the combined power of video and social media to show the world how people living with or affected by HIV are courageous, strong and thriving—and to let those people know they’re not alone.

I’m calling for video submissions from people who want to share a message of hope, love or wisdom about HIV, with the goal of hitting 1 million video views by today—World AIDS Day. I'll also be broadcasting live from Niagara Falls tonight, when the Falls turn red in commemoration of those who've died from HIV and AIDS.

It’s the least I can do to help reduce the stigma associated with the disease, while we wait for a cure for HIV, which I am hopeful I will get to see in my lifetime. 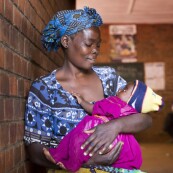 Want to help take part in the fight against HIV and AIDS?
You can support the cause through fundraising projects like Donate a Photo, Charity Miles or CaringCrowd.