"I've Learned I Don't Have to Apologize for My Psoriasis"

94
Alisha Bridges once lived in shame about her chronic skin condition, which causes itchy and scaly patches. Now she’s on a mission to educate and empower others living with the autoimmune disease. For Psoriasis Awareness Month, she's sharing her story.
By Meghan RabbittAugust 25, 2021
Today's Top Reads Close

When Alisha Bridges thinks back to her childhood, many memories still hurt. 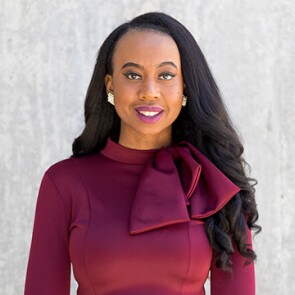 There’s the fifth-grade swim class when she was covered with itchy, flaky, bug bite-like psoriasis spots, and the other kids wouldn’t stop staring at her. Or that time in middle school when she got into a fight with kids who started a rumor that she had cigarette burns all over her body.

Then, there was the high-school drama class, when Bridges’ teacher wouldn’t let her share the makeup purchased for the cast of the school play, saying in front of everyone, “I don’t know what’s going on with your skin, so you can’t use it.”

Winter Skin Know-How: Why Do Psoriasis and Eczema Flare Up in Winter?

“I was diagnosed with psoriasis when I was 7 years old and for much of my youth, I was 90% covered with spots,” says Bridges, now a psoriasis advocate in Atlanta. “By the time I was 10, I realized I was different and felt so uncomfortable about my disease that I’d lie about it, telling people it was eczema because that was easier to understand. I didn’t want to be the center of attention—but I also couldn’t avoid it.”

And because psoriasis looks different on darker skin than it does on fair skin, Bridges felt especially isolated. "Having psoriasis in general is hard. But I definitely felt alone in the fact that I was a Black girl with psoriasis," she says. "There’s often this misconception that Black people don’t get psoriasis, and I think that's because we are often misdiagnosed. I even once went to a doctor who didn't think what I had was psoriasis because my spots were purple and brown instead of pink like they are on white skin."

Learning to Live with a Disease That’s Hard to Hide


For the more than 8 million Americans living with psoriasis, the kind of stigma Bridges faced—and the emotional toll it takes—is all too common. That’s because unlike so many other autoimmune diseases that are invisible, psoriasis shows up as itchy, flaky, bumpy spots that can appear anywhere on the body.

What’s more, the increased inflammation that happens as a result of the disease puts psoriasis patients at a higher risk of cardiovascular disease and diabetes. And about 30% of psoriasis patients also go on to develop a type of inflammatory arthritis called psoriatic arthritis (PsA). When she was in high school, Bridges became one of those patients.

With psoriasis spots all over her body and joint pain keeping her from exercising throughout her teen years, Bridges often felt so down that she denied her diagnoses. “I’d tell myself things like, ‘Oh, you’re sore because you were running around too much yesterday,'” she says. “I always tried to blame my symptoms on something else.”

Yet as much as she tried, she couldn’t outrun her psoriasis—and she realized that learning to accept her condition would make life easier in the long run. “It was an interesting process wrapping my head around the fact that my psoriasis and PsA won’t go away,” Bridges says. “Any time I have a flare, it’s a reminder that I have this disease. And even if I’m in remission, it’s nerve-racking knowing it can come back.”

One day, I realized I don’t have to apologize for my condition. It was as if every time I’d felt uncomfortable since I was diagnosed at age 7 had actually worked to build my resilience.

Luckily, Bridges has found treatments that help keep her skin lesions and pain in check. “They have helped me go stretches of time where my skin is 90% clear,” she says.

Working with a dermatologist who studies psoriasis and is up to speed on the latest clinical trials and research on treatments has also been a game-changer.

4 Truths People Living with Psoriasis Want Everyone to Know

While treatments have helped Bridges manage the outward effects of her chronic condition, facing the mental and emotional impact has been just as important.

“For so long, I lived in fear—always worried about what other people would think of my skin and going to great lengths to cover myself up if I had a flare,” she says. “Then one day, I realized I don’t have to apologize for my condition. It was as if every time I’d felt uncomfortable since I was diagnosed at age 7 had actually worked to build my resilience.”

Bridges likens the process to going to the gym: “You don’t get strong after one workout, but you will get stronger over time,” she says. “Along the way, I learned to exercise the ‘muscles’ that made me feel confident. Now I’m more confident than ever before.”

The Power of Leaning on Support—and Supporting Others


Finding a community of people facing similar struggles with psoriasis and PsA—physical and mental—was also key, says Bridges, who found an online support group in 2011 called Talk Psoriasis through the National Psoriasis Foundation. “That was a pivotal moment. Ultimately, it inspired me to advocate for others dealing with this disease.”
Share
Did you like reading this story? Click the heart to show your love. 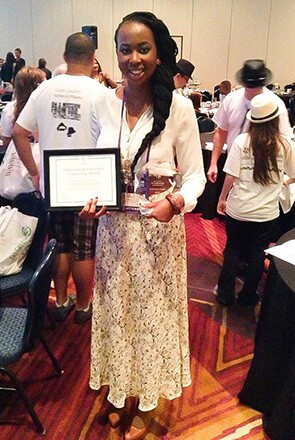 Bridges with the Psoriasis Innovator award

Just two years after connecting with the National Psoriasis Foundation, Bridges received their Psoriasis Innovator award for her advocacy work, which in turn led her to speak to Congress about the importance of psoriasis research.

"I want to help bridge the gap between African Americans and participation in clinical trials so we can receive better treatments, she explains. "Minorities aren’t well represented in psoriasis research. So compared to Caucasian groups, doctors don’t know as much about how we may respond to treatments or how psoriasis presents on darker skin."

Around the same time, Bridges also started blogging about her experience, finally able to express what she’d kept bottled up for so long.

“What I’ve learned is that if you don’t focus on your mental health, you’ll always feel like something is off,” she says. “I spent so much of my childhood ashamed of my skin and trapped in a cycle of self-loathing. It hasn’t been easy getting to a place of self-love, but I’m there now—and I’m on a mission to help other women get there, too.”

These days, Bridges doesn’t change her plans or go out and buy a new outfit to hide her psoriasis spots if she’s having a flare. “I’ve stopped dressing for my psoriasis,” she says. “Now I’ll go to the beach in a swimsuit—and it feels great.” In fact, on a recent girls’ trip to Costa Rica, she wore her bathing suit in front of a dozen other women despite her legs being mostly covered in psoriasis spots. “I didn’t feel uneasy or have any anxiety,” she says. “I accepted the fact that my legs were in a flare and decided I was going to feel confident.”

I want all psoriasis patients to know that it’s OK to speak up to doctors about what works and what doesn’t, and to find a different team if your current one isn’t able to handle your unique needs.

That’s not to say she doesn’t pick up on the stares of others every so often, or field rude questions about her skin. “Sometimes I say something when other people are staring, laughing, or being rude,” she says. “Other times, I don’t. I’ve learned to check in with myself first and ask, ‘How will I feel if I say something and don’t get a compassionate response?’ If I’m worried that saying something will make me feel bad in the moment, I ignore it. If I’m OK with whatever reaction I receive, I’ll call someone out.”

Bridges says taking care of herself in this way and getting to a better place mentally and emotionally has put her in a better position to help others, too—particularly other Black women, who not only often go undiagnosed but have specific concerns that many doctors miss.

“There are so many cultural differences that some dermatologists just don’t understand,” Bridges says. “For example, I wash my hair once a week, so prescribing a scalp treatment that requires washing my hair every day isn’t going to work for me. I want all psoriasis patients to know that it’s OK to speak up to doctors about what works and what doesn’t, and to find a different team if your current one isn’t able to handle your unique needs.”

Bridges tells people, when they're looking for a doctor to imagine they're interviewing them. "Go ahead and ask questions like, 'How much experience do you have with people of color or African American skin?' It’s so important to find a doc who has that expertise."

And she emphasizes how important it is to share your story. "I've found that African Americans are typically raised to keep our challenges secret and private. You don’t really go out and share what you’re struggling with and what’s going on in your household," she says. "We have to break that. You have to work your way up to feeling comfortable with being vulnerable. For those with the ability and courage to share their story, please do so. These doctors and researchers need to know our unique stories. That’s how we start to advocate for change."

Ultimately, Bridges hopes sharing her own story and hard-won advice will make a difference.

“If I can take something that really hurt me and negatively impacted my life and use it to help other people, that would be amazing.” 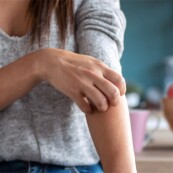 Do You Have Psoriasis?
Learn about a Johnson & Johnson advance in the condition.
Get the details