"Why I Decided to Undergo Facial Feminization Surgery"

229
For Pride Month, Lynn Discenza shares her transition journey and how gender-affirmation surgery helped her reclaim her confidence and be who she's always wanted to be. Plus, learn how Johnson & Johnson MedTech is working to help ensure more people have access to the life-changing procedure.
By Samantha VincentyJune 28, 2022
Today's Top Reads Close

In June 2021, Discenza, 65, underwent gender-affirming facial feminization surgery. While the two-part procedure—which was completed in March 2022—was just one aspect of her overall transition journey, Discenza says that the results have made her feel dramatically more happy and confident. “While this surgery isn't for everyone, I like it when people immediately know I'm female and it energizes me when they use my pronouns,” which are she/her, Discenza says.

“Seeing Lynn after she had healed reminded me why I do this—the radiance she emitted was tremendous,” says Michael Alperovich, M.D., Assistant Professor of Surgery at the Yale School of Medicine, who performed both procedures, in part using tools created by DePuy Synthes, part of Johnson & Johnson MedTech. “She's happy in her day-to-day life, and I think that's in large part because people now treat her the way that she should be treated.” 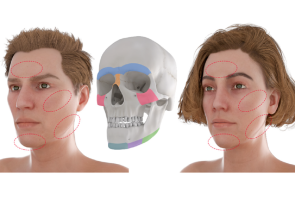 Facial gender-affirmation surgery can include procedures such as forehead and brow reduction, rhinoplasty, contouring and more

In addition to medical devices like 3D-printed tools, guides and models, DePuy Synthes offers virtual surgical planning and personalized implants that can assist surgeons in achieving their patients’ desired goals through its TRUMATCHTM CMF Personalized Solutions, powered by Materialise. In December 2021, DePuy Synthes held its first-ever Facial Gender Affirmation Surgery Summit to help educate more surgeons about procedures that are part of facial feminization surgery. (The course was focused on facial feminization surgery because it's more common than male muscularization surgery, but the DePuy Synthes team offers solutions for both types of procedures.)

Discenza sat down with us to share her experience with the procedures and explain how they transformed her body, and her sense of self, for the better.

Discenza: “I came out as transgender three years ago, at the age of 62. A few years before that, a new friendship with a trans woman had helped me realize I could actually transition and live authentically as the woman I felt myself to be. While my fears that my then-partner would leave after my coming out were realized with our subsequent breakup, support from my sister, brother and 92-year-old mother gave me the courage to move forward. It was wonderful just dressing and being in the world as a woman, though I wasn’t thinking about how I looked, per se.

But a year into presenting as female without any surgery, people around me were telling me I didn’t really pass as a woman. That didn’t feel good. I realized I wasn’t comfortable in public or coming out to my customers at work. And I wanted to be safe, too—some people don't respond too well to what they consider ‘men in makeup.’ I also wished to fit into women’s circles; I don’t want to stand out.

I realized that the very first thing people see is my face. In my trans support groups, I met other women who’d had facial feminization surgery, and I decided it was something I wanted to pursue.

Making the Decision to Undergo An 11-Hour Procedure 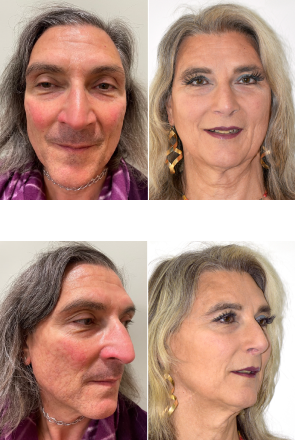 Discenza before and after her procedures

I had one appointment with a plastic surgeon who made me feel so self-conscious: The first thing the guy said to me, unprompted, was, ‘Oh, we can do something about your breasts.’ I was like, ‘Wait, no!’ They were trying to sell me all kinds of stuff I hadn't asked for, and it didn't sit right.

A few women I spoke to recommended going to Yale. When I met Dr. Alperovich for our first consultation, I told him, ‘I want to look more feminine, right from the first impression when I walk into a room.’ He looked at me as if through the lens of an artist and explained the ways he could create more typically female traits, such as reducing my brow and performing rhinoplasty. Like other women in my Italian-American family, my nose is my most prominent feature! Dr. Alperovich assured me, ‘You’re still going to look like you, but softer.’

Break a Bone Badly? You Could Be a Candidate for This Innovative 3-D Printed Medical Device

After doing more research—and asking more women about their results and what to expect—I went back for a second visit and told Dr. Alperovich I wanted to go ahead with the surgery. I embarked on the process of gathering the documentation required to schedule the procedure. In the months before the surgery date, I did experience some nervousness. My kids were especially apprehensive because of the risks that come with any major procedure. So it was about weighing the pros and cons. But I decided in the end that the result would be worth it.

The surgery took 11 hours; I got the whole kitchen sink! My hairline was lowered, my brow lifted and shaved down as well as my nose and chin bones, and I had fat grafting done. I was in the hospital for three nights.

Afterward, I experienced swelling and black-and-blue spots that disappeared within a few weeks. I was glad that I’d already learned about the facial desensitization I might experience through my conversations with others who’ve had the surgery, so it wasn't a shock to me that I can't feel the tip of my nose the way I used to. Six weeks later, though, when I could put my makeup on and go out, I looked in the mirror and thought what I saw was pretty cool. Even though my nose was still swollen, I could see the difference. By two months later that same summer, I started feeling really good—and taking more selfies! I was so elated about how much more feminine I looked. I couldn’t stop taking and sharing all these pictures of myself while hiking.

The following spring, I had an outpatient procedure to shave my larynx down and shorten the distance between my lip and nose. 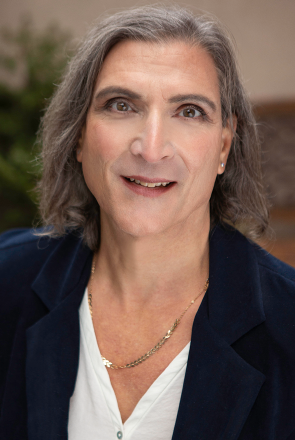 When you’re a cis woman, no one addresses you as the wrong gender. As a trans woman, I wanted to overcome misgendering for my mental health and my physical safety. For instance, I travel across the country for work. These days, I can go into gas stations anywhere without worrying that I will be targeted for being different.

"Everyone Deserves to Feel Safe": Meet a Johnson & Johnson Leader Who's Proud to Be an Ally for the LGBTQIA+ Community

Before the surgery, there were people who told me, ‘You look fine, you don't need an operation,’ which was very kind. But afterward, it was funny to hear them change to, 'Oh, I know I said that, but you really look beautiful!'

Now, the negative people in my life, such as some of my relatives who aren’t trans-friendly, don't really accept me. They haven't changed. But how I’m treated in public has. Before, I was getting misgendered—I’d go to the grocery store, and it was, ‘Sir, sir.’ That hasn’t happened at all since the surgery, and I'm just so happy about that.”

Clinical outcomes and feelings after gender-affirmation surgery may vary from Discenza's personal experience. Consult with your healthcare provider to learn more about the risks and benefits of gender-affirmation surgery options. Should you experience any adverse effects post-surgery, please report them to your healthcare provider. This article is not an endorsement of Dr. Alperovich. 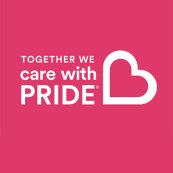