Share
It was the strongest earthquake on record in Japan—and it devastated Tohoku. In observance of the United Nations' International Day for Disaster Reduction, we tell the stories of survivors-turned-students of the Tomodachi J&J Disaster Nursing Training Program, who are transforming personal tragedy into hope for the future.
By David CapraraOctober 10, 2018
Today's Top Reads Close
O

n March 11, 2011, Shiori Hikichi was celebrating her graduation from middle school in Fukushima, Japan. It was supposed to be a day symbolic of hope and growth toward a bright future—but nature delivered a different lesson.

A 9.1 magnitude earthquake—one of the strongest ever recorded—took place off the coast of Japan. Not only did the earthquake cause tremendous damage in the Tohoku region, but it sparked a devastating tsunami. The waves reached 130 feet high, traveled as far as 6 miles inland and severely damaged several nuclear reactors inside the Fukushima Daiichi nuclear power plant.

Nearly 16,000 people died in the 3/11 disaster, as it is also called—and around 470,000 more were displaced. Hikichi’s grandmother was one of those who lost her home, situated just 15 miles from the nuclear power plant.

Her grandmother's house served as a center for family gatherings, and Hikichi used to go there almost every week as a child collecting acorns in the yard, and playing alongside the neighboring clear streams. But radiation levels are so high now, Hikichi was told, that no one will be able to live there for years. 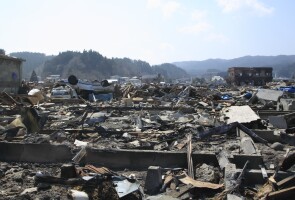 “Even after we learned that we wouldn’t be able to go back, it was still somehow hard to believe,” she says. “It felt like a hole had opened in my heart. I felt so powerless.”

The hardships following the Great East Japan Earthquake and Tsunami were overwhelming, with people waiting in long lines for food. “It was so cold outside,” Hikichi recalls. "An older man collapsed right in front of us. My mother is a nurse, and she stepped in and performed CPR and saved him. I saw that up close and thought: I want to work in the medical field. I want to become someone who can save others."

Like Hikichi, Ayaka Sasaki also had grandparents who were impacted by the disaster. They lived along the coast in Miyagi prefecture, in the small city of Ishinomaki—one of the places rocked hardest by the tsunami.

“We didn’t have any cell service and I couldn’t get in touch with my family, so I was really scared,” says Sasaki, who was in her third year of high school at the time. Weeks after the disaster, she and her family were finally able to visit Ishinomaki, but her grandparents’ house was gone. They searched in desperation for her grandparents at all of the emergency evacuation spots to no avail.

“After about half a year, we got a notice from the police that they'd found a portion of my grandmother’s remains, identified through DNA,” Sasaki recalls, holding back tears. “But my grandfather is still missing.”


The word “tomodachi” means “friend” in Japanese. In the aftermath of the disaster, Johnson & Johnson worked with the U.S.-Japan Council (Japan) to create the Tomodachi J&J Disaster Nursing Training Program to help support reconstruction efforts by providing nursing students from Tohoku with leadership skills and international disaster relief training so they could help their communities today and in the future.
Share expand 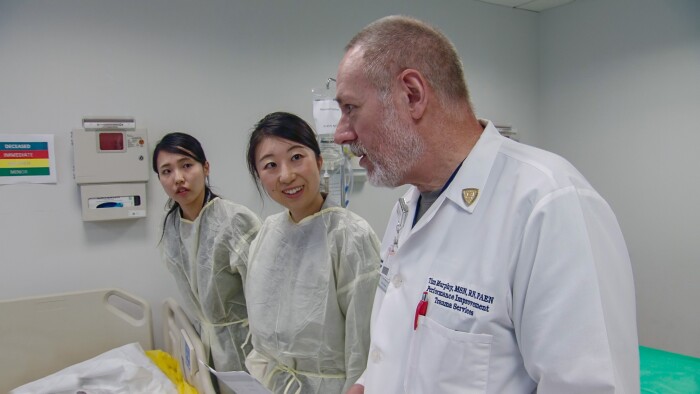 The program, now in its fourth year, takes place over the course of seven months, and counts 28 people among its graduates. Hikichi and Sasaki, now 23 and 26, respectively, are two of this year’s seven Tomodachi participants.

Supporting nurses has been at the heart of Johnson & Johnson's work since the company was founded more than 130 years ago. Nurses are referenced in the first line of the Credo, the company's mission statement. And the company was responsible for creating the Campaign for Nursing's Future in 2002, which helped address a then-dire nursing shortage in the U.S. This fall, the program was relaunched, with a new focus on elevating the work of nurse innovators.

All of this work is core to Johnson & Johnson's overarching mission to help change the trajectory of health for humanity—a goal that wouldn't be possible without supporting people at the very front lines of care, from nurses to midwives, through programs like Tomodachi.

In addition to undergoing training in Japan that includes visits to some of the hardest-hit areas affected by the 3/11 disaster—where many people are still living in temporary shelters—another critical part of Tomodachi training takes place in the U.S. This year, students spent 10 days visiting facilities and organizations that specialize in disaster medicine and nursing, including NYU Langone Medical Center, the Georgetown University School of Nursing & Health Studies and National Guard headquarters. The goal: expose the participants to training methods that might not be standard in Japan, such as active shooter drills and the use of live actors to simulate disaster situations. 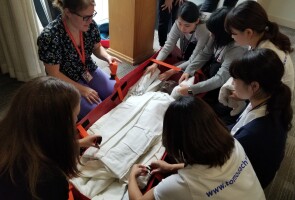 “It helps bring connectedness,” Yasumura explains. "It takes them out of their memories of lost friends, family, houses and communities, and redirects their focus to people who they can empathize with. It then creates a sense of a shared mission in being able to do something about disasters in the future."

For many of the students, it's also the first time they're sharing their very personal stories of loss and grief with others.

“One important thing that the participants learn through this sharing is that, as nursing students, it’s necessary to find time to heal in order to heal others,” explains Aya Hashimoto, Program Manager, Tomodachi Initiative, U.S.-Japan Council (Japan). “They learn to take care of themselves.”

Yuka Midorikawa, a 2016 program graduate, says that being able to share her 3/11 memories with others provided her an emotional opportunity she hadn’t had before.

“There were students who had all kinds of experiences, and as I shared my story with them, I realized we had a lot of the same thoughts and feelings,” she recalls. “Even now, I think it really helps me with my mental health.”


Upon their return to Japan, participants work alongside mentors to help them integrate what they learned back into their local communities—and that impact is often enduring. One participant from the 2016 program, Haruki Sawada, 21, took what she learned in the U.S. and launched a disaster countermeasure club at her college, which is active and enjoying growing membership.

“We made an emergency preparedness manual and worked on showing people what to do during disasters,” Sawada explains. “At school and health festivals, we also taught people about the kind of emergency first aid you can do with everyday items.”

And although it is not a strict requirement for entry into the program, many participants go on to pursue successful careers in nursing. Midorikawa, 28, is now working as a nurse in Tokyo. 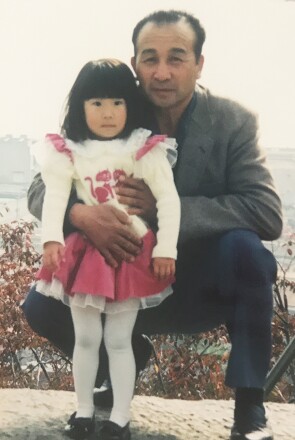 A young Ayaka Sasaki with her grandfather Kiyoshi, who perished in the 2011 disaster

“My hospital accepts international patients,” says Midorikawa, “and I feel like, because of the program, I can better help them—that’s a big thing I’ve taken from Tomodachi.” Plus, with the Summer Olympics coming to Japan in 2020, she adds, her international experience will be even more useful.

The success of the program is so gratifying and evident that organizers have even more ambitious plans. “We want to continue our focus on Tohoku, but disasters happen all the time ... and not just in Tohoku,” explains Hashimoto. “So we plan to expand the program nationwide.”

As this year’s participants continue the program, they remain reflective of how their own tragedies are being transformed into a force for good.

“My grandparents would probably feel happy and think, ‘Our granddaughter has grown so much, using our experience, our deaths, as a catalyst to come this far.’ I think they’d say, ‘Do your best. Thank you.’ ”

Meet more students from the Tomodachi J&J Disaster Nursing Training Program in this video—and learn why, after the disaster, they decided to become nurses. 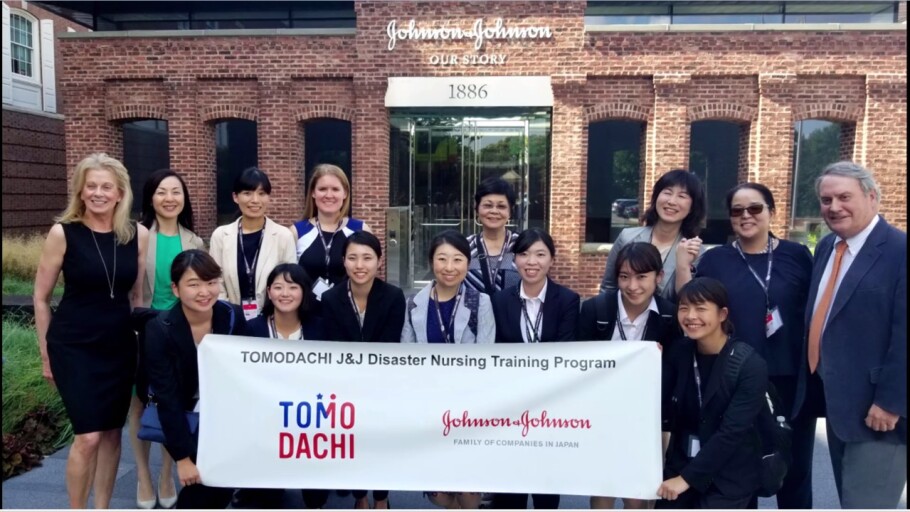 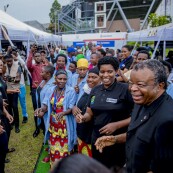 Check out the 2019 Health for Humanity Report
Read about all the we provide solutions for some of the world's most pressing global public health challenges to advance better health for all.
Learn More