53
If people of color aren't well represented in healthcare, then communities of color cannot receive truly equitable healthcare. These unique programs are supporting physicians from racial minority groups so they can better support the patients who need them.
By Tamekia ReeceFebruary 01, 2022
Today's Top Reads Close

There’s no way to deny it: Historically marginalized communities in the United States have faced serious inequities in this country when it comes to healthcare. These diverse communities have higher incidences of, and death rates from, diseases like heart disease, stroke, cancer, diabetes and even COVID-19. They also have lower rates of health insurance, which means they may not have access to healthcare—and the care they do get often isn’t equal to what their white counterparts receive.

Johnson & Johnson has been working hard to address these inequities through numerous initiatives, from investments in technologies that reach the most vulnerable patients in this country to its Health of Women team, which is dedicated to improving health outcomes for Black mothers, who are three times more likely than white women to die from pregnancy-related issues.

In November 2020, the company launched Our Race to Health Equity: a five-year, $100 million commitment to address the inequities and systemic racism that contribute to poorer health outcomes in communities of color in the U.S.

One key focus of their efforts? Increasing diverse representation in the healthcare workforce.

Studies show that patients prefer doctors who share their same race or ethnicity. And when patients from underserved communities are treated by people of their own race or ethnicity, they have better health outcomes, including improved medication adherence and confidence in recommended treatments.

But finding a physician that has your background can be difficult if you’re Black or brown. African Americans account for only 5% of doctors, and just 5.8% of doctors identify as Hispanic.

To help foster doctor diversity, Johnson & Johnson has collaborated with several organizations that aim to promote equity in three areas of medicine—optometry, surgery and clinical trials—that have considerable gaps in representation. We spoke to healthcare practitioners who’ve participated in these programs to learn how they’re changing the face(s) of their fields for the better.

Despite comprising 13.4% of the U.S. population, only 1.8% of practicing optometrists are African American, and just 3.2% of students and 3.8% of faculty in optometry colleges are Black or African American, according to Black EyeCare Perspective, a not-for-profit organization dedicated to creating a pipeline into optometry for Black students.

These statistics led the group to create the 13% Promise, a pledge to make the representation in optometry match that of the African American population. By 2025, their goal is to reach 13% Black representation in all areas of vision care, including eyecare companies, colleges of optometry and optometry boards.

In September 2021, Johnson & Johnson Vision (J&J Vision) announced a collaboration with the Black EyeCare Perspective and became the first major eye health company to sign the 13% Promise. As part of that collaboration, J&J Vision is supporting diversity programs at optometry schools such as the New England College of Optometry (NECO)—the first college to join the 13% Promise. 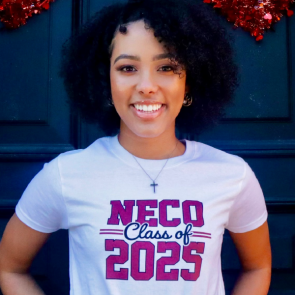 Soto first grew interested in optometry after an eye doctor she visited at age 12 was so engaging that she began looking forward to her yearly eye exams. Later, as a first-generation college student interested in the field, she oftentimes felt alone. “I had to find out everything on my own, and I made mistakes like taking certain classes at the wrong time,” she says. In fact, it wasn’t until her senior year that she learned there were two other optometry students at her school, she says.

Guiding optometry students on their career path is the exact point of the 13% Promise. At NECO, that’s accomplished through the Black EyeCare Perspective Pre-Optometry Club (BEPPOC), the first and only virtual pre-optometry club for Black students interested in optometry.

Now that she’s part of BEPPOC, Soto says she gets ample guidance and support from fellow students of color.

“It’s almost like an intracultural thing in that you understand each other on a different level, you feel more relaxed and you’re able to relate better to your peers, which provides a different type of comfort,” she explains. “We ask and answer each other’s questions, we share study tips, we share our struggles and we celebrate the successes. It’s an uplifting community.”

Mentorship opportunities are also plentiful. “At every BEPPOC meeting, there's a different doctor or representative from a school that comes in, and they’re so open to giving advice,” Soto says. BEPPOC also arranges one-on-one professional development meetings for members. As a result, Soto says, she’s built meaningful relationships with doctors and other vision industry professionals around the country.

The 13% Promise effect at NECO hasn’t just been beneficial for Soto: In 2021, the school saw an 80% increase in applications from Black students and a 37% increase in applications from Hispanic or Latinx students compared to the previous year. And the number of Black or African American students entering as freshmen last year increased by 150%, while the Hispanic student population increased by 200%. That’s thanks in part to scholarships NECO obtained for Black students and first-generation students after signing on to the 13% Promise pledge and actively recruiting more minority students.

Soto, who’s in NECO’s class of 2025, plans to go into community health when she graduates. “I’m specifically interested in ocular disease because it predominately affects African Americans,” she says. “I want to focus on catching and treating those diseases.”

While most people think of surgery as taking place in a hospital or medical center, academic surgeons are members of a medical school department of surgery and work to advance surgical science through research and innovation, as well as to train up-and-coming doctors in the field.

"We Have a Health Disparities Problem in America": Meet a Woman On a Mission to Improve Healthcare for Black Women

In 2019, white surgeons held 77% of chair positions and full professorships in American medical schools. Black and Hispanic surgeons held only about 3% to 5% of those same positions. 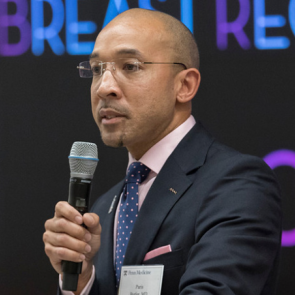 Paris Butler, M.D., M.P.H., FACS, now assistant professor of plastic surgery at the University of Pennsylvania Health System, participated in the first DSI program when he was a resident.

“Speaking as someone who trained at an institution where there were no Black or brown faculty, as a Black or brown trainee, you can feel quite siloed,” says Dr. Butler. “With more academic surgeons from racial minority groups, we think there will be an increase in research highlighting issues specific to those groups.”

Each year, SBAS will choose cohorts of 10 to 15 residents to participate in the DSI. Over a multiyear period, Ethicon will work with the cohorts to provide training that includes surgical anatomy, basic laparoscopy and suturing; lectures about anatomy, physiology and pathophysiology, clinical scenarios and more, says Terrence Fullum, M.D., MBA, FACS, co-founder and director of the DSI and professor of surgery at Howard University College of Medicine. Residents also get to perform surgeries, first using simulators and then live models.

Beyond providing surgical knowledge, the DSI tracks the residents’ careers and offers long-term networking and mentoring, giving residents exposure to surgeons and fellowship directors at some of the top programs in the country, says Dr. Fullum. It also encourages the soon-to-be surgeons to become mentors to the next generation of surgical residents.

So far, so good: Of the original DSI cohort, which included 76 diverse surgical residents, 99% completed general surgery residency, 87% completed subspecialty fellowships, 87% became board certified and 50% received fellowship in the American College of Surgeons. What’s more, 76% have contributed to peer-reviewed literature, and 41% went on to obtain faculty positions.

Still, the goal is to make the DSI 2.0 even better. “We want to use the newest technologies and techniques, doing not only minimally invasive surgery but open procedures as well,” says Dr. Fullum. “That will give us a broader range of residents who are interested and allow those who are going into some of the surgical subspecialties to pick up on some good skills and acumen.”

It’s a well-known fact that there’s a huge disparity among races, ethnicities and genders when it comes to clinical trial participation: In 2019, 77% of people in all clinical trials were white.

The Double Pandemic: How COVID-19 Is Bringing to Light Health Inequities That Have Long Been a Problem in America

When clinical trials don’t reflect the gender or ethnic makeup of the populations using the medications being studied, their results reflect an inaccurate picture of whether therapies are safe and effective for the patients that will be using them.

One way to boost representation of people of color in clinical trials is by bringing in more doctors of color—people whom typically underrepresented patients can trust—to lead these research studies.

Since 2019, the Janssen Pharmaceutical Companies of Johnson & Johnson have focused on being more inclusive of members of groups historically underrepresented in clinical research. As part of this work, last year Janssen and Merck began co-sponsoring and funding the National Medical Fellowships Diversity in Clinical Trials Research (NMF Dctr) program, which trains clinicians of color to serve as Principal Investigators (PIs) in clinical research.

Doctors who are part of NMF Dctr learn the basics of being a successful principal investigator, the standards of good clinical practice and how to develop research protocols and work with pharmaceutical, biotech and medical device companies. They also learn how to handle barriers to clinical research participation and increase recruitment of populations that are historically marginalized by clinical research.

At the end of the 8-week program, participants will receive ongoing support and networking as they begin to work on their own clinical trials. 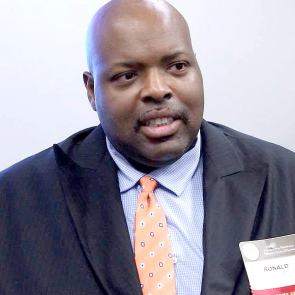 Ronald Rembert Jr., M.D., who’s part of the first cohort of doctors in the NMF Dctr program, is a family medicine physician in Chicago with experience running clinics and organizations in communities of color.

One clinic in a struggling community was about to close before Dr. Rembert took it over. “We went from being on the verge of shutting our doors to doing over 15,000 patient visits a year.”

“I deliberately looked for qualified people of color to fill certain positions in the communities that we were serving," he explains. "Because I understood that those people, who were not only qualified but had a sense of connection to the communities we were serving, would more than likely be able to get better outcomes. And that's what happened.”

This understanding, Dr. Rembert believes, is crucial to the NMF Dctr mission.

“Having a culturally sensitive group of individuals administering these trials can help in terms of fully explaining and being transparent about the trial protocols,” he says. And it can be reassuring for marginalized communities to see that people of color are actually participating in the trials themselves as researchers, he adds.

Ultimately, Dr. Rembert says, being more inclusive in clinical research will ultimately benefit the health of all people.

“If we’re able to get the biggest and broadest sample size of people included in trials, we can see the effects of therapeutics on people across the board,” he explains. “That will allow us to come to better conclusions with far more data and be able to harness that data for everybody’s benefit.” 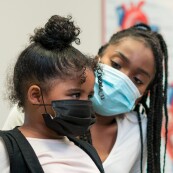 Johnson & Johnson Is Committed to Fighting Racial Injustice
Learn more about how the company is promoting and investing in solutions to help drive health equity for people of color across America.
Go here 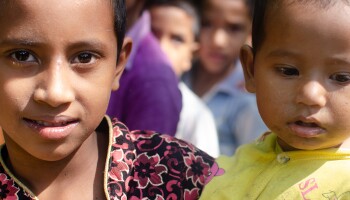