Share
It's the quintessential New Year's resolution—and perhaps one of the hardest to tackle. But with these behavior-based tweaks, getting to (and staying at) a healthy weight can be doable.
By Amanda KellyJanuary 14, 2018
Today's Top Reads Close

Throughout the month of January, we’re serving up a series of “New Year, New Healthy Habits” articles on how to tackle common bad health habits by adopting some simple behavior change techniques. We kicked off the series with tips on how to slay stress and get more sleep. This week, we’re looking at another prevalent health concern: how to lose weight for the long term.

8 Easy Ways to Stick to Your New Year’s Resolutions (Really!)

There’s a reason your local gym is packed this time of year: January is prime time for tackling weight loss resolutions. And although roughly a quarter of American adults vowed to shed pounds in 2017, the hard truth is that they may have found themselves doing so in the years that followed, too, since almost 50% of people wind up setting the same goals year after year, according to a Harris Poll.

That's because weight loss is hard—and harder still when you attempt it without a plan in place. That’s why we spoke to the experts to learn how to implement truly sustainable changes that can help set you up for success—like these four fairly simple behavior change tips.

Reframe Your Reason for Losing Weight

In general, there are three primary reasons why people want to lose weight: to look better, to feel better or to overcome a health issue, like type 2 diabetes, notes Kevin Wildenhaus, Ph.D.

“If you look at these three drivers, what they all have in common is they all relate to the idea of improving quality of life,” he says. “When you change your mindset from thinking ’I want to lose weight’ to ’I want to improve my life,’ the whole endeavor becomes a different story.”

It becomes far more likely to be successful, too, he adds, since thinking about weight loss as an ongoing investment in your future, rather than just a short-term plan, can majorly increase your incentive to stay on track.

So think of that morning power walk as a way to boost your energy and clear your mind for the day ahead, rather than something you have to do to hit a certain number on the scale. Or team up with a workout buddy so trips to the gym become as much about connection as burning calories.

Adopt Some Routine Habits of the Successful

Unfortunately, there really is no quick fix for losing weight. While following a very restricted low-calorie diet or meal plan can be an effective way to shed pounds on a deadline, the vast majority of people who go this route will gain the weight back eventually, notes Wildenhaus, since it tends to be hard to maintain such a strict regimen.

Instead, he advises, make changes to your routine that you can stick to for the long haul.

According to the National Weight Control Registry, which tracks over 10,000 people who have lost significant amounts of weight and kept it off long term, 94% of these success stories exercise regularly and consume low-calorie diets.

A few to try: According to the National Weight Control Registry (NWCR), which tracks over 10,000 people who have lost significant amounts of weight and kept it off long term, 94% of these success stories exercise regularly (most of them by walking) and consume low-calorie diets (discuss what's healthy for you with your doctor). Seventy-five percent weigh themselves once a week, and 62% watch fewer than 10 hours of TV per week—that's compared to the national average of 28 hours weekly.

6 Things We Now Know About Obesity

If you’re thinking that these strategies sound like pretty standard weight loss advice, you’re right. And there’s a reason for it: They work. Participants in the NWCR, for instance, have each lost about 66 pounds and kept it off for 5 1/2 years, on average.

Sometimes, the hardest part of sticking to weight loss habits is surmounting what Wildenhaus calls “the commitment hump.” By this, he means the mental hurdle of actually going through with heading to the gym or shopping for healthy ingredients at the grocery store.

To help conquer that hump, he advises baking a simple habit into your weekly schedule: putting your workouts, grocery trips and time for meal prep on your calendar like you would any other appointment, so these decisions are already made for you.

And if your best-laid plans go awry, try what Wildenhaus calls “implementation intention.”

“Basically, it means you make a rule for yourself: If X happens, then you do Y,” he explains. So if you aren’t able to eat a healthy breakfast because you’re traveling and stuck with airport options, for instance, promise yourself that you’ll skip dessert that night. This way, nothing is left to chance, but you also have a bit of flexibility to handle life changes and bumps in the road.

Delay Gratification—and Really Savor It When You Do Indulge

Anyone who has tried to lose weight can likely tell you that eliminating certain foods entirely is a recipe for disaster. And there’s science to back this up.

A study published in the Journal of Personality and Social Psychology found that participants who were shown a bowl of candy and told they could have some later on if they were still hungry ate less and had fewer cravings that those who were told they could have no candy at all. This suggests that it’s easier to steer clear of foods you don't want to eat often by reminding yourself you can have them at some future date, rather than depriving yourself of them completely.

One way to put delayed gratification into practice, according to Traci Mann, Ph.D., Professor of Social and Health Psychology at the University of Minnesota and author of Secrets from the Eating Lab, is to eat your veggies first at a meal. Filling up on those initially will help keep you from overeating higher-calorie food later in the meal.

“When you go to a restaurant, you always eat the salad they bring first,” she says. “Why not do that at home?”

And when you do treat yourself—which you should always do, even when you’re in the process of losing weight, to make your eating plan more sustainable—make sure you actually enjoy the indulgence.

“My husband eats very healthily all day but has a couple of cookies every night—it’s his thing,” says Mann. “And he really enjoys them. If we’re watching TV, we have to turn off the show so he can focus on those cookies, so he gets the full satisfaction of eating them.”

So instead of taking little bites of indulgent things here and there, treat yourself to a reasonable serving of something delicious—then sit down and really savor it, Mann recommends. You deserve it! 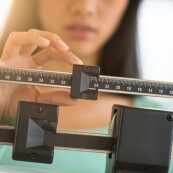