6 Things We Now Know About Obesity

Share
Over a third of Americans qualify as obese, but misconceptions abound as to what's causing the global health epidemic. (Hint: It's not just about diet and exercise.) We talked to obesity experts about the latest science-backed findings and current research underway.
By Hallie LevineOctober 10, 2017
Today's Top Reads Close
I

t’s no secret that obesity is considered by many experts to be a global health epidemic right now.

In fact, according to the National Institutes of Health, more than 70% of American adults are carrying around too much weight, and over 37% are considered obese, which means they have a body mass index (BMI) of 30 or higher.

And the effects of those kind of numbers can be life-threatening. According to the Centers for Disease Control and Prevention (CDC), the condition can put people at risk for many of the leading causes of preventable death, including type 2 diabetes, heart disease and even certain types of cancer.

Diabesity: The Pandemic Impacting Populations Around the Globe

“Obesity is overtaking smoking as the #1 preventable cause of cancer, and we consider it to be one of the largest global public health threats,” adds James F. List, M.D., Ph.D.

And the problem is expected to get worse over time: By 2025, it's projected that some 2.7 billion adults worldwide will be overweight or obese, with 177 million adults requiring treatment for severe obesity.

It’s a crisis that Johnson & Johnson takes seriously, which is why the company has devoted significant effort into investigating the disease. “We have a moral obligation as the world’s largest healthcare company to do something about it,” says Dr. List.

On World Obesity Day, we're taking a look at six important things everyone should know about the condition—including the latest thinking on how to help prevent and control the disease.

Obesity is a real disease that can be rooted in the brain.

When it comes to obesity, the common belief is that it’s simply due to overeating and being too lazy to exercise.

But the truth is far more complicated than that.

“When you gain weight, the nerves in your hypothalamus that conduct signals from your fat cells to the rest of your brain become damaged,” explains Louis Aronne, M.D., Director of the Center for Weight Management and Metabolic Clinical Research at Weill Cornell Medical College. “As a result, your brain doesn’t realize you’re full, so you keep eating.”

And once you’ve become overweight or obese, your body produces hormones, such as insulin, that increase fat storage, so you’re more likely to hold onto excess weight as fat.

“So it’s not that it’s someone’s fault—there’s literally something physical going on making it hard for someone to lose weight,” explains Dr. Aronne.

Keeping weight off long term is difficult—and a lot of it is due to hormones.

Here's a sobering statistic: More than 80% of successful dieters end up gaining back all of the weight they lost within about two years, according to a UCLA review of over 30 studies.

Try following the lead of folks enrolled in the National Weight Control Registry: eating breakfast daily, weighing yourself at least once a week, limiting TV time to less than 10 hours a week and exercising at least an hour a day.

As Dr. Aronne explains it, once you start losing a substantial amount of weight—at least 10% of your body weight—you go into “starvation mode.” In an effort to get you to eat more, your system slows its production of leptin (a hormone that suppresses your appetite), while at the same time pumping up levels of the hunger hormone ghrelin. The result: You constantly feel famished, which can lead to consuming more calories than you burn.

There is hope, however.

For starters, try following the lead of folks enrolled in the National Weight Control Registry, which tracks more than 10,000 people who've lost an average of 66 lbs.—and kept it off—for more than five years. The individuals in the registry all practice these habits: eating breakfast daily, which could give you more energy for activities and make you less likely to eat high-calorie foods later in the day; weighing yourself at least once a week; limiting TV time to less than 10 hours a week; and exercising at least an hour a day.

If an hourlong workout sounds daunting, know it doesn’t have to be all at once: 30 minutes of walking the dog in the morning, a 15-minute stroll during your lunch break and 15 minutes after dinner totally counts.

To help make squeezing it all in a little easier, Johnson & Johnson has a workout app that breaks full-body workouts down to just seven minutes a pop.

“If you can comply with a 1,200-calorie-a-day diet, you’ll lose weight,” Dr. Aronne says. “But the big word here is compliance. It’s extremely hard for people to stick to such a low-calorie diet for very long.”

Oftentimes, he says, a lower-carbohydrate diet—in which people consume about 30% of their calories from protein and the rest from low-glycemic foods—can be easier to follow because it’s less likely to trigger hunger pains. Low-glycemic foods—non-starchy vegetables, nuts, beans and some fruits—don’t raise your blood sugar quickly, which can cause feelings of hunger.

“And the best time to eat carbohydrates is toward the end of the meal,” adds Dr. Aronne. “I tell patients to start with vegetables and proteins, and eat their starch last.”

This method of eating can help reduce your body’s blood sugar and insulin levels following a meal, according to research Dr. Aronne presented at the Obesity Society in 2014. “This advice translates into less appetite, plus our patients find it easy to follow,” Dr. Aronne explains.

Another technique, with solid research behind it, is intermittent fasting.

“We tell patients to go down to about 800 calories two days a week, and the rest of the time to simply follow a healthy diet,” Dr. Aronne says. “This way, people can focus their mental energies on [sticking to a stricter diet] those two days, and since they are not eating much, it gives their hypothalamic nerves time to recuperate.”

One University of California study found that people who, over the course of 90 days, slashed their calories from a third to a half for five days each month lost significant amounts of abdominal fat. They also improved risk factors linked to heart disease and diabetes, such as levels of glucose and C-reactive protein (a measure of systemic inflammation).

Note: Consult your physician before trying any weight-loss method, so your doctor can help advise whether it's a good plan for you.

Bariatric surgery can be a game-changer for certain patients.

If you have a BMI over 40, need to lose more than 100 pounds or your BMI is over 35 and you also have an obesity-related health condition, such as high blood pressure or type 2 diabetes, then you may be a candidate for bariatric surgery.

Bariatric surgery comprises a range of procedures, including gastric bypass (an operation that reduces the size of your stomach), sleeve gastrectomy (which removes about three-quarters of your stomach) and adjustable gastric band, in which a band is placed around your upper stomach.

These procedures lead to weight loss “by causing food to go more rapidly to your lower intestine, which in turn sends a signal to your brain that you’re full,” explains Kirk Ways, M.D., Ph.D.

The surgery doesn’t seem to cause the same hormonal and metabolic changes we see with regular weight loss, so you’re less likely to regain weight. It’s also been shown to improve other obesity-related diseases.

According to the American Society for Metabolic and Bariatric Surgery, almost 200,000 bariatric surgeries were performed in 2015. And studies show that more than 90% of people who have these surgeries are able to lose at least 50% of their weight—and keep it off long term.

“The surgery doesn’t seem to cause the same hormonal and metabolic changes we see with regular weight loss, so you’re less likely to regain weight,” explains Dr. Ways. “It’s also been shown to improve other obesity-related diseases, such as hypertension, sleep apnea, GERD and fatty liver disease.”

In fact, about 80% of people with type 2 diabetes who undergo bariatric surgery see complete remission of their condition. To further study this, Johnson & Johnson announced a partnership with the University of California San Diego in June to explore how bariatric surgery can improve conditions such as type 2 diabetes, fatty liver disease and chronic kidney disease (CKD).

There are other promising treatments for obesity on the horizon.

While there are drugs currently on the market designed to treat obesity, “most patients [taking them] only lose about 5% of their body weight,” Dr. List says.

That’s why Johnson & Johnson has been focused on developing new treatments that can more effectively target the disease.

According to a study presented last year at the American Diabetes Association’s annual meeting, one existing medication the company produces, when paired with the drug phentermine—an appetite suppressant—appears to almost double weight loss, compared to using phentermine alone.

The company has also entered into a licensing agreement to investigate a compound that appears to improve both blood sugar levels and body weight. It works by mimicking a hormone called oxyntomodulin, which, among other things, suppresses appetite.

The microbiome could be the next weight-loss frontier.

Scientists are also learning that what you eat also affects what you weigh—in more ways than you may think.

How the Microbiome Could Transform Your Skin in Surprising Ways

“We now think the bacteria that lives in your digestive tract—your gut microbiome—may impact your risk for obesity,” Dr. List explains.

If you weigh 200 pounds, you’ll see significant benefits if you just lose 10 pounds and keep it off. That's a lot more doable and less daunting for most people than losing 50.

A 2015 review published in the journal Nature, for example, found there were specific bacterial changes in the guts of obese individuals that caused changes in their levels of hunger hormones, which can lead to obesity.

More research needs to be done in this area, Dr. List says, but in the meantime, he notes you can help keep your gut microbiome in balance by eating a diet that’s high in fruits and veggies and low in sugars and processed foods.

The good news when it comes to obesity? Losing even just a little weight may go a long way.

In fact, people who shed just 5% of their body weight saw almost as significant a drop in blood pressure, triglyceride and blood sugar levels and liver fat as those who lost 10% or more, according to a Washington University study published last year in the journal Cell Metabolism.

“If you weigh 200 pounds, you’ll see significant benefits if you just lose 10 pounds and keep it off,” Dr. Aronne stresses. “That's a lot more doable and less daunting for most people than losing 50.” 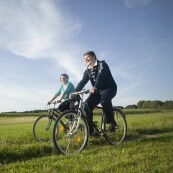