An Expert Explains the Latest Good—Yes, Good!—News About Lung Cancer

172
A new report from the American Cancer Society sheds light on declining death rates from cancer—especially lung cancer. We asked an expert on the disease to break down the data, and share what's to come in better detecting and preventing it.
By Jennifer Rainey MarquezFebruary 21, 2020
Today's Top Reads Close
I

n January, the American Cancer Society issued an announcement that gave cancer experts reason to cheer: According to the organization’s latest report, the U.S. cancer death rate fell more than 2% from 2016 to 2017—that's the largest single-year decline ever recorded. 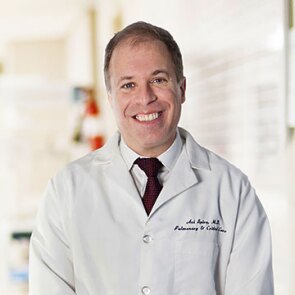 “Primarily what we’re seeing is a recent drop in deaths from lung cancer,” says Avrum Spira, M.D., Global Head of the Lung Cancer Initiative at Johnson & Johnson, which is devoted to developing potential solutions for preventing, intercepting and curing the disease. “It’s a testament to the country’s efforts in cancer prevention, and offers real reason to feel encouraged. Still, there’s a lot of work to be done, especially when it comes to detecting and treating lung cancer earlier.”

For National Cancer Prevention Month, we sat down with Dr. Spira to learn more about the new report—and how he and his team are hard at work to help reduce lung cancer death rates even further.

What does this new report have to say about progress with lung cancer prevention?

For lung cancer, the decreasing number of deaths is very much a public health victory. While there have been some important advances in finding lung cancer earlier and treating it better, the declining lung cancer incidence is driven by the fact that fewer people in this country are smoking.

Still, lung cancer remains the leading cancer killer in the U.S., with about 140,000 deaths annually. The five-year survival rate for lung cancer is only 19%, and it kills more people than the next three most common cancers—breast, prostate and colorectal—combined.

Why is it so hard to budge those survival rates?

Even today, most people with lung cancer are diagnosed at a late stage, where the cancer has spread widely throughout the body.

Screening for lung cancer with chest CT scans has become the standard of care in the U.S. for adults over 55 who have a history of heavy smoking. Two very large studies—the National Lung Screening Trial in the U.S. and the NELSON Trial in Europe—have shown that by screening these individuals you can find lung cancer at an earlier stage and help reduce mortality. However, adoption of CT screening has been limited so far.

The problem is that these scans tend to have very high false positive rates—most of the lesions or nodules that the CT scan picks up are not, in fact, lung cancer. This can represent a real challenge clinically, because we aren’t always sure which spots on the CT scan to biopsy. This can lead to many patients without lung cancer undergoing unnecessary invasive diagnostic procedures, and a delay in diagnosis for those who have lung cancer.

One of the takeaways from this data is the importance of public health measures around getting people to stop smoking, or even better, not start in the first place. I’d argue that’s the area where we’ve made the biggest strides.

At the LCI, we’re working on developing a number of biomarkers—that is, indicators of the severity or presence of disease—that could potentially tell you whether that spot on your lung is likely cancer or not, allowing us to have better approaches for identifying patients with pulmonary nodules who are at the highest risk of having lung cancer for a lung biopsy procedure. We're also working on possible solutions for better, less invasive ways to take a lung biopsy. 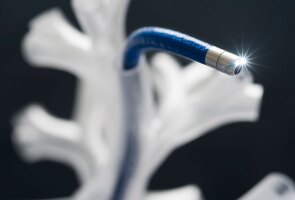 Today, a lung biopsy often requires either surgery or a needle biopsy through the chest wall, which both carry risks for significant complications. The LCI is working with Ethicon and Auris Health, part of the Johnson & Johnson Medical Devices Companies, on a robotic bronchoscopy platform called Monarch (shown at right) that allows clinicians to reach the lungs through airways, rather than going through the chest wall. This robotic endoscopic platform has the potential to overcome the traditional limitations of conventional bronchoscopy by significantly improving the reach for sampling small peripheral lung lesions from within the airway.

Ideally, the hope is that one day we could even use the platform to not just diagnose the presence of lung cancer or a pre-cancerous lesion within a nodule, but also treat the lesion locally during that same procedure—potentially using pharmaceutical assets in partnership with the Janssen Pharmaceutical Companies of Johnson & Johnson and ablation platforms in partnership with Ethicon/Neuwave—that could be similar to how a colonoscopy can find and treat pre-malignant polyps in the colon.

The LCI is also focused on developing new approaches to intercept the disease years before it occurs.

One of the main reasons that deaths from cardiovascular disease have dropped is that we don’t wait until people have a heart attack or a stroke to start treating them, but rather treat their risk factors years earlier. However, there’s currently no medication that we can give people, like a statin, that can help lower the risk of developing lung cancer, and we don't have a cholesterol-like test that can tell patients whether they’re at elevated risk for developing lung cancer.

So that’s another one of the ultimate objectives of the LCI—we are focused on developing tests or treatments that could potentially be used to intercept lung cancer years before it occurs. We need a test that will let us know if someone’s on their way, and then a treatment to prevent it.

Do you see cancer death rates declining even further over the next 5 to 10 years?

In the U.S., I think we will. One of the takeaways from this data is the importance of public health measures around getting people to stop smoking, or even better, not start in the first place. I’d argue that’s the area where we’ve made the biggest strides over the past 30–40 years.

Most smokers start lighting up in their teens and early 20s, but often don’t develop cancer until they’re in their 50s and 60s. So we’re just now reaping the benefits of decades of this public health work. It’s a long tail, so I think we’ll continue to see the number of lung cancer cases decline.

To help drive down smoking rates even more, the LCI is working together with Johnson & Johnson Consumer Health to improve the efficacy of smoking cessation.

For example, we’re working on a digital solution to help influence smokers’ behavior. It helps people begin thinking about quitting and what their plan might look like. Once they're ready, it supports them in navigating their journey more effectively. We’re very excited to explore these digital-behavioral techniques.

All this said, not smoking is not a guarantee that you won’t develop lung cancer. We’re seeing increasing numbers of nonsmokers get the disease, particularly in other parts of the world where you have a lot of air pollution. About 20% of lung cancer cases in the U.S. occur in nonsmokers—and we really don’t know how to prevent it.

We still need a better understanding of the disease, which is why we are so devoted to innovation to improve the prevention, interception and curing of lung cancer.