Evarrest®: The Little Patch That Can Help Surgeons in a Big Way

Share
It may look deceptively simple, but this newly FDA-approved tool can help stop patients from bleeding during surgery.
By Hallie LevineNovember 10, 2016
Today's Top Reads Close

For a surgeon, few scenarios can cause as much stress in the operating room as when a patient begins to bleed unpredictably.

Unfortunately, bleeding complications can happen more often than you'd expect: About half of patients who undergo surgery continue to bleed even after doctors try to stop it using traditional methods like sutures, cotton gauze or electrocautery.

The Evarrest® Fibrin Sealant Patch can help change that.

“It looks so ordinary—just like simple cotton gauze—but it’s not a simple product,” says Richard Kocharian, M.D., PhD., Franchise Medical Director for Biosurgery at Ethicon, Inc., who was involved in the development of the patch.

Research bears his words out: Clinical trials conducted globally have shown Evarrest can stop bleeding on the very first attempt for a wide range of surgical procedures. Most importantly, Dr. Kocharian adds, the patch’s components have a history of safe and effective use in clinical practice over many years.

For these reasons, Evarrest was just approved by the U.S. Food and Drug Administration (FDA) for a “general hemostasis indication”—in other words, for controlling bleeding in various tissue types or surgical procedures.

“This label couldn’t come at a better time, with more and more senior patients on anticoagulants or antiplatelet therapy, which can significantly increase the risk of bleeding complications during and after surgery,” Dr. Kocharian says. “Now surgeons have a product they can count on to help stop bleeding on their first attempt.”

What Makes This Patch So Special

The product itself has been around for several years—it first received FDA approval in 2012 as an “adjunctive hemostat” (for use when conventional surgical techniques prove ineffective or impractical for bleeding) during thoracic, abdominal and pelvic surgery. Then, in 2015, it received approval for use in adult liver surgery.

Pretty amazing for a small patch, right? It's all thanks to these three key features: 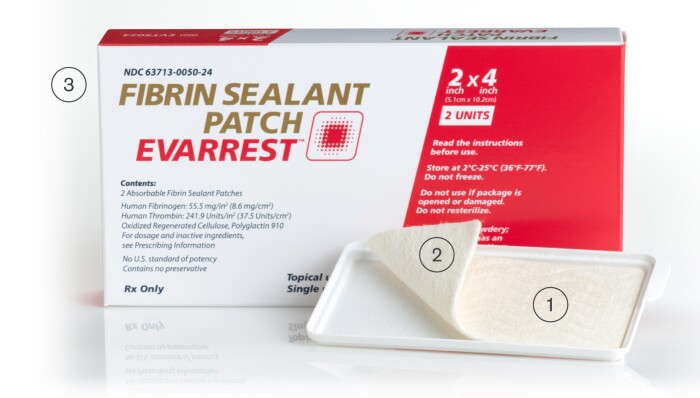 1. Evarrest is made of absorbable, oxidized, regenerated cellulose covered with thrombin and fibrinogen—sterile, bio-absorbable and well-known biological compounds that have been used in surgery for decades.

“This combination makes the patch effective in stopping active bleeding, regardless of how well patients are clotting on their own, and the components are easily absorbed by the body via the same pathway by which a blood clot is naturally absorbed,” explains Dr. Kocharian.

2. When the active side of the patch comes into contact with the surface of bleeding tissue, thrombin (a clotting enzyme) converts the fibrinogen into fibrin. The result is the formation of a stable blood clot that integrates with the patch’s matrix design and sticks to the injured tissue surface to help stop the bleeding.

3. Unlike other products that contain active biologic components to stop bleeding, Evarrest is ready to use immediately—there’s no preparation or moistening needed. A surgeon or nurse can simply open up the package, and apply the patch immediately.

“This is a great advantage in emergency bleeding situations, when every second counts,” Dr. Kocharian says.

And there's no need to remove it: The body will absorb the patch in about eight weeks.