Share
From "targeted therapies" to "precision immuno-oncology," the scientists at Janssen Oncology are looking at cancer treatment from all innovative angles. For National Cancer Prevention Month, they let us in on some of the work they're doing to help transform cancer care as we know it.
By Aviva PatzFebruary 12, 2017
Today's Top Reads Close
W

Peter Lebowitz, M.D., Ph.D.Global Head of Oncology, Janssen Research & Development, LLC, was an assistant professor of medicine at Georgetown University Medical Center in 2004, he began to wonder why chemotherapy—the prevailing method of treating cancer since the 1960s—continued to be the most commonly used therapy.

"[With chemotherapy], some tumors melt away, but with others, it’s a different story," says Dr. Lebowitz, who's now Global Head of Oncology at Janssen Research & Development, LLC, part of the Johnson & Johnson family of companies. 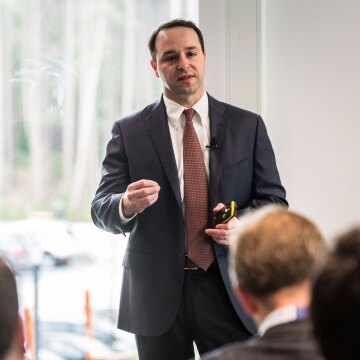 Peter Lebowitz speaking at a conference in Belgium last year

From his perspective as a trained oncologist and molecular biologist, with 15-plus years spent studying cancer, there had to be other approaches to eradicating a scourge as multifaceted as cancer.

"So I promised myself that I would dedicate my career to helping bring about those kinds of novel approaches," he says.

Today, nearly 400 scientists under Dr. Lebowitz's leadership at Janssen are helping him with that mission.

Since 2010, they've collectively brought five different cancer treatments to market—all for forms of the disease for which new treatment options were sorely needed. Along the way, Janssen has earned six "breakthrough therapy" designations for its cancer treatments from the U.S. Food and Drug Administration (FDA), meaning that the FDA worked with Janssen to expedite the development of those drugs.

Currently, Janssen Oncology has 14 Phase III clinical trials ongoing, which is usually the last round of testing necessary before a company can submit a new drug or use to regulatory authorities, such as the FDA, for approval.

In addition to developing treatment options for cancer patients with unmet needs, Dr. Lebowitz's teams are also focused on another lofty strategy: trying to find ways to detect cancer in its earliest stages and intervene—before it fully develops in the human body.

Lofty, yes. But not impossible.

We take a look at how Janssen oncology teams are not only thinking outside the box, but trying to reinvent the box to help treat, prevent and potentially even someday eradicate certain forms of one of the most devastating diseases of our time.

Perhaps the most difficult thing about trying to treat cancer is the fact that researchers aren't just facing a singular enemy. 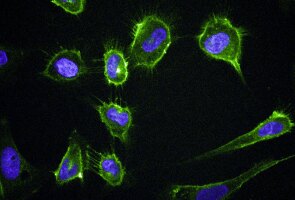 "Cancer is actually more than 100 different diseases, and within each disease, there are subtypes that make them unique," explains Scott White

That’s why the Janssen oncology division has chosen to focus its research on three disease areas: lung cancers, prostate cancers and hematologic malignancies, or cancers of the blood.

"We're looking for transformational drugs," Dr. Lebowitz explains, referring to treatments that can markedly change how the disease impacts the patient’s life. "If we can create a new drug that's only 10% better than what's already out there, we have not really transformed the treatment of the disease, or what the diagnosis means to the individual."

Take the work Janssen has done with prostate cancer. "Before 2004, prostate cancer was considered the graveyard of drug development," says Margaret Yu, M.D.

"In a lot of cases, the immune system is blind to the cancer and doesn't fight it. Our approach has been focused on biologics—antibody platforms that use the immune system to mount an aggressive response against the tumor."

But by 2011, that thinking had changed, when Janssen developed a compound that was shown to help keep some patients living longer after receiving chemotherapy.

The median survival rate for people on the treatment increased by months—"and for some patients, years," Dr. Yu says.

New Ways of Waging the War on Cancer

According to Peter De Porre, M.D.

This is why some Janssen scientists are setting their sights on so-called "targeted therapies" that are designed specifically to fight cancerous cells, instead of attacking all bodily cells.

Messages in our DNA could also hold the key to combating certain cancers. By using cutting-edge diagnostics to look for key genetic markers, researchers have the ability to uncover which types of patients are more likely to respond to different types of therapies.

For example, scientists have learned that a small number of cancers are driven by an abnormality in a cell receptor that controls important signaling related to the cell’s division, growth and other critical functions. 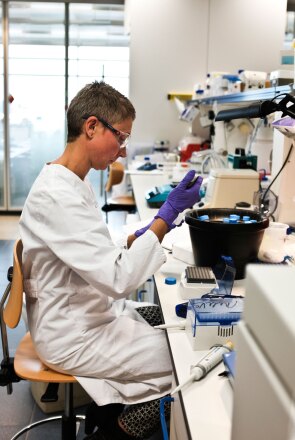 An oncology scientist at work in Belgium

"A mutation or molecular aberration in the FGFR receptor [the receptor on cells that binds to a protein called fibroblast growth factor] can cause an aggressive, rapidly growing tumor," Dr. De Porre explains. "Without the aberration, tumors don’t grow that fast or don’t even exist."

So his oncology teams are now focused on developing an FGFR inhibitor that could potentially work to block tumor growth in the small subgroups of patients with that aberration.

Another area of focus for Janssen scientists is in the emerging field of immuno-oncology. In fact, immuno-oncology is among the most active areas of R&D investment at Janssen, with 15 compounds currently in the pipeline.

"In a lot of cancers, the immune system is blind to the cancer and doesn't fight it," White explains. "Our approach has been focused on biologics—antibody platforms that use the immune system to mount an aggressive response against the tumor."

“We not only say we want to go for prevention, but we also do it. That goes to the heart of the passion that is with a lot of us—we see a future without disease, and we’re doing everything we can to make it happen.”

One noteworthy example of Janssen's immuno-oncology work is a biologic that makes a specific surface protein more recognizable on tumors, signaling to the body that they're a foreign object worthy of attack.

"The team behind it made history," Dr. Lebowitz says.

Janssen's also pursuing numerous approaches to "precision immuno-oncology," or designing personalized regimens tailored to a patient's specific tumor and immune profile to better treat their individual form of the disease.

"The drugs that have gotten approved to date focus on activating T cells—critical immune cells that can kill cancer," Dr. Lebowitz explains. "But we now want to find ways to also engage other potential means for the immune system to recognize the presence of a tumor."

Working Toward a Future Without Disease

Of course, the biggest goal of all for Janssen and its scientists isn’t just to figure out how to cure cancer—it’s to stop the disease from occurring in the first place.

"What we aspire to do is to begin to bring in the right regimen before patients even have the disease, and potentially cure some of them," Dr. Lebowitz says.

So his teams are now working with academic partners to look for early signs of abnormal proteins in the blood that could trigger an innocuous, healthy cell to become an aggressive myeloma. The ultimate hope, he says, is to institute screenings for such early signs of cancer the way women get pap smears to detect abnormal cells that could become cervical cancer.

Just 30 years ago, there was a lot less hope for patients with cancer.

Since then, thanks to advances in chemotherapy, radiation and other new therapies, some types of cancer are inching closer to becoming chronic but manageable conditions, much like diabetes or high blood pressure.

"The life expectancy for people diagnosed with some cancers has since gone from just a few years to longer," Dr. De Porre notes.

And that hopeful outcome is no accident.

"We not only say we want to go for prevention, but we also do it," Dr. De Porre says. "That goes to the heart of the enthusiasm and the power and the passion that is with a lot of us—we see a future without disease, and we’re doing everything we can to make it happen."