Battling the Baby Blues: Meet 3 Researchers Whose Innovative Work Is All About Boosting the Mental Health of Moms

Share
A staggering 1 in 7 women suffer from perinatal mood disorders, which can begin as early as pregnancy. We take a look at how these scientists are working to find ways to help halt depression in moms at the most critical juncture: before it starts.
By Abigail LibersMay 08, 2019
Today's Top Reads Close
W

elcoming a new baby can be one of the most joyous experiences in a person's life.

For many, the reality of new motherhood can paint a less rosy picture. Worldwide, 13% of women who've just given birth experience a mental disorder—most commonly postpartum depression, which can leave new moms with feelings of sadness, hopelessness and emptiness that can last for more than two weeks after delivery. What researchers hypothesize could be to blame: a complex interplay of physical and emotional factors, like fluctuating hormone levels and lack of access to adequate social support.

For some new moms, these symptoms can even start as late as 12 months postdelivery, and as early as pregnancy, with as many as 50% of women developing them before a baby is born. It's known as perinatal depression—and it's an illness that Johnson & Johnson is researching in order to help find ways to stave it off at the earliest stages.

“Our objective is to find women who are at high risk and intercept the disease by getting to them before the depression can manifest," explains Kevin Wildenhaus, Ph.D.

It's a lofty goal the company is uniquely qualified to pursue.

For over a century, Johnson & Johnson has been committed to improving the health of moms-to-be and their babies. It's also been a leader when it comes to mental health research, offering recent advancements in illnesses ranging from treatment-resistant depression to schizophrenia.

As we prepare to celebrate moms across the country this Mother's Day, we're taking a look at how scientists (some moms themselves) are hard at work helping drive innovation and progress in maternal mental health—which has the potential to improve the health of generations to come.

A High-Stakes Epidemic That Starts During Pregnancy

It's a surprising and sobering fact: Perinatal mood and anxiety disorders are considered to be the most common medical complication during and after pregnancy. In fact, The American College of Obstetricians and Gynecologists recently updated their perinatal depression screening guidelines to recommend that healthcare providers check patients at least once during the perinatal period for depression and anxiety symptoms. 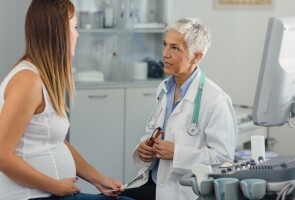 The federal government has also taken note: For the first time ever, the U.S. Preventive Services Task Force recommended in 2018 that healthcare providers help pregnant or postpartum women who are at an increased risk of perinatal depression seek counseling.

“One reason this is really important is because an increasing amount of research shows that being depressed during pregnancy has negative effects on the fetus,” Wildenhaus explains.

“By aiming to intercept the disease in mothers, it may be possible to intercept it in their offspring down the road. Having that two-for-one impact is what’s so exciting.

The reason? Depressed women have higher levels of the stress hormone cortisol, which gets transmitted to the baby during gestation. “Research shows that when the fetus gets high doses of cortisol in utero, the baby is more prone to increased risk of ADHD, anxiety disorders and depression later in life,” Wildenhaus says.

One study showed that babies whose moms were depressed during pregnancy, compared to children of mothers who weren’t depressed, were almost five times as likely to be diagnosed with depression themselves by the age of 16.

“By aiming to intercept the disease in mothers, it may be possible to intercept it in their offspring down the road,” Wildenhaus says. “Having that two-for-one impact is what’s so exciting.”

Targeting Perinatal Depression in its Infancy

Of course, the obvious question is: How can you treat perinatal depression before it even manifests?

The first step is learning how to predict which women are most at risk. That is at the heart of a forthcoming study Wildenhaus is working on with leading perinatal psychiatry researcher Samantha Meltzer-Brody, M.D., MPH, of The University of North Carolina at Chapel Hill. 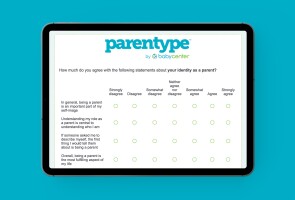 Over the course of two years, Wildenhaus and Meltzer-Brody’s teams followed 300 pregnant women during their prenatal clinic visits and gathered data regarding their stress and anxiety levels, as well as blood-based biomarkers that are captured as part of their routine prenatal care.

Why is this happening? is something that Janet Nikolovski, Ph.D.

They are hard at work exploring how to improve the overall well-being of moms, spurred on by one critical question: What happens psychologically to people as they transition to becoming parents?

To investigate the answer, in 2018, Nikolovski and her colleagues teamed up with BabyCenter®, an online resource for parents and parents-to-be, to launch Parentype—a digital quiz that helps new and expecting moms and dads measure their parental well-being.

One of the biggest risk factors we’ve seen for poor well-being is a discrepancy between expectations a woman has when pregnant versus how she feels after the baby has come.

“We wanted to know if we could give moms really pointed and time-bound interventions to prevent some of their struggles and help them bond better with their babies,” Nikolovski says.

Next up: The team is expanding upon the quiz by launching a separate website for parents and parents-to-be that will allow them to track their progress as parents over time, as well as compare their parenting scores to their partners and people all over the world.

It will be an opportunity for Nikolovski and Rotella to deploy some of the interventions they’ve been testing, such as an exercise where moms who may be struggling are prompted to write letters to their former selves to help them cope with and work through their emotions. Another intervention is designed to help moms reconcile their old and new identities by listing parts of their personality that attracted their partner to them—and then describing how those same features carry over into their parenting style. Users can then choose to share their work with other women on the site who may be able to relate.

The goal is to eventually have enough data so that Nikolovski and her team can make predictions about how people evolve as parents, and help them head off challenges before they arrive.

“For example, one of the biggest risk factors we’ve seen for poor well-being is a discrepancy between expectations a woman has when pregnant versus how she feels after the baby has come,” Rotella explains. “We’re excited for the possibility of being about to identify who’s more likely to have an expectation that’s unlikely to match up to the lived experience, and help intervene to get those expectations in line.”

On the Horizon: Accessible Treatments and Solutions

Of course, it's not always possible to catch depression before it starts, which is why the team is also working to innovate safe and effective treatments for at-risk moms. Mindfulness practices have been proven to help ease anxiety and depression

One such promising treatment: mindfulness-based cognitive therapy (MBCT), which incorporates practices like meditation and breathing techniques.

Wildenhaus and his team have collaborated with top researchers at the University of Colorado Boulder to look at whether MBCT could be administered to high-risk women via an app or website. “That way, we could reach a lot of women who may not have access to face-to-face behavioral therapy,” Wildenhaus says.

Rotella echoes the power of this type of therapy.

"Part of cognitive behavioral therapy is being able to change how you interpret and react to situations,” she explains. “You can’t change anybody else, but you can change how you respond. And if you can get better at it, you’ll be more resilient in the face of things that may cause anxiety or depression to flare up.”

"If we can make predictions about who is going to struggle and when, then we can intervene so that either you don’t have to go through certain challenges, or you at least have resources you can use when tension arises,” she says.

And that's a great start to paving the way for healthy moms—and their families. 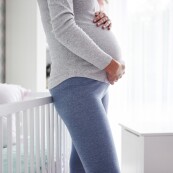