1154
Harnessing the immune system to target cancer is the goal of a groundbreaking area of oncology research called cell therapy. And Johnson & Johnson is hard at work in the cutting-edge field, aiming to deliver potential new treatment options to people around the world.
By Hallie LevineOctober 11, 2021
Today's Top Reads Close

Imagine if cancer could be eliminated.

For the past three decades, that very prospect has motivated teams at Johnson & Johnson to tirelessly innovate in oncology. From research into early detection and treatment of lung cancer to promising advances for people with an aggressive form of bladder cancer, the company has shown its unwavering commitment to giving patients more hope while working toward ending the disease.

One especially exciting area of innovation: cell therapy, a treatment that uses a patient’s own immune cells or the immune cells from another person to help battle diseases.

“We’re committed to fighting cancer through the development of innovative personalized treatments,” says John Knighton, Vice President, API Large Molecule Development at Janssen R&D, part of the Janssen Pharmaceutical Companies of Johnson & Johnson. “By harnessing the power of patients’ immune systems, cell therapy is one of a number of cutting-edge therapies we’re investigating in an effort to create a cancer-free world.”

For National Cancer Prevention Month, we take a deeper look into the science of cell therapy and how researchers are studying it, plus what Johnson & Johnson is doing to progress not just cancer treatments, but the future of therapies for other devastating diseases as well. 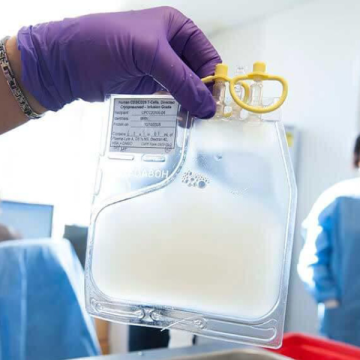 This treatment works by using a patient’s own immune cells or the immune cells from another person to target cancer and other diseases, says Tamas Oravecz, Ph.D., Vice President, Cell Therapy Platform and Discovery at Janssen R&D.

Unlike other therapies, “cell therapy has the potential to be a one-time, singular treatment that provides benefits throughout a patient’s entire lifetime,” he explains. That's because “cell therapy provides the body with 'immunological memory,' which means that a person’s immune system stores information about a certain stimulus, like a cancer cell, so it can destroy it when encountered again.”

Large numbers of these CAR-T cells are grown in the laboratory and are given to the patient by infusion a few weeks after the process has begun.

“The goal," explains Oravecz, "is to cure cancer with the patient’s own cells.”

Before these types of treatments, the majority of patients with multiple myeloma had little hope for long treatment-free intervals. Now that may become a real possibility.

How do researchers in the lab know it's working? The treatment hinges on the effectiveness of the altered T cells in killing cancer cells. To study this while developing CAR-T therapies, researchers use an imaging instrument that allows them to actually see the T cells destroying cancer cells in real time, according to Oravecz. A similar laboratory device has nanosensors inside it that can detect cancer cells in blood, which helps it gauge T cells' progress. The lab uses yet another instrument to measure cytokines, which are inflammatory substances released from T cells when they’re activated.

“I Have a Vision for Helping Advance Healthcare”: Meet 6 Leaders Working on Inspiring Innovations in 2020

“This way, we have a number of ways to make sure that the therapies we’re using are actually working,” he explains.

And the need for effective options for patients is urgent: With multiple myeloma, a type of blood cancer, relapsing is the rule, as current therapies can shrink tumors but not eradicate them. In 2021, it is estimated that more than 34,000 people will be diagnosed and close to 12,500 will die from the disease in the U.S.

“Before these types of treatments, the majority of patients with multiple myeloma had little hope for long treatment-free intervals," says Michael Ports, Ph.D., Senior Director, Cell Therapy Research at Janssen R&D. "Now that may become a real possibility.”

Johnson & Johnson has long been a pioneer in cancer research, innovating solutions for more than 30 years. And the company has been researching CAR-T cell in multiple myeloma therapy since 2017, when Janssen partnered with Legend Biotech to jointly develop and commercialize a CAR-T treatment, based on Legend Biotech's novel cell therapy.

In January 2020, Janssen launched its Cell Therapy Center, a 12,000 square-foot state-of-the-art facility in Pennsylvania, to further these goals of engaging in CAR-T cell research and development.

“The beauty of the Center is that it allows many researchers to work together seamlessly as one unit,” says Knighton. “This is critical when there’s such innovative science going on, since there are so many unknowns and it takes many minds to figure out how all the pieces fit together.”

These collaborative efforts are going well: Janssen submitted its Biologics License Application (BLA) to the U.S. Food and Drug Administration (FDA) for its investigational CAR-T therapy for multiple myeloma—an important step in moving toward a drug's approval. Currently, the investigational therapy has been submitted for health authority review and approval in several countries and is being evaluated in a comprehensive global clinical development program.

“The process of CAR-T is complex and time-intensive—a patient has to have cells removed from their body, sent to our manufacturing facility to be genetically engineered, then sent back a month later,” explains Ports. “Our focus is to make sure patients who are candidates for therapy get access to treatment when needed.”

Looking Toward the Future 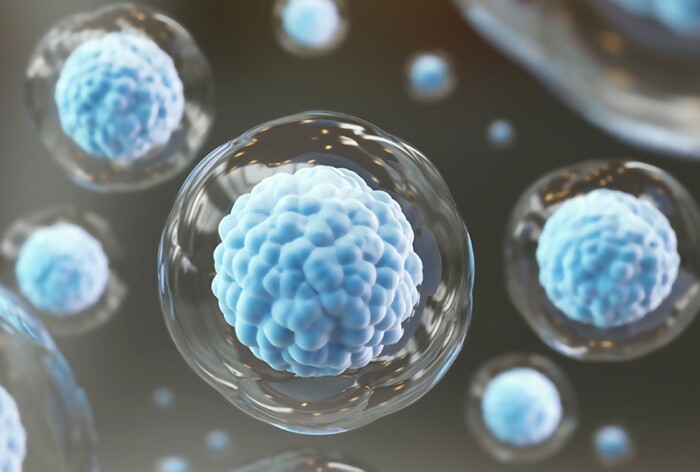 A 3D-rendering of cell therapy

Another area that the company is focusing its energy on is CAR-T therapies that rely on healthy donor cells. “This approach is faster and less costly to manufacture than CAR-T using a patient's own cells," explains Oravecz. "This aligns with our goal to make cell therapies as accessible and affordable to patients as possible.”

iPSCs can theoretically be developed into any type of human cell needed.

“The hope is that eventually we will be able to make iPSCs using cells from healthy donors, genetically modify them and then administer them into patients with different types of solid and liquid tumors,” adds Mukherjea. “Our end goal is to be able to provide this type of therapy to patients quickly and efficiently.”

Cellular therapy is the therapy of the future. That’s why Janssen has made a commitment to be on the front lines when it comes to research and production. It's our mission to improve the lives of patients around the globe.

CAR-T treatments are primarily being used and studied for liquid tumors, such as in blood cancers like multiple myeloma, leukemia and lymphoma, because solid tumors "have traditionally been more challenging for CAR-T to target, as it’s difficult for the T cells to migrate to tumor sites and physically penetrate the solid mass,” says Knighton.

But Janssen is exploring a growing pipeline of next-generation approaches that could potentially improve the effectiveness in solid tumors, too, thanks to sophisticated gene-editing technologies and a better understanding of T cell-based therapy.

One such project that Janssen scientists are investigating is a CAR-T treatment that directly targets a substance that is thought to play a role in driving prostate cancer’s growth. Clinical trials are anticipated to begin later this year.

“If it pans out, this new project could potentially prove to be life-saving for patients with prostate cancer, which, in its later stages, can be quite aggressive and deadly,” says Knighton. And if this CAR-T treatment is successful, he adds, it could pave the way for research into other solid-tumor cancers.

Eventually, these may even be used to treat other diseases such as immune-mediated or neurological diseases. “The idea is that we will be able to take these cells and make them into any cell type or target needed,” explains Knighton.

From Doctor to Researcher: Meet a Woman Who's Spent Much of Her Career Fighting Prostate Cancer

The ultimate goal? That many seemingly incurable or chronic diseases may eventually be cured with just one treatment. “Cellular therapy is the therapy of the future,” stresses Knighton. “That’s why Janssen has made a commitment to be on the front lines when it comes to research and production. It's our mission to improve the lives of patients around the globe.” 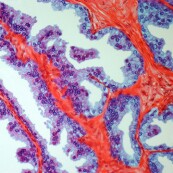