779
More than 200 million people worldwide are living with an autoantibody disease, which occurs when the body attacks its own cells, tissues and proteins.
By Kimberly GoadNovember 03, 2022
Today's Top Reads Close

Antibodies are proteins that guard against substances—such as bacteria, fungi, viruses and toxins—that enter your body like foreign invaders. Antibodies protect you by attaching to those invaders (also known as antigens) and triggering your body's natural immune response to destroy them.

You can think of autoantibodies as misguided, or pathogenic, antibodies. Instead of reacting to the antigen, they respond to your body’s own proteins, leading—in some cases—to an abnormal immune response that attacks the cells, tissues and organs of your body and contributes to the development of autoantibody diseases.

"Autoantibody diseases represent a significant area of unmet patient need," says Abouzahr. "There are 240 million people worldwide, approximately 3% of the population, who suffer from autoantibody diseases, many without safe and effective treatment options."

That's why Johnson & Johnson is working on immunological advances to help address the need. 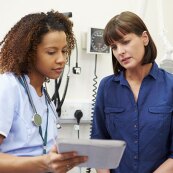