Share
The Chairman and CEO has now appeared on the Glassdoor list for five years running—all thanks to his employees.
By Johnson & JohnsonJune 20, 2018
Today's Top Reads Close

How many people can say they love their boss? At Johnson & Johnson, a whole lot of employees can—and do.

For the fifth year in a row, Alex Gorsky, Chairman of the Board and Chief Executive Officer of Johnson & Johnson, has been named to Glassdoor's Employees' Choice Awards list of Top CEOs.

Glassdoor, one of the world’s largest jobs and recruiting sites, compiles its annual list of best CEOs throughout North America and parts of Europe based solely on employee reviews submitted through its platform—and 95% of staffers who reviewed Johnson & Johnson for the 2018 rankings said they approved of Gorsky’s leadership.

To help put that into perspective, 770,000 companies were reviewed, and the average CEO approval rating came in at 69%.

As the seventh Chairman and CEO since the company went public in 1944, Gorsky’s leadership has personified the values of Johnson & Johnson’s Credo—the company's guiding mission statement, which prioritizes the needs of patients and employees alike—and has helped Johnson & Johnson solidify its position as the largest and most broadly based healthcare company in the world.

And this isn't the only accolade the company has recently garnered under Gorsky's direction: Johnson & Johnson also took the #1 spot on the 2018 DiversityInc Top 50 Companies for Diversity list, and was named a 2018 Fortune World's Most Admired Company.

Congratulations to Gorsky on the recognition of his exceptional leadership. 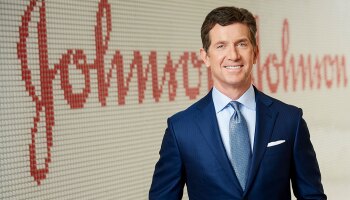