Share
The company has secured a top ranking on the biennial report—which grades companies on their efforts to make medicine more accessible to those in low- and middle-income countries—for the fourth consecutive time.
By Johnson & JohnsonNovember 20, 2018
Today's Top Reads Close

One billion. That's how many lives Johnson & Johnson is committed to impacting through its Health for Humanity 2020 Goals, which include a pledge to deliver innovative healthcare access to some of the world's most underserved communities and cutting-edge training programs for frontline healthcare workers.

And thanks to such efforts as the company's groundbreaking work researching an HIV vaccine and improving access to mental healthcare in sub-Saharan Africa, the company is working to achieve that goal.

It's these types of forward-thinking initiatives that helped Johnson & Johnson once again land a top spot on the latest Access to Medicine Index, which ranks the 20 largest research-based pharmaceutical companies in the world on their efforts to make medicines, vaccines and diagnostics more accessible in low- and middle-income countries.

“Johnson & Johnson strives to ensure good health is within reach of everyone, everywhere," says Jaak Peeters

So what does that progress look like in action?

Janssen, part of the Johnson & Johnson family of companies, broke new ground last November when it initiated the first-ever efficacy study for a mosaic-based vaccine, which contains immunogens created using genes from different viral subtypes responsible for HIV infections worldwide. The goal: hopefully find a way to prevent infections with a universal prevention tool—and ultimately help make the virus a thing of the past.

Together with a wide range of global partners, Janssen is conducting the study among 2,600 young women in sub-Saharan Africa, where the rate of new HIV infections is disproportionately high. Results are expected in 2021.

Johnson & Johnson has a similar goal in mind for multidrug-resistant tuberculosis (MDR-TB), a deadly form of the disease that doesn’t typically respond to traditional TB treatments and claims the lives of nearly 250,000 people each year.

In September, the company announced a 10-year initiative in support of the United Nations Sustainable Development Goal target of halting the TB pandemic by 2030.

As part of the initiative, Johnson & Johnson will work with partners to help improve detection of TB via targeted training of healthcare professionals in countries like China and India; broaden access to the company’s novel medicine for MDR-TB in more than 130 low- and middle-income countries; and work to accelerate research and development to discover the next generation of TB treatments.

Johnson & Johnson's Global Public Health unit is a model in the industry on access planning and results for several therapeutic areas, and it's constantly challenging itself to do more.

Mental healthcare is a critical issue around the globe. According to the World Health Organization, 300 million people worldwide are affected by depression, 60 million are affected by bipolar disorder and 23 million by schizophrenia.

In developing countries, the situation is particularly dire—76% to 85% of people in low- and middle-income countries receive no treatment for mental health issues.

But Johnson & Johnson is working to help change that.

For example, in August, the company announced a partnership with the Government of Rwanda to help address a shortage of mental healthcare professionals facing the country—the population outnumbers these providers by about 100,000 to one.

As part of the alliance, Johnson & Johnson will work with Partners In Health to help bring mental healthcare services to more Rwandan communities. The company will also collaborate with the Centre for Global Mental Health—in conjunction with the London School of Hygiene & Tropical Medicine and King’s College London—to train a new generation of mental healthcare professionals on the front lines of care in sub-Saharan Africa.

It's this type of long-term thinking that connects Johnson & Johnson to the tenets of the Access to Medicine Foundation, says Jayasree Iyer, executive director of the organization.

"Johnson & Johnson has consistently been a leader in the last four Access to Medicine Indices, bringing forward valuable treatments in such areas as TB and recently addressing mental health in low- and middle-income countries," Iyer says. "Its Global Public Health unit is a model in the industry on access planning and results for several therapeutic areas—and it's constantly challenging itself to do more. As a company with a strong R&D pipeline and a global network capable of further addressing the needs of those in the most challenging countries, we encourage Johnson & Johnson to take even greater action.” 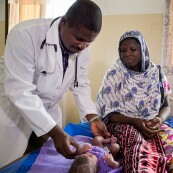