Jennifer Taubert,Company Group Chairman, Pharmaceuticals, The Americas—both of whom made the 2016 list.

Each year since 1998, Fortune has highlighted 50 women who are leading in their industries—and transforming their businesses along the way.

Peterson, who has appeared on the prestigious list five times and secured the #22 ranking this year, recently expanded her role at Johnson & Johnson to include oversight of the company's hospital medical devices business, in addition to her existing responsibilities overseeing consumer and consumer medical devices, global design, global services, health technology, health & wellness, information technology and supply chain.

The secret to her success? In a word, "optimism."

Since Johnson & Johnson was founded, women have been at the center of the story. More than half of the initial 14 employees were female, and today we have a vibrant, diverse group of leaders across our enterprise.

"It’s not in my DNA to say we can’t, we don’t, we’ve never," Peterson says. "To be bold and make a difference, we need to experiment, test and learn, and do things differently. I think the most important lesson I’ve learned over the course of my career is the importance of intellectual curiosity, agility of learning, and relying on other people and figuring out how to get the best out of them."

5 Questions for a Fortune Most Powerful Woman

Since debuting on last year's list, Taubert—who oversees innovation-based growth from Canada to South America for the company's pharmaceutical division—spearheaded the release of the company's 2016 U.S. Transparency Report, which sought to address questions about drug pricing and other company practices. She has also been named by the National Association for Female Executives (NAFE) as a 2017 NAFE Woman of Excellence in honor of her career success and her efforts to boost the progress of women and girls.

To Taubert, who nabbed the #43 ranking this year, it makes sense that more than one company leader is being feted by Fortune.

"Since Johnson & Johnson was founded, women have been at the center of the story," she points out. "More than half of the initial 14 employees were female, and today we have a vibrant, diverse group of leaders across our enterprise. Our representation on the list is an extraordinary hallmark in our continued efforts to ensure that Johnson & Johnson embodies diversity and inclusion in all that we do." 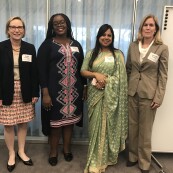