A Day in Modern Industry: The Johnson & Johnson Program That Gave High School Kids a Peek Into the Working World

Before there was Take Our Daughters and Sons to Work Day, this trailblazing program gave thousands of students the chance to shadow people across the company.
By Emma StevenApril 25, 2018
Share
Share
Today's Top Reads Close

Deciding what you want to be when you grow up can be a tough decision when you're in high school. How did Johnson & Johnson's "A Day in Modern Industry" program help expose kids to different careers?

Margaret Gurowitz,Chief Historian, Johnson & Johnson, Chief Historian: The company launched the teen-focused program in 1947, with the idea to invite local high school students to spend a day at Johnson & Johnson so they could learn about different careers available in business and the connection between those careers and their education. It was a new concept then—and decades ahead of its time.

The program was the brainchild of a Johnson & Johnson employee named Vincent Utz, a World War II veteran who joined the company in 1945 as Supervisor of Employee Activities. Utz was well-known for embodying the values of Johnson & Johnson’s Credo, the company's guiding mission statement, which includes a tenet on its responsibility to the local community. 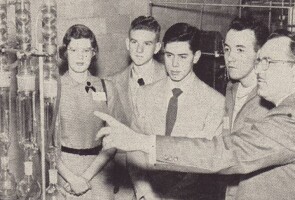 Each spring, starting in May 1947, between 200 and 300 teens came to Johnson & Johnson from schools near New Brunswick, New Jersey, where the company was—and still is—headquartered. The day began with a group briefing in which the students got an overview of the company and its different divisions; they then split into groups and shadowed employees working in careers they might want to pursue.

Johnson & Johnson staffers from all over the company were involved, including scientists, lawyers, accountants and those working in the manufacturing and shipping departments. One lucky student even got to shadow then-CEO General Robert Wood Johnson for the day, experiencing firsthand what it takes to run a company.

"A Day in Modern Industry" was such a success that it was covered by hundreds of news outlets, including The New York Times, Forbes Magazine, WCBS and ABC. As a result, other companies soon wanted to try the program—and Johnson & Johnson even published a manual for other businesses to follow.

Although the program ended at Johnson & Johnson in the 1950s, Utz’s concept of giving young people the chance to try out a career for a day lives on at the company.

In addition to celebrating Take Our Daughters and Sons to Work Day each April, we have a program within the company called Bridge to Employment. It helps young people navigate the gap between high school and employment in the healthcare field by providing them with career coaching and job shadowing opportunities at Johnson & Johnson locales around the world.