Share
As celebs and style stars file into the front row at Spring Studios for New York Fashion Week, Johnson & Johnson looks back at its iconic series of high-fashion Modess ads, which featured some of the most coveted models and designers of the couture world.
By Jessica HendersonSeptember 05, 2018
Today's Top Reads Close

Pop quiz: What product from the mid-20th century brought together the talents of famed photographers Cecil Beaton, Ruzzie Green and Valentino Sarra; cutting-edge couturiers Charles James and Christian Dior; and such legendary models as Dorian Leigh and Suzy Parker?

Surprisingly, the answer is sanitary napkins.

Starting in the 1940s, Johnson & Johnson ran one of the most fashionable marketing campaigns in the company’s 130-plus-year history for its iconic Modess sanitary napkins.

So how is it that a feminine care product became aligned with the haute couture world, anyway?

The Makings of a Fashion-Forward Marketing Campaign


Then-CEO General Robert Wood Johnson came up with the idea while brainstorming ways to boost sales for Modess. His thinking: pair striking photographs of models wearing gorgeous gowns in ornate settings, with a tagline that was as innovative as it was evocative—"Modess … because."

And unlike other campaigns of the era, the Modess ads let consumers supply their own unique reasons for buying the product, such as "because ... I don't want anything to stop me from going out to a party" or "because ... I want to look and feel glamorous."

"These two words helped spare the reader of any self-consciousness around the topic of feminine hygiene, providing dignity around what was not an easily discussed subject in society at that time," says Margaret Gurowitz

Margaret Gurowitz,Chief Historian, Johnson & Johnson, Johnson & Johnson's in-house historian. "In this way, the ads were as aspirational as they were chic," she adds. "They spoke to women's strength, confidence and self-expression."

To bring the campaign to life, Johnson & Johnson commissioned the likes of Leigh and Parker to don one-of-a-kind dresses by Dior, James and other designers. The company then tapped top cameramen of the day—including Beaton, Green and Sarra—to photograph the models in striking locations, from Park Avenue mansions in New York City to palaces and museums across Europe.

The result? Sales soared, and the campaign ran well into the 1970s.

As September's big fashion week kicks off in New York City, we decided to cull some of our favorite Modess ads from the company's archives and pair them with how we imagine a fashionista today might complete that "because ..." statement. 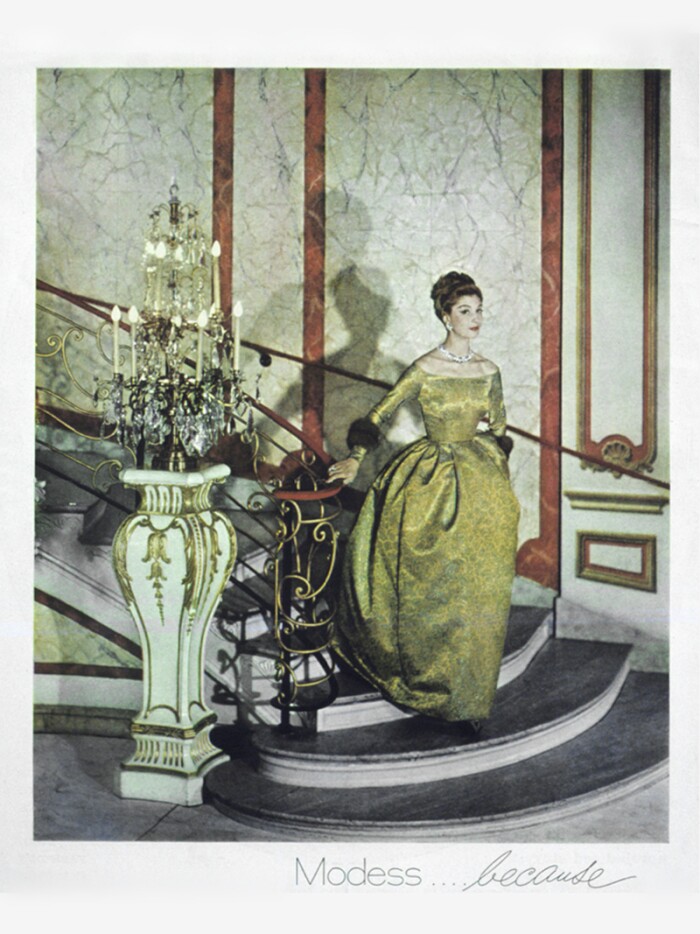 ... a dress fashioned from brocade and fur cuffs is pure #glam. 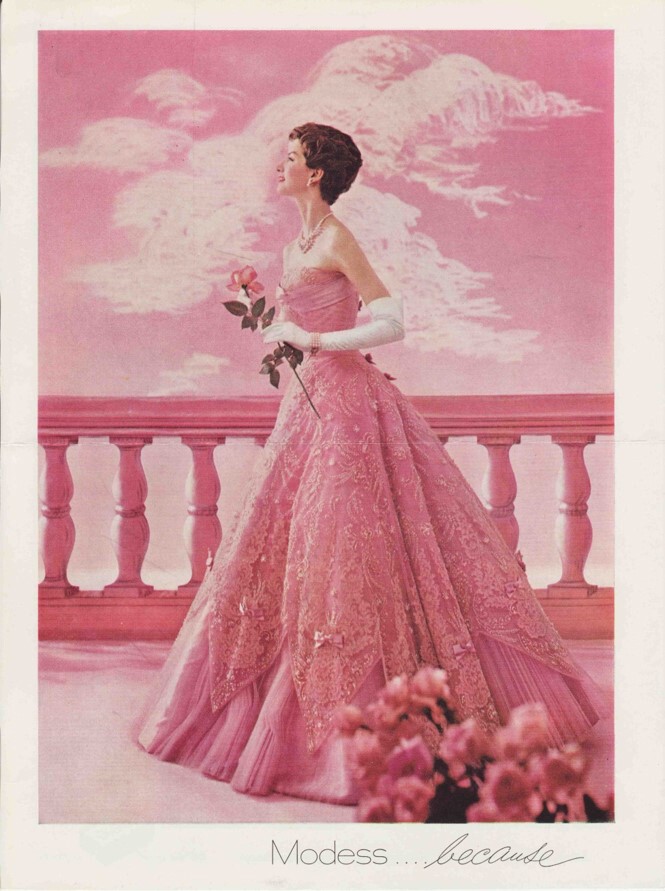 ... this pink confection of finely pleated tulle and beaded overlay is great #styleinspo for my next black-tie affair. 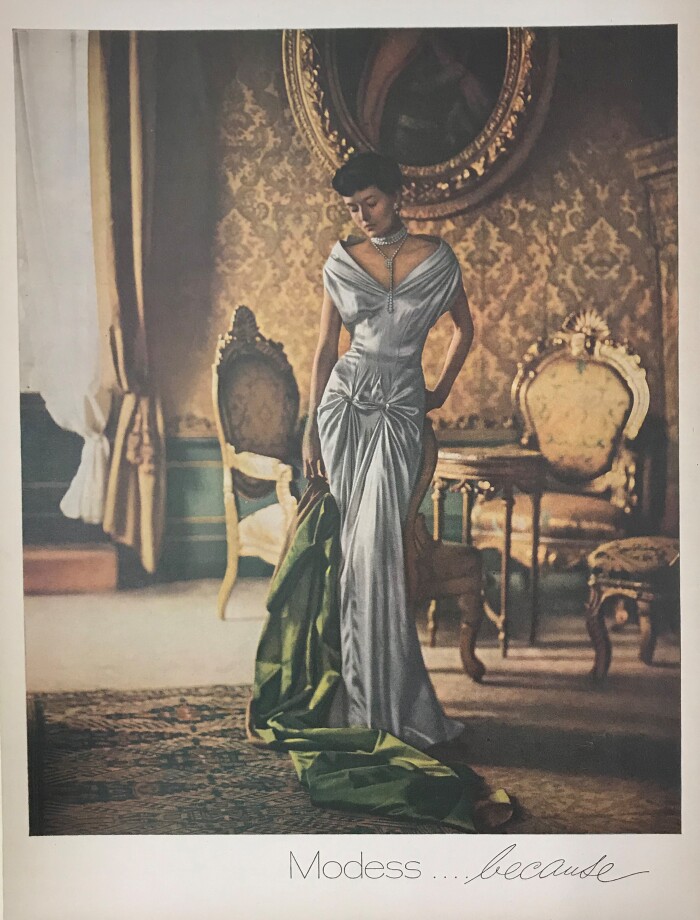 ... this fits-like-a-glove dress, cascading with ripples of bias-cut silk, is tailor-made for a holiday party. Paired with a diamond-studded lariat necklace, this look is sheer style #goals. 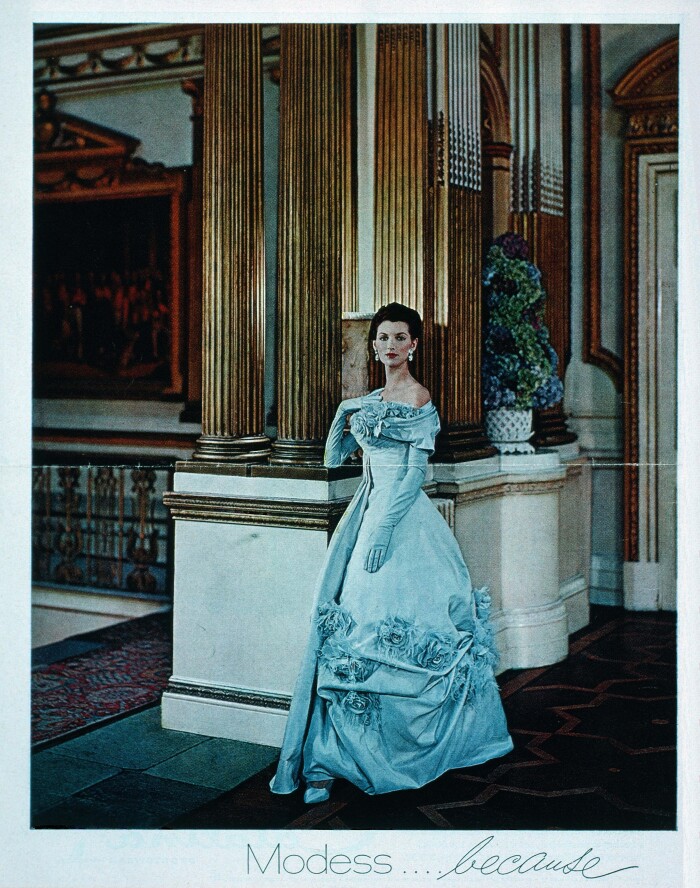 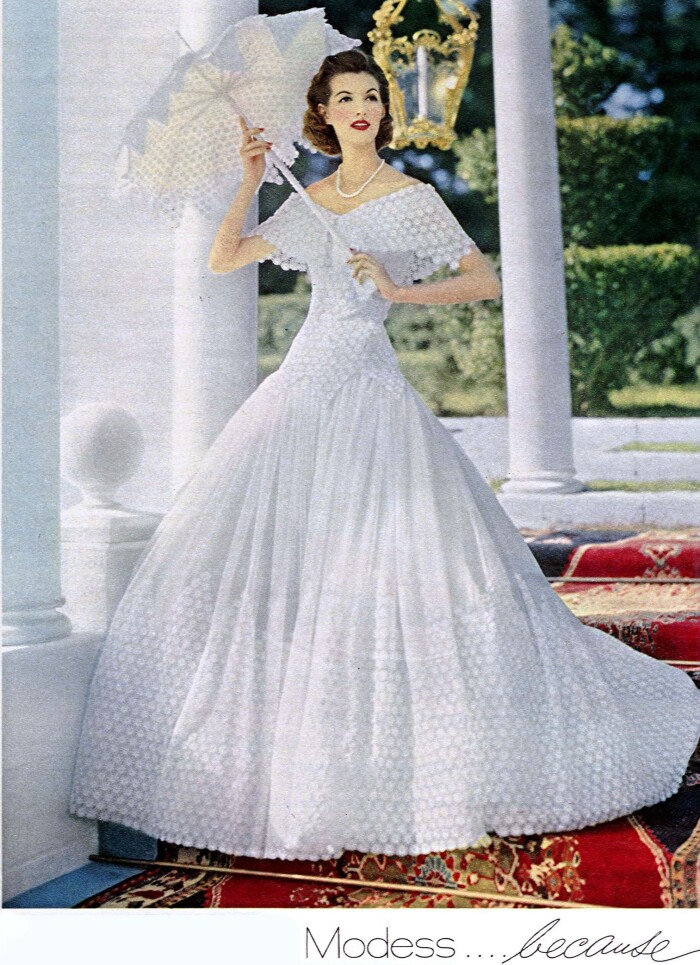 ... this Southern-belle look, complete with a matching parasol, is the perfect pin for my #KentuckyDerby Pinterest board. 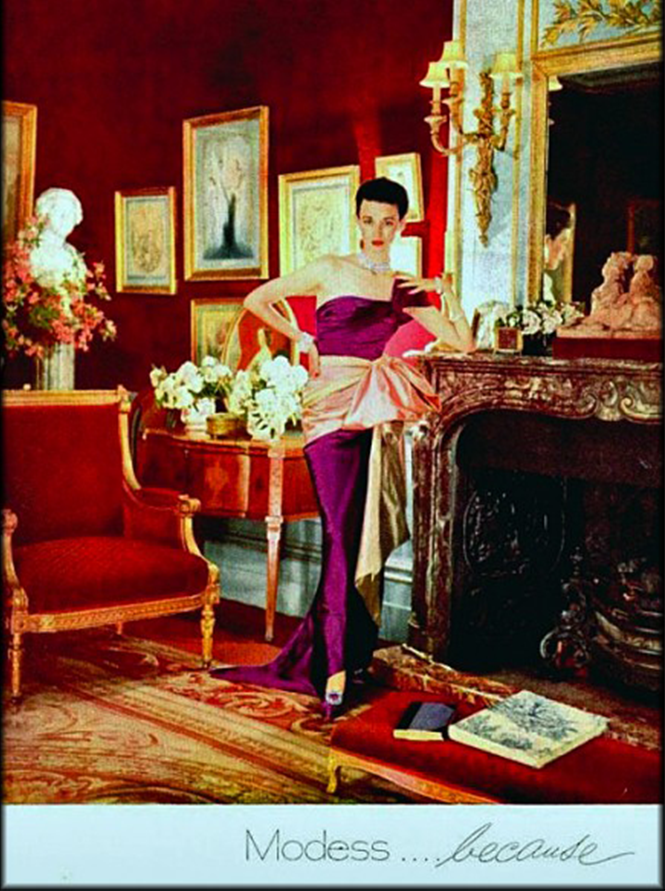 ... rocking a one-shoulder gown with a statement sash and minitrain, while lounging in a rococo room, is the epitome of #instafashion.