The 1888 Johnson & Johnson Manual That Changed Surgery for the Better

Share
In honor of the World Health Organization’s Save Lives: Clean Your Hands campaign, we look at how the company helped usher in the concept of sterile surgery at a time when physicians weren't even in the habit of scrubbing in.
By Kaitlin AhernMay 03, 2018
Today's Top Reads Close

Imagine you're at the hospital for a surgical procedure and the physician shows up wearing a dirty coat. Worse yet: He doesn’t take the time to wash his hands.

You’d probably be more than just a little worried, right?

Believe it or not, this was a common scenario little more than a century ago—until 1888, when Johnson & Johnson helped introduce the concept of sterile surgery by publishing a first-of-its-kind educational manual, Modern Methods of Antiseptic Wound Treatment, which explained how to prevent the spread of infection-causing microorganisms during surgery.

Germs? What Germs? A Look at the Medical Landscape in 1888


Although it may seem like common sense today, using sterile surgical supplies and instruments during operations to help prevent potentially life-threatening complications was an entirely new concept in the late 1800s—and there were many critics.
Share expand 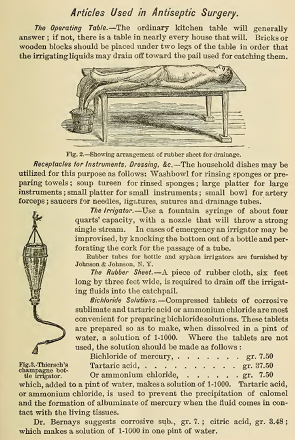 “Some people found it hard to believe that invisible germs were causing the sky-high rates of postsurgical infections during that time,” explains Margaret Gurowitz

Realizing there was a public health need, company founder Robert Wood Johnson and his brothers—who pioneered such mass-produced modern surgical materials as sterilized sutures and aseptic gauze—decided to publish a guidebook for those surgeons.

They enlisted the help of a scientist named Fred Kilmer, who owned a pharmacy near Johnson & Johnson’s headquarters in New Brunswick, New Jersey. Kilmer—who would later become the company’s scientific director—in turn asked several leading practitioners of the day to contribute to the manual. In addition to featuring step-by-step instructions for how to perform antiseptic surgery, Modern Methods of Antiseptic Wound Treatment also included advice for sterilizing common household objects, such as a kitchen table (shown above), since many doctors didn't have access to hospital operating rooms.

The book also urged physicians to trade out their never-washed black frock coats—traditional surgeon’s garb at the time—for clean white jackets (sound familiar?), and to wash their hands thoroughly before beginning a procedure.

The combination of the manual and the company’s ready-to-use sterile products put modern surgical practices within the reach of most doctors and hospitals for the first time.

Spreading the Word About Sterile Surgery


Within a matter of months, Johnson & Johnson had distributed 85,000 copies of the manual—free of charge—to doctors, surgeons and retail pharmacists across the United States. And by 1891, the manual had been translated into both Spanish and French. Ultimately, 4.5 million copies were circulated worldwide.

“The booklet became one of the leading treatises on how to do antiseptic surgery,” Gurowitz says. “The combination of the manual and the company’s ready-to-use sterile products put modern surgical practices within the reach of most doctors and hospitals for the first time.”

And that tradition continues today with such free digital manuals as the Johnson & Johnson Wound Care Resource™ App, which outlines how to properly care for wounds—using sterile practices, of course.

Learn more about the World Health Organization’s Save Lives: Clean Your Hands campaign, which is a global call to action for health workers to help prevent sepsis.