Zonweiss: The Johnson & Johnson Invention From 1887 That Inspired People to Brush Their Teeth

Share
For National Dental Hygiene Month, we're stepping back in time to the late 1800s, when less than 10% of the population paid attention to good oral hygiene—that is, until this product hit the market. Hint: It was squeezable.
By Ayn-Monique KlahreOctober 18, 2018
Today's Top Reads Close

Toothpaste. Dental floss. Mouthwash. Electric toothbrushes. These days, there are plenty of products on the market that can help you take care of your pearly whites, but at the turn of the 20th century, oral hygiene was practically nonexistent.

So why the reticence? Back then, brushing was a messy affair. “It entailed dunking your damp toothbrush into a communal jar of tooth powder—a practice that encouraged the spread of germs among household members,” Gurowitz explains. “Plus, many tooth powders were very abrasive and could damage teeth with prolonged use.”

But that was all about to change, thanks to an innovative product from Johnson & Johnson called Zonweiss.

The Enduring Impact of a Pioneering Paste

By 1887, Johnson & Johnson had already made a name for itself as a healthcare innovator due to its work mass-producing such sterile surgical materials as sutures and gauze.

But it also recognized the need for better (and more sanitary) oral care products, which is how Zonweiss (German for “white teeth”) was born. The cream was designed to be gentler on teeth than more common powders, and it was sold with a small spoon that was used to more hygienically transfer the cream from the jar to a toothbrush. 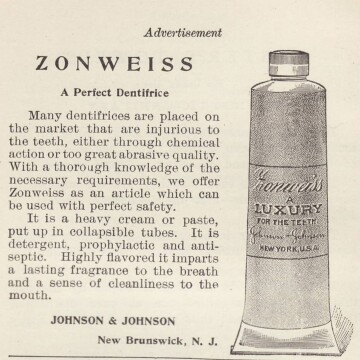 Two years later, the company identified an even more hygienic and easy-to-use solution: the collapsible metal tube. “The tubes were a then-new innovation being used by artists to house paints, and Johnson & Johnson was one of the first companies to adopt the technology for toothpaste,” Gurowitz says. “This was the original inspiration for the plastic tubes we’re all familiar with today.”

Despite these forward-thinking products, Gurowitz says it was still a struggle at first to get people on board with the idea of using the product regularly due to the lack of public knowledge about good oral hygiene.

“So Johnson & Johnson made a point to teach people to take better care of their teeth by giving out free information, including pamphlets distributed in pharmacies, where most people shopped for personal care products,” she says. “This was one of many educational campaigns the company undertook in that era—and the lasting effects can still be seen today.”

Zonweiss was discontinued in the 1920s, but its legacy lives on in the company's line of innovative Listerine® products, as well as its dental floss, which Johnson & Johnson first mass-produced 120 years ago.