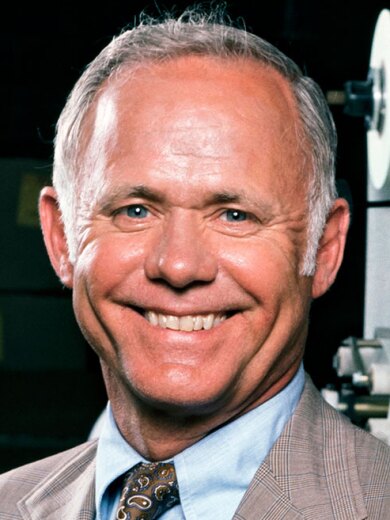 His passion for the company's ethics-driven business philosophy earned him a spot on Fortune Magazine's 10 Greatest CEOs of All Time. See how his legacy lives on today.

When you're a company that's been around since 1886, it's no surprise there are more than a few standout staffers from the past. So for our new series, Historic J&J Heroes, we're recognizing the remarkable feats of everyday employees who have worked right here at Johnson & Johnson.

For our first story in the series, we're spotlighting James Burke, a leader who made it his mission to uphold the iconic company Credo, written 74 years ago this month.

His Johnson & Johnson career path …
James Burke was the company's Chairman and CEO from 1976 to 1989. He joined Johnson & Johnson in 1953 as a Product Director for consumer wound care products and rose through the ranks to become President of the corporation in 1973—a position he held until Richard Sellars stepped down as Chairman and CEO in 1976.

Why we think he's worthy of being called a hero …
If you aren't familiar with the Johnson & Johnson Credo, it's a document that outlines the company's commitment to the needs and well-being of the people it serves. 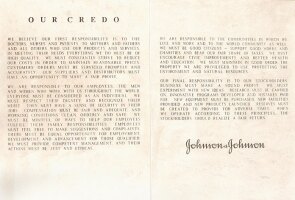 Our Credo, as it read when James Burke was Chairman and CEO

"Burke was one of the Credo's biggest champions and introduced Credo Challenge meetings that were dedicated to making the business philosophy relevant in current times," says Margaret Gurowitz

At one Credo Challenge meeting, he even suggested that managers rip the document off their office walls if they refused to acknowledge its importance—that's how seriously he took the mission of putting its tenets into practice.

During his tenure, Burke accumulated several accolades for his leadership, including being named one of Fortune Magazine's 10 Greatest CEOs of All Time in 2003. President Bill Clinton also awarded Burke with a Presidential Medal of Freedom—the country's highest civilian honor—in 2000 for his work at Johnson & Johnson and with the Partnership for a Drug-Free America (now the Partnership for Drug-Free Kids).

Burke, who was concerned about teen drug abuse, served as chairman of the Partnership for a Drug-Free America from 1989 to 2005. He worked tirelessly to get media time and placements for the partnership’s messages about the dangers of illegal drugs, making its public service campaign the largest national public service media campaign in U.S. history.

A fun fact …
Even an employee as promising as Burke had moments of uncertainty early in his career. When he joined Johnson & Johnson, he was in charge of developing new products, and one of his first big product launches was a "resounding failure," says Gurowitz.

A Sign of the Times: The Story Behind Johnson & Johnson's Iconic Logo

So when he got called into the office of General Robert Wood Johnson, the company's CEO at the time, he was expecting to get fired.

"Boy was he surprised when Johnson gave him a big handshake and congratulated him, explaining that business was all about trying out ideas and making mistakes," adds Gurowitz.

How his legacy lives on today …
The company's commitment to the Credo remains as strong as ever, and Burke's Credo Challenge meetings still take place. Another one of Burke's ideas that lives on: the Credo Survey, an anonymous poll in which employees give feedback about how the company is living up to its promises.

In 2005, Johnson & Johnson honored his legacy by renaming its annual companywide marketing excellence awards as the James E. Burke Marketing Awards. The awards encourage others to follow in Burke's footsteps: to be bold and authentic, act with a sense of urgency—and always do the right thing.