Share
With Valentine’s Day upon us, it’s the perfect time to pay homage to an iconic couple featured in an ad for Red Cross® Kidney Plasters. Johnson & Johnson’s Chief Historian reveals why the public fell so madly in love with it.
By Johnson & JohnsonFebruary 13, 2018
Today's Top Reads Close

The image was instantly recognizable: A couple sit by the ocean's edge, sharing a sweet embrace. If you'd spotted this advertisement back in 1889, when it first debuted, chances are you would have been swayed by its heartwarming charm.

And that's exactly what marketers were hoping for when they first ran the ad for Red Cross® Kidney Plasters—medicated adhesive pain patches—in newspapers, magazines and pharmacy displays across the country.

But even they couldn't have divined just how much the iconic image would take hold with consumers: The ad ran for three decades!

Why America Fell So in Love With This Couple 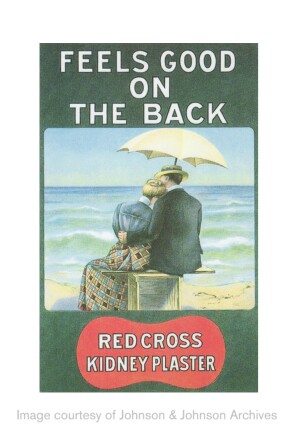 Kidney plasters quickly became one of the company's most popular medicated plasters, and the beloved ad helped to make the product even more recognizable at retail pharmacies across the country.

So why this particular iconography?

“The late 19th into the early 20th century was a time of great change—industrialization, urbanization, World War I,” Gurowitz explains. “Especially in times like that, people cling to what brings them comfort and a sense of peace, which this ad certainly did. It has a Zen quality. And the way the gentleman has his arm around the lady’s back jibed perfectly with the slogan.” 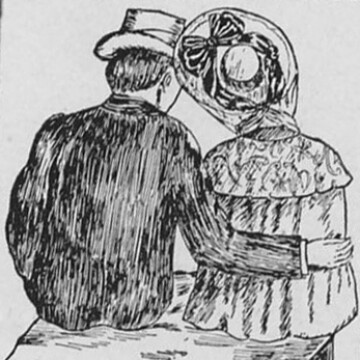 The ad had so much appeal, in fact, that Johnson & Johnson was swamped with requests for reprints. Fans mailed hand-drawn renderings of it to magazines, which published them. Even the government got in on the hype: In 1918, an ad ran for the U.S. Liberty Loan Campaign—which encouraged citizens to buy Liberty Bonds to help the government cover the country's war expenses—“starring” an American soldier and Lady Liberty standing in for the couple.

6 Cool Products That Can Help You Survive Winter

The ad ran until around 1919, before being retired, but the product was sold for several more decades. "In the 1930s, Johnson & Johnson changed the name to Red Cross® Plaster," Gurowitz says. "The company continued to make them until the early 1950s, when they were discontinued with the advent of newer oral medications for pain relief."

But the spirit of the product lives on today in such modern-day Johnson & Johnson products as the Ultra Strength Bengay® Pain Relieving Patch, which provides targeted pain relief via a self-adhesive patch.