ne was a dynamic leader. Another was a brilliant inventor. And the third, an ace at marketing. They were brothers Robert, James and Edward Mead Johnson, and in 1886, they brought together their respective talents to found a small family company that bore their surname.

That company, of course, was Johnson & Johnson.

When the trio launched their fledgling company, they had one building and just 14 employees. Today, Johnson & Johnson has offices in 60 countries and a 130,000-plus workforce. But while Johnson & Johnson may look a bit different than it did 133 years ago, the impact of its pioneering siblings can still be seen at the company to this day.

In honor of what would have been Robert's 173rd birthday this month, we take a look at six unique ways their influence lives on.

Johnson & Johnson’s instantly recognizable red logo (shown at right) is one of the longest-used company emblems in the world, explains Margaret Gurowitz

A Sign of the Times: The Story Behind Johnson & Johnson's Iconic Logo

Its cursive style is derived from the signature of co-founder James Wood Johnson, which can be seen on the company’s first official check from 1886 (shown at right). The now-iconic logo began appearing on such company products as aseptic gauze and cotton bandages the following year.

“Our logo illustrates just how personally connected the Johnson brothers were to their company,” Gurowitz says.

The now-ubiquitous first aid kit was invented following a chance conversation on a train ride in 1888.

Company President Robert Wood Johnson was riding the Denver & Rio Grande railroad line on a vacation trip to Colorado when he happened to sit near the railroad's chief surgeon and started chatting with him.

Robert learned that workers who were servicing the trains and laying down the line's cross-country tracks were often seriously injured due to the dangerous nature of their work. And because they were frequently stationed in more rural areas, far from medical facilities stocked with surgical supplies, some of these railroad employees died from their injuries.

Robert was moved to help and created the first commercial first aid kits—one for the railroad and another for general consumer use—that included such items as sterile dressings, sutures and surgical tape.

The Johnson brothers built their company with the aim to help people live longer, healthier lives, and Our Credo shows that their ideals are very much still alive today.

An Early Foray Into the World of Advertising 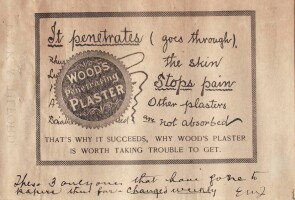 Edward Mead Johnson served as the company's first secretary and treasurer, but his legacy lies in how he marketed the company.

After establishing Johnson & Johnson’s second location, an office in New York City, he oversaw many of the company's earliest ads and launched Johnson & Johnson's first national advertising campaign in the late 1800s. The campaign spanned seven leading magazines of the day, says Gurowitz, and likely featured such popular-for-the-time products as papaya-based digestive tablets and medicated plasters, which were rubber-based adhesive patches that delivered medicine through the skin.

“His early efforts in spreading the word about company products began Johnson & Johnson’s long history of advertising, which has secured the company a place in the public eye for generations,” Gurowitz says.

A Significant Show of Support for Enlisted Employees

When the Spanish-American War broke out in 1898, Robert Wood Johnson instituted a progressive policy for the time: The company would hold positions for employees who served in the military—and continue to pay their salaries.

More than a century later, Johnson & Johnson offers these same benefits to its military employees, as well as paid time off after military leave to help them acclimate to life back home. 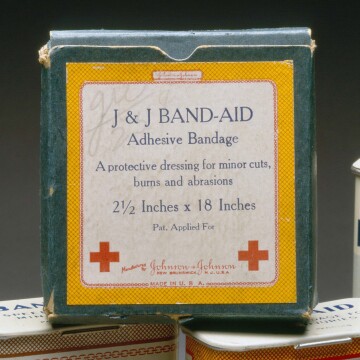 James Wood Johnson was the whip-smart inventor behind many of the early machines that mass-produced company products, including the popular medicated plasters. He also knew a good idea when he heard one.

By early 1921, BAND-AID® Brand adhesive bandages were on the market—and the rest is history. To date, the company has produced more than 100 billion bandages.

A Creed to Lead By

According to Gurowitz, Robert Wood Johnson was a strong leader with strong beliefs. “One of his most staunch principles was that patients always came first, ahead of any consideration of profits,” she says.

In 1943, that belief became the cornerstone of Our Credo, Johnson & Johnson’s guiding mission statement. It was written by Robert's son General Robert Wood Johnson—the company’s first Chief Executive Officer—just before the company went public. The document has helped steer the company ever since, and celebrated its 75th anniversary in 2018.

“The Johnson brothers built their company with the aim to help people live longer, healthier lives,” Gurowitz says, “and Our Credo shows that their ideals are very much still alive today.”