"I Had Four Strokes and Two Brain Surgeries—and Survived"

Share
Lisa Deck was just 21 when she had her first stroke. She would go on to have three more, as well as face a rare diagnosis of moyamoya disease. For American Stroke Awareness Month, we’re sharing her incredible story of survival and living with a chronic illness.
By Meghan RabbittApril 12, 2019
Today's Top Reads Close
T

That's how old Lisa Deck was when she suffered her first stroke—and it wouldn't be her last. So she began journaling, and then eventually blogging, to help her work through the highs and lows of her chronic condition, as well as advocate for other women who might be at risk.

It was for people like Deck that the Janssen Pharmaceutical Companies of Johnson & Johnson launched HealtheVoices, an annual conference focused on educating and empowering online patient advocates to help others living with health conditions.

“Our commitment to reducing risk and improving safety and outcomes for patients requires us to find new ways to listen and understand people’s needs and experiences,” says Jijo James, M.D.

For American Stroke Awareness Month, we’re sharing Deck’s story about how, thanks in part to a double brain bypass, she's lived to tell her story more than two decades later—and help other female stroke survivors along the way.

"My first stroke happened just days before my college graduation."


It was May 1997 and I was 10 days away from graduating from college, when I came down with the worst headache I’d ever had. Around the same time that the pain set in, my left arm went numb. I went to the hospital and the doctor sent me home, telling me my symptoms were probably the result of stress, and that if they continued, I should call a neurologist.
Share expand 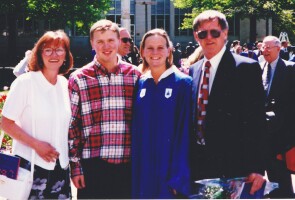 Deck at her college graduation

For the next couple of days, I stayed in my basement with the lights off to try to ease my continued pain. Then, my left leg and face went numb. I could move them, but it felt like I’d slept on them funny. At one point I was confused, and talking felt tricky. That’s when I went to a different hospital and was told I'd had my first stroke.

I was terrified. The official diagnosis was ischemic stroke—a deficit of blood flow without a known cause. My treatment post-release included an aspirin a day and occupational therapy for my left hand. And while I did get out of the hospital in time for my graduation, and was able to walk across the stage, it’s all a blur.

Four months later, I started my first job, in information technology consulting. I was with a client when I felt my left leg, arm and face go numb. This time, I went to the hospital right away—I knew it was another stroke, which was so frustrating. All I wanted to do was start working, as I'd planned.

I stayed in the hospital for three weeks and was diagnosed with central nervous system vasculitis, which is an inflammation of the vascular system in the brain. It's considered rare, and the causes aren't fully understood. The treatment: chemotherapy, prednisone (steroids) and blood thinners.

"I was diagnosed with my fourth stroke before the age of 40."


I stayed on a combination of these treatments for the next four years in an effort to keep another stroke at bay. And while I did have a third stroke in 2000, which doctors thought might have been the debilitating result of tapering off my prednisone, I was eventually declared in remission.

Soon after that, I met my husband, Brian, and within a few years, we got married and grew to a family of four. Through it all, I always felt fatigued, and would experience moments of numbness in my legs, arms or face. But as long as I stayed on my blood thinners and didn’t overdo things, I was fine.

In the fall of 2014, I was selected as a national spokesperson for the American Heart Association’s Go Red for Women campaign, which was designed to empower women to take charge of their heart health and raise awareness of the fact that heart disease and stroke are the #1 killers of women. It was an amazing chance to show that even someone who's not a 90-year-old grandfather can be prone to having a stroke. Even though my strokes were major, they didn’t cause the kind of permanent physical disabilities most people think of when they hear the word stroke, so I also wanted to let people know that, if it happens to you, you can survive—and thrive.

By that point, it had been 14 years since I’d had my last stroke. I was shocked to learn that I had developed moyamoya disease: a rare, progressive disorder caused by blocked arteries at the base of the brain.

I was doing OK until the following March, when my entire left side went numb—and the numbness didn’t dissipate as quickly as usual. I wasn’t worried at first; this had happened off and on throughout the years, so I figured if I rested and hydrated enough, it would just go away, like it did the other times.

Thankfully, I also had this thought: Here I am educating people about the importance of taking action, if needed, and I’m not following that advice myself. So, after four days of symptoms, I went to the hospital—and was diagnosed with my fourth stroke. I was 39 years old.

"To digest the thought of brain surgery is overwhelming."


I was shocked. By that point, it had been 14 years since I’d had my last stroke. And after the doctors did a series of tests to see what was going on, I was even more shocked to learn that they believed I had developed moyamoya disease: a rare, progressive disorder caused by blocked arteries at the base of the brain. Moyamoya is incurable, and the only treatment is brain surgery.

"I'm Living Proof You Can Survive a Brain Aneurysm"

To digest the thought of brain surgery is overwhelming. The fact that I’m a mother—my kids were just 6 and 8 at the time—made it even more so. How could I continue to be a mom, doing everything I need to do, and have two surgeries—one on each side of my brain?

Nevertheless, Brian and I traveled to a center that specializes in moyamoya disease, and within a week, I'd had both procedures, which aimed to improve the blood flow to my brain. Luckily my scars were under my hair, but I looked like I’d been beat up—I had a lot of bruising on my face, plus intense pain and nausea.

While I’ll never be fearless again—that’s not realistic—I’m taking baby steps toward feeling more confident. I’m exercising again. That’s a big deal. Last month, I flew to Tokyo to be part of a forum on stroke, which was also a big deal.

I stayed there another three weeks resting, recovering and working on regaining my speech in rehab. I received great news before heading back home: The surgeries had restored blood flow on both sides of my brain by seven times.

I was told that I would still experience some side effects—like fatigue, headaches and occasional numbness—going forward. And my speech might be an issue off and on, a prediction that came to pass a few weeks later, when I climbed into bed to read a story to my son, Zack, and found myself unable to speak. I tried sounding out the first word, then the second, but I couldn’t actually say any of them out loud. My heart raced and my breath quickened, and I somehow stayed calm enough to say, “I’m having trouble with this, buddy. Let me go get Daddy.”

Brian led me to our bedroom, where I broke down in tears. I was terrified something was seriously wrong. Again. He reminded me this was a normal result of the surgeries I'd had, and once I composed myself, I went back into Zack’s bedroom and said, “I’m sorry, I can’t read this right now. You’re going to have to practice reading to me.” And he did.

That was hard. As anyone with a chronic illness knows, these are the moments—the ones that prompt us to be deeply vulnerable—we all must continually face.


For a long time, I had a lot of anxiety and didn’t have a lot of trust in my body. Four years after those surgeries, that's changing and I’m finally starting to recognize myself again.

While I’ll never be fearless again—that’s not realistic—I’m taking baby steps toward feeling more confident. I’m exercising again, and I feel safe doing it. That’s a big deal. Last month, I flew to Tokyo to be part of an international global forum on stroke, which was also a big deal. 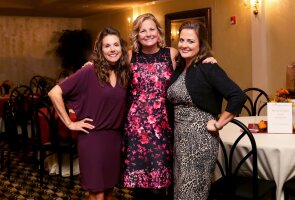 Deck (center) with her Sisters@Heart cofounders

I also founded a nonprofit with two other women affected by heart disease and stroke, Sisters@Heart, which aims to help others impacted by these conditions by providing financial assistance, if needed. We also help fund research projects. This organization is a major reason why I'm attending HealtheVoices: to meet with other advocates, find collaborations, network and get inspired.

Last year was my first time at HealtheVoices, and I took it all in filled with awe and appreciation; I left with new energy and passion. This year, I was asked to serve as a patient adviser, consulting on how to make the event even more meaningful and helpful for attendees, which has been such an honor. It's awesome to be in a place where others truly understand the patient perspective.

For a while after my surgeries, I’d given up on the possibility of things like traveling or even parenting Zack, now 10, and my daughter Kaitlyn, 12, without worrying that my health and the surgeries were scarring them in some way.

Now, I’m finally starting to get back to the Lisa who can trust in herself again, and I’m focusing more and more on the future—not just the past.

Join the HealtheVoices Conference Virtually
Can't attend in person? Follow @healthevoices and #healthevoices19 on Twitter to get live tips and highlights from the event.
Learn more