Share
In the lead-up to the recent International AIDS Society Conference on HIV Science in the Netherlands, we sat down with Hanneke Schuitemaker, who's hard at work on the holy grail of HIV research: a preventive treatment.

n 1992, as a young HIV/AIDS researcher in her native Netherlands, Hanneke Schuitemaker, Ph.D.

"I was so intrigued by the actual virus that it was really hard for me at the time to imagine the patients behind it," she recalls.

But that quickly changed.

As part of a patient outreach program, she met a young volunteer—an artist living with HIV who was undergoing treatment and wanted to actually "see” his virus.

Schuitemaker's team didn't have an electron microscope on hand to make that possible, but they were able to show him the effects of his virus on a cell culture.

“He had hoped to see that his virus was gone,” Schuitemaker says. Unfortunately, that wasn't the case, and after seeing the fear and despondence in the young man’s face, "I felt so useless," she adds.

The artist died shortly afterward, which forever changed Schuitemaker. “I felt not just empathetic, but almost hopeless," she says. "I realized we were so far off from being able to give him something that could help him. But that moment also gave me the energy to work even harder.”

And that's exactly what she's done ever since—devoting her professional career to uncovering a way to prevent HIV.

"I Can Think Outside the Box": The Making of an HIV Trailblazer


Schuitemaker, who grew up in a town in the northwest Netherlands, is the daughter of an electrical engineer father and a mother who was a bookkeeper—and one of very few working moms in their community.

She was inspired by her supportive, encouraging mother, who, she says, might have been a feminist in a later time but made do with her solid but modest career—a scenario that served to fuel Schuitemaker's own strong ambition.

Medical research fascinated the insatiably curious young Schuitemaker, and a college biology teacher steered her toward the medical biology field, where research—as opposed to patient care—takes a front-and-center role. 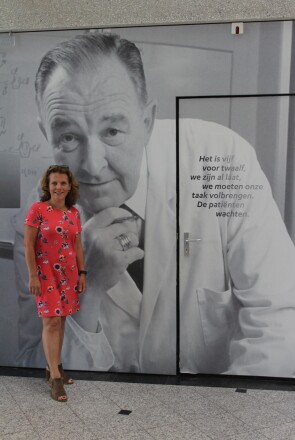 Schuitemaker in front of a photo of physician Paul Janssen, founder of Janssen Pharmaceuticals, at her office in the Netherlands

“I can think outside the box, I am curious and I ask the right questions," she says. So it's no surprise that Schuitemaker had the self-confidence to go where the enthusiasm was, and to leave jobs where it wasn’t.

As a Ph.D. student in oncology, she had a supervisor “who was pessimistic and didn’t give me energy,” she says. So she found a new job at the Netherlands Organization for Blood Supply, where a young head of research was starting to work on the HIV virus, and exuded the very kind of energy she was craving.

This was the 1980s, when the epidemic was new and rabid, the virus was mysterious—and discrimination against people with AIDS was cruel and intense.

"I thought it was so unfair that it was hitting young gay men, a community that was already so discriminated against,” she says.

Intrigued and impressed by the sheer force of the virus, Schuitemaker jumped at the chance to work on something so relevant and, as she puts it, "in the footlights of public interest."

At the time, it was known that HIV infected cells in the blood. Schuitemaker's research focused on the possibility that HIV could also infect other cells in the body, such as in the brain or lungs.

She'd “see hope in the eyes” of the patients she and her colleagues collected data from, and who were also giving permission to be autopsied for research in the event of their deaths. “They asked if we were close to a solution,” she says. "I was honest. I said we had nothing to offer them yet.”

When we got the study results, there was yelling and screaming. There were tears in my eyes. We are closer to a vaccine that prevents HIV than ever before.

But the breakthroughs did eventually come, which, interestingly, coincided with an emotional event in her own life.

Schuitemaker had married a fellow scientist, and the first of their three sons, Thomas, was born in 1995. Then, in January 1996, researchers at the Academic Medical Center in Amsterdam contributed to the discovery of highly active antiretroviral therapy (HAART), otherwise known as triple therapy. This new type of HIV drug regimen was composed of three different antiretrovirals that intercepted the rapidly mutating virus at different stages—in a sense outsmarting HIV.

This was a dramatic turning point for HIV patients: According to the Centers for Disease Control and Prevention, death rates from HIV infection in the U.S. declined 47% between 1996 and 1997, thanks to the new treatment.

“There were finally AIDS drugs that, when used in combination, could help keep people alive,” Schuitemaker says. "People [like that artist] could now be saved.”

While relishing this breakthrough, Schuitemaker half-surprised herself by falling madly in love with her baby. Not that she hadn’t expected to, but, she says with laudable candor, she was so busy working for years that she was constantly postponing motherhood.

She laughs. “I was 'rational,' right? I was always on top of my research and thinking I was really a 'head’ person," she says. "And then all of a sudden I was,” she laughs again, and says, “a 'belly' person!”

Still, she was a classic hard-working juggler: “Science and motherhood! After 10 days of maternity leave, I was working again. There was so much to do! I loved my children tremendously”—her two other sons, Ruben and Job, were born in quick succession—"but I equally felt there was such a big need to work hard and find these disease solutions.”


Today—about 25 years after meeting that young artist—Schuitemaker's energy has paid off.

She is now responsible for all viral vaccine programs at Janssen, including efforts to develop an HIV vaccine.

Although antiretroviral drugs can help extend the lives of people with HIV, they aren't a cure, which is why Schuitemaker is hot on the trail of new prevention tools. “We are closer to finding a vaccine that prevents HIV than ever before,” she says.

In 2010, Schuitemaker joined Crucell, a biotech company specializing in vaccines that was later acquired by Janssen. Five years later, she published a study in Science—in conjunction with various partners, including Beth Israel Deaconess Medical Center at Harvard Medical School—finding that an investigational HIV vaccine regimen, which first primes and then boosts the immune system to elicit a strong response to the virus, showed promising results in nonhuman primates.

And this month, The Lancet published results from the APPROACH study that found this regimen induces a robust immune response to HIV in humans.

Her team will be presenting the first long-term immune response data from this study at the IAS Conference in the Netherlands this week. These findings, says Schuitemaker, “are early stage, but promising. We now have to see if this vaccine can actually help prevent HIV infection.”

To do just that, a new study that aims to evaluate the vaccine in 2,600 young women is underway in sub-Saharan Africa, with results expected in 2021. Studies like these are critically important because although people with HIV are living longer, the population of infected people is continuing to grow. There were 1.8 million new HIV infections worldwide in 2016, with females disproportionately affected. Women and girls now account for nearly 60% of new infections among young people between the ages of 15 and 24.

"We're so excited about this study," she says. " 'Imbokodo,' the name of the trial, is the Zulu word for rock. It's part of a well-known proverb in South Africa that means 'you strike a woman, you strike a rock,' referring to the strength of women and their importance in the community. We're looking forward to seeing whether the vaccine is able to reduce HIV infection in this population that would benefit greatly from new preventive measures." 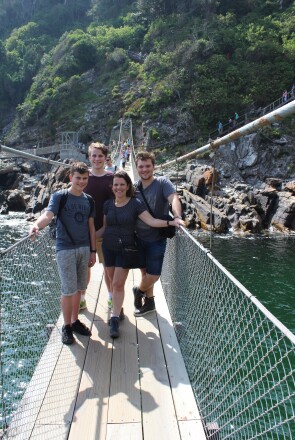 Schuitemaker on a hike with her three sons

As luck would have it, these professional breakthroughs are again coinciding with more personal ones for Schuitemaker.

“Three years ago, I got divorced after 31 years of marriage, and it was a shock,” she says. "I had to reinvent myself. I went through therapy, and created more balance in my life. I had always worked so hard; now I do fun things on the weekends, like go on hikes with my dog. I’m giving a TED Talk soon and it’s going to be about the theme of breaking free. My sons call me Mom 2.0. I used to be this impatient mother, always rushing and keeping all these balls in the air, and now I am totally relaxed."

Ruben, who’s in business school, agrees. “It’s very cool having a mom who’s a scientist," he says. "I’ve learned from her to show respect for people, to never give up and to live up to your dreams. What she’s doing is really amazing.”

Indeed it is: The recent research results from the APPROACH study her team conducted with Janssen’s partners were "so exciting that, even though we aren’t allowed to have alcohol in the office, I couldn’t resist bringing in a bottle of champagne,” she confesses. “When we got the results, there was yelling and screaming. There were tears in my eyes.”

So much for being just a "head" person. Schuitemaker is proof that hard work in science can save lives through medicine—and humanity.