A twentysomething in treatment for skin cancer. A Black woman who had melanoma as a child. Parents whose son died from the disease at age 30. 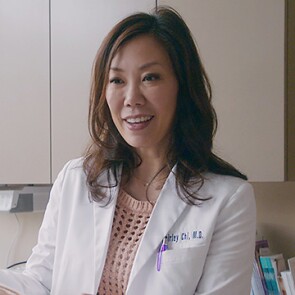 They’re just a few of the inspiring subjects of the new documentary In the Sun—the first film released by Neutrogena Studios, which was launched by Johnson & Johnson Consumer, Inc. to tell compelling stories that educate about the science behind skin health and inspire people to action.

Now available for viewing on YouTube, In the Sun, which counts Neutrogena brand ambassador Kerry Washington as an executive producer, also follows Shirley Chi, M.D., a dermatologist in Arcadia, California, as she educates and treats seven people in very different stages of life learning about, and grappling with, skin cancer.

In time for Skin Cancer Awareness Month, we spoke with Dr. Chi about some of the film’s top takeaways and what we all can do to protect ourselves from melanoma—the most dangerous form of skin cancer—when we’re in the sun.

More people are diagnosed with skin cancer each year in the U.S. than with all other cancers combined.

The numbers shared in the documentary are startling: More than 5.4 million cases of nonmelanoma skin cancer were treated in 3.3 million people in 2012 (the most recent statistic available). And at least one in five Americans will develop skin cancer by the time they’re 70.

Sunscreen 911: What’s the Right Product for You?

The main reason? Sun exposure. Sure, there are other risk factors at play (genetics, family history and skin tone to name a few), but sun exposure is, by and large, the biggest contributor to melanoma and other skin cancers. The statistics are concerning because a high number of skin cancer diagnoses may lead to a high number of deaths. As it is, more than two people die of the disease every hour in the United States.

The younger you are, the more dangerous sun exposure is. 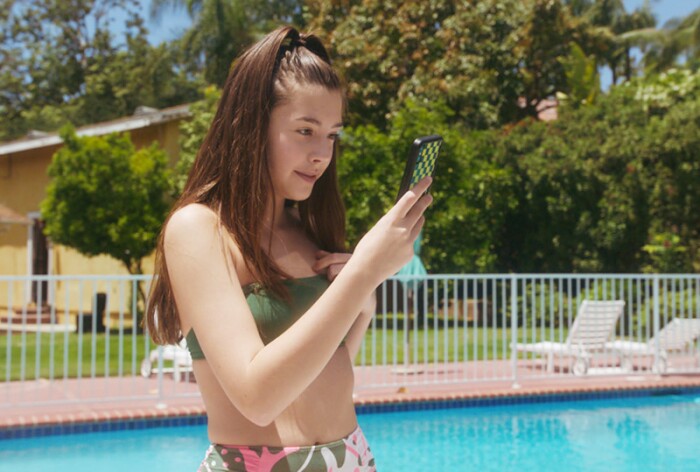 Skin cancer is one situation where youth is not on your side: Just one blistering sunburn as a child can double your risk of developing melanoma later on in life.

The Latest Science Behind Caring for Your Skin While on Chemotherapy

“Sun exposure is a form of radiation,” says Dr. Chi. “And radiation affects growing tissue more than it affects static tissue. When you're young you’re growing, your skin is growing, your organs are growing, so radiation is going to affect you more as a child than if you had exposure at a later age—and that’s true for all radiation-induced cancers.” (FYI: This is the same reason doctors limit X-rays and CAT scans for children.)

Skin cancer cases are on the rise.

It’s estimated that new melanoma cases will increase by 5.8% this year alone. Why are rates climbing? Dr. Chi says the answer is one part lifestyle, one part more vigilance.

What’s Really the Best Way to Treat a Sunburn?

Social media floods young minds with images of beautiful sun-kissed skin, sending the false message that we look better when we’re tan, says Dr. Chi. She believes this is a big motivation for young people to hit indoor tanning salons or to choose not to protect their skin when outside.

The other factor driving up those numbers is that doctors are spotting skin cancers sooner. “Professionals are trained to detect them earlier now, and we have better technology to do it,” she says. Plus, we, as a society, are becoming more aware of skin cancer, and we’re getting more routine skin exams (that’s a good thing!) so that may lead to more diagnoses. 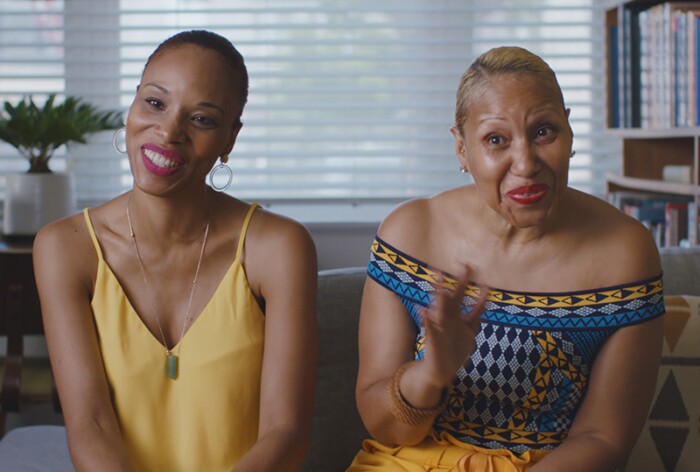 Fact: A dark skin tone does offer more UV protection than fair skin does. But it’s still not a guarantee of sun-safe skin. Research suggests that the darkest complexion has a natural SPF of 13.4 at best. The recommendation by the American Academy of Dermatology is a minimum of SPF 30.

Plus, “even people who have very dark skin still have areas on their body that have less melanin, such as the hands, palms and the skin around the nails,” says Dr. Chi. “And we’re seeing that people do get melanomas in those areas.”

But because people with dark skin tones assume they’re not at risk, they often don’t get checked for cancer until much later.

For that reason, “the prognosis for Latinx and African American patients with melanoma is much worse than it is for Caucasian patients,” Dr. Chi says.

Dr. Chi counsels a family in the documentary who’ve moved from the gray city of London to the golden state of California, where they learn they have to be more diligent about sun protection.

No matter where you live, though, the weather’s no excuse to skimp on sunscreen altogether: UVA rays, which penetrate the skin deeply and can damage the DNA of your skin cells, can reach skin even if the sun isn’t visible.

“When people ask me, ‘Should I wear sunscreen on a cloudy day? During winter? On a rainy day?,’ my answer is wear sunscreen every single day, as long as it’s daylight,” says Dr. Chi.

Skin cancer can be fatal, even in young people. 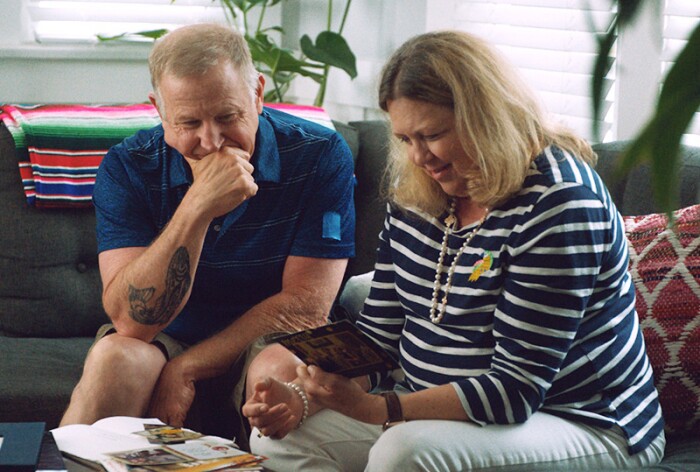 Because it can be highly treatable and curable when found early, many assume skin cancer is not that serious. But it can be deadly. It’s estimated that more than 7,000 people will die of melanoma this year.

In the Sun introduces us to parents of a man who lost his battle with the deadly skin cancer at age 30, and his story is part of a notable trend. Research has shown that men ages 15 to 39 are 55% more likely to die of melanoma than women in the same age group, potentially due to their relative lack of awareness and surveillance of skin cancer.

90% of melanoma cases are preventable, making skin cancer the most preventable cancer type.

Prevention starts with sunscreen. Look for a broad-spectrum formula, which filters both UVA and UVB rays, both of which contribute to skin cancers. SPF 30 should be the minimum, but Dr. Chi says the higher, the better.

Made in the Shade: A New Study Looks at Why a Beach Umbrella and High SPF Sunscreen Could Be a Good Combo

Reapplication is key, too. “If you’re outdoors, you have to reapply every two hours,” says Dr. Chi. “And if you’ve been swimming, it’s more like every 80 minutes.” What if you work inside all day? Apply sunscreen in the morning (you still get sun through your windows), then reapply before you step out for lunch or run an errand. Dr. Chi suggests a powder with SPF for easy reapplication over makeup.

Sunscreen is just one major cornerstone of prevention, says Dr. Chi. Beyond that, things like wearing a hat to protect your scalp, avoiding peak sun hours (that’s 10 AM to 2 PM) and wearing sun-protective clothing like rash guards will help keep your skin well protected.

Make sure, too, to see a dermatologist yearly for full-body skin checks, and go in for a visit if you notice any irregular skin patches or growths. When caught early, the five-year survival rate of melanoma is 99%.

Dealing with melanoma can be a lifelong journey. 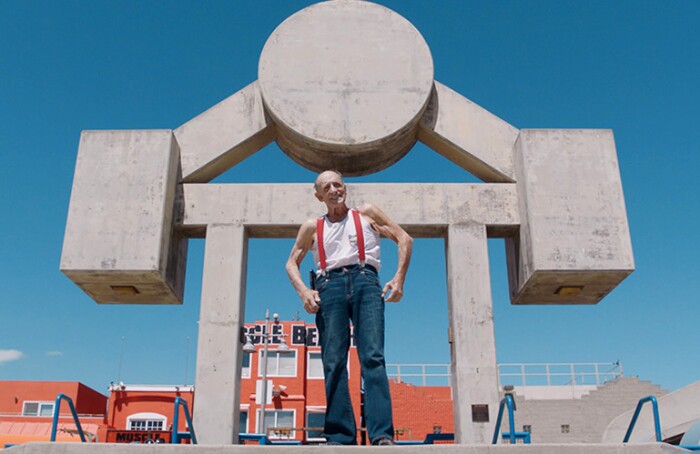 Even if you’re among the 99% who beat melanoma, you’ll need to stay on top of your skin checks for the rest of your life.

“Once you’ve had one melanoma, you’re at a higher risk for future ones—not only a recurrence of your original melanoma, but also new melanomas in other places,” Dr. Chi says.

Depending on the stage of your last melanoma, be prepared to see your dermatologist every four to six months for an exam. And if you’re undergoing treatment, you’ll need to go for CAT scans and/or PET scans every few months to check the progression of your disease for the rest of your life, as viewers witness an elderly man with melanoma doing in In the Sun.

That doesn’t mean you have to stay out of the sun for the rest of your life. With vigilance and proper protection, you can have a healthy relationship with its rays. Dr. Chi echoes the advice of a woman in the documentary who, at age 27, has just completed treatment for a melanoma: “Enjoy the sun, but not too much.” 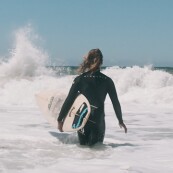 Watch In the Sun at Home
Stream the documentary for free, get expert advice to keep your skin healthy and help support the Melanoma Research Foundation.
Learn more