Could Changes in Your Microbiome Increase Your Risk of Colorectal Cancer?

37
That's exactly what researchers at Johnson & Johnson are trying to find out. By partnering on a new study that's looking at the role gut microbes may play in the disease—and focusing on the underrepresented groups most affected—they hope to advance early-detection strategies and potential treatments.
By Erica SweeneyMarch 25, 2022
Today's Top Reads Close

That's approximately how many bacteria live inside your digestive system. Known collectively as the gut microbiome, these good and bad bacteria play a part not only in gut health but in every type of condition, from autoimmune diseases to neurological disorders.

Of particular and urgent importance to oncology scientists at Johnson & Johnson: the microbiome's role in colorectal cancer.

Colorectal cancer is the third most common cancer diagnosed in adults in the U.S. and the second leading cause of cancer deaths. Family history, certain diets, heavy alcohol use and other factors are already known to increase a person's risk for colorectal cancer. But now, “there are more and more studies coming out suggesting that certain constituents of the microbiome—that is, specific microbes themselves—could play a role in increasing the risk of someone developing colorectal cancer,” says Kurtis Bachman, Ph.D., Vice President of Colorectal Cancer Interception at Janssen Research & Development, part of the Janssen Pharmaceutical Companies of Johnson & Johnson.

A new study being conducted by Persephone Biosciences with support from Janssen Research & Development aims to help scientists better understand the gut microbiome’s effect on the treatment, diagnosis and prevention of colorectal cancer. Researchers on the Argonaut study are working to discover whether the people most at risk for developing colorectal cancer have too many or too few of a certain type of microbe or if certain processes in the microbiome, like the production of metabolites or toxins, could lead to a higher risk of developing the disease.

The answers could potentially lead to the development of innovative new therapies.

For National Colorectal Cancer Awareness Month, we're exploring the ways that the microbiome could influence cancer and the ways Johnson & Johnson is working to harness this cutting-edge area of research to intercept the disease as part of its vision to eliminate cancer.

"Could Patterns Early On Indicate That Somebody Is at Risk?"

Colorectal cancer starts with a growth, known as a polyp, in the inner lining of the colon or the rectum, both of which make up the large intestine. Trillions of microorganisms, including bacteria, live in the large intestine, and this microbiome supports the immune system, protects against harmful pathogens and helps the body metabolize certain vitamins and amino acids.

Everyone’s microbiome is unique. Some patients at a higher risk for colorectal cancer may have certain microbes that produce toxins that can lead to DNA damage and specific mutations within a colorectal cell, Bachman says. However, scientists are only beginning to unravel how specific microbes cause these mutations.

Our ability to recruit a clinical trial population that reflects the diversity of the American population is key in ensuring that potential treatments can help people in the real world clinical setting. Including underrepresented groups really relates to a broader need to understand social determinants of health.

The Argonaut study may shed some light on this process. Researchers are enrolling 1,350 individuals—healthy people, people diagnosed with colorectal cancer and those at high risk for developing it—from clinical sites around the country and collecting their stool and blood samples to map their microbiomes and examine their immune systems. Medical histories will be taken, and subjects will be monitored for eight years through questionnaires to learn about changes in their health and lifestyle.

“What we're really trying to understand is: Are there patterns regarding microbiome changes early on that we can detect that may be an indication that somebody is at risk for colorectal cancer? Could we turn that data into new therapeutics? And could we potentially eventually turn that into preventive medicine?” says Stephanie Culler, Ph.D., co-founder and CEO of Persephone.

By monitoring participants long-term, researchers hope to not only gain insights into who actually gets colorectal cancer but also who’s most at risk for recurrence and who responds to treatment among those who do develop the disease.

The Urgency of Equitable Research and Treatments

African Americans are about 20% more likely to develop colorectal cancer and 40% more likely to die from the disease compared to other groups, according to the American Cancer Society (ACS). And understanding why is a key part of the Argonaut study.

Fifty percent of the study population comes from groups that have historically been left out of clinical trials, with 20% from African-American communities. This is crucial because most of the molecular, genetic and microbiome research of colorectal cancer has so far relied on subjects of European descent, according to Bachman.

“Our ability to recruit a clinical trial population that reflects the diversity of the American population is key in ensuring that potential treatments can help people in the real world clinical setting,” says Sandip Patel, M.D., associate professor at the University of California San Diego Health Moores Cancer Center, one of the Argonaut study sites. “Including groups that are at an increased risk of colorectal cancer really relates to a broader need to understand social determinants of health.” 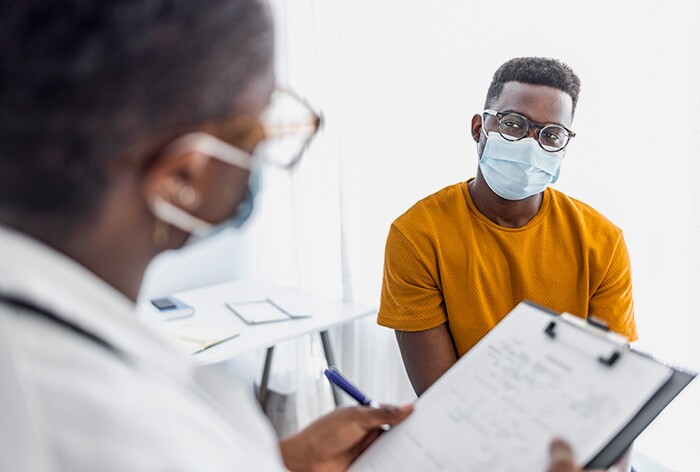 A variety of age groups is also being included. While the ACS recommends that people start getting screened for colorectal cancer at age 45, more and more, people in their 20s and 30s are being diagnosed with the disease.

“We really are hopeful that this diverse make-up is going to give us the data we need to start understanding aspects of the diversity and heterogeneity—that is, the different elements—of this disease,” Bachman explains.

The Argonaut researchers will be using DNA sequencing and machine learning to help them analyze the large, complex data sets that they are collecting. “We now have the technologies to not only collect the samples in a way that preserves the microbiome,” Bachman says, "but also the DNA sequencing and data science capabilities to understand the nuances and the complexity of this enormous data set and how it drives the disease process.”

4 Questions for a Data Science Innovator

When colorectal cancer is found at nascent stages, the five-year survival rate of the disease is about 90%, according to the ACS. But only about 40% of cancers are found at this stage.

In the future, it could be possible to develop a microbiome test to determine if someone has certain microbes in their GI tract that put them at a higher risk for colorectal cancer.

Currently, early detection of colorectal cancer depends on someone getting a colonoscopy, which not everyone does. So, as Patel explains, “noninvasive early detection is the holy grail.”

"The Argonaut study takes an in-depth look at the cancer microbiome and how it's affected by different systemic treatments,” he says. “The more we understand, the more we can help guide treatment decision-making and then potentially, in the future, maybe even early diagnosis.”

Bachman says it could also be possible one day to develop a microbiome test to determine if someone has certain microbes in their GI tract that put them at a higher risk for colorectal cancer.

“We need to further nail down those associations and correlations and understand what risk factors can be altered or treated to lower the risk of developing colorectal cancer,” Bachman says.

While he explains that there’s still work to be done to get there, Bachman believes that once someone knows they’re at risk for a disease, it often motivates them to change their habits or get screened more often, which can be empowering for patients.

The Next Frontier of Prostate Cancer Care

Culler agrees. She lost her grandmother to colorectal cancer, likely because she didn’t get a colonoscopy soon enough.

“We can prevent that,” Culler explains. “Part of the opportunity here is to advance medicine but also to spread education and awareness that if we can get checked out early, we can really prevent this horrible disease.”