Share
From scientists in research labs to CEOs at companies across the country, here's how one healthcare company is partnering with people from all walks of life to help drive change in how we treat mental disorders—and the stigma often associated with them.
By Lauren BohnMay 01, 2019
Today's Top Reads Close
T

he global impact of mental illness is staggering.

Mental health disorders account for an estimated 10% of the total global burden of disease. Major depressive disorder affects more than 300 million people and is the leading cause of disability. Worldwide, bipolar disorder affects 45 million people, and schizophrenia impacts more than 20 million people. To further complicate the situation, almost three-quarters of people suffering from mental illness live in low- and middle-income countries, where access to quality mental healthcare can be limited.

7 Things We Now Know About Depression

The seriousness and scope of these issues highlights the need for innovative thinking to help tackle this global problem. And innovation in the mental health space is something that Johnson & Johnson has long been focused on—including the work of Dr. Paul Janssen, founder of Janssen Pharmaceuticals, who helped discover some of the most important medicines for mental illness.

Today, Johnson & Johnson is more committed than ever to help lead the charge in creating new treatments and also new initiatives—like a coalition to help address mental health in the workplace—to spark change.

From research into how to address treatment-resistant depression to a pilot program for training healthcare workers in sub-Saharan Africa, we're looking at some of the ways the company has embraced innovation to help improve the lives of people who suffer from mental illness for World Mental Health Day.

Improving Access to Mental Healthcare in Underserved Regions of the World

"To treat mental illness, we need to bring services directly to the people,” says Ginger Smith-Swintosky

This very lack of local resources is one of the reasons why 76 to 85% of people with serious mental disorders living in low- and middle-income countries have received no treatment, according to the World Health Organization. To help address this concern, Johnson & Johnson kicked off a comprehensive pilot partnership with the Government of Rwanda and other organizations in 2018 to strengthen and expand access to quality mental healthcare in the country.

While many countries are good candidates for programs like these, the Rwandan Ministry of Health was already focused on the need for stronger mental healthcare to help its citizens deal with the aftereffects of the genocide that took place in the country 25 years ago, making Rwanda a natural partner for the pilot program.

“Working with the government, we’ll determine the prevalence and burden of disease—because if you don’t know how big the problem is, you can’t resource it appropriately with training, education, budget or policy," explains Smith-Swintosky. "Our goal is to help increase access to mental healthcare in communities, and enable access to essential medicines that are affordable and consistently available.”

One facet of the pilot program focuses on schizophrenia—a treatment area where Johnson & Johnson has long been a leader—and creating a platform for patients to have access to treatment with long-acting injectables, which has the potential to be particularly helpful to patients who don't have frequent access to medical care.

With the mobile phone platform, the Rwandan government has been able to educate almost 60,000 community healthcare workers in just a few months, compared to the approximately 25,000 workers they’d been able to train by traveling from village to village for several years.

Another aspect of the program is a collaboration with nonprofit Partners In Health (PIH) to help bring critically needed services to two districts in the Eastern Province of the country—Kirehe and Kayonza—and essentially build a new generation of mental healthcare professionals by having psychiatric nurses from district hospitals train nurses in local health centers to diagnose and treat mental health.

Early results are already positive, notes Christian Rusangwa, deputy chief medical officer, chronic care, Partners In Health. Not only have patients seen improvement in their symptoms, he says, but there has also been an economic impact—patients have missed fewer work days, enabling them to better contribute to their families and communities.

Technology has also played a part in the pilot program—in the form of mental healthcare training via mobile phone.

Johnson & Johnson partnered with the Rwandan Ministry of Health and Viamo, a digital technology company, to develop and roll out a mobile phone training platform, which was first used by Johnson & Johnson and several partners to help train community healthcare workers (CHWs) during the Ebola crisis. Through the platform, the Rwandan government has been able to educate almost 60,000 CHWs in just a few months, compared to the approximately 25,000 workers they’d been able to train by traveling from village to village for several years.

The training is delivered via a series of five-minute, prerecorded voice calls on such topics as early signs of mental disorders, best practices for mental health first aid and guidance on when to refer patients for additional care. The CHWs then take follow-up quizzes via their phones, answering multiple-choice questions to confirm their understanding of the lessons. And now that the platform is in place, the government will be able to use it for other kinds of remote healthcare training.

Smith-Swintosky says the true success of the company’s programs in Rwanda won’t be realized until 2023, when the pilot program will be completed and then hopefully scaled to other countries in sub-Saharan Africa. “But the goal always comes back to one thing: making sure people can get help where they actually live,” she says. “We’re helping to build a sustainable model for that.”

“We are entering a golden age of neuroscience—especially in mood disorders—when the opportunity to make a difference in the lives of millions of people worldwide is truly unprecedented,” notes Husseini Manji

Adults are often considered to have TRD if they are currently struggling with major depressive disorder and haven't responded well to at least two different antidepressants (taken at an adequate dose and duration) during the current episode of their depression. In fact, it is estimated that one-third of patients with major depressive disorder try multiple antidepressants without success and may be considered treatment-resistant.

Suicide is a staggering public health issue—only two forms of cancer have a higher annual death rate in the U.S. So creating better medical treatments to help is critical.

So Manji's team has been researching new approaches to help TRD patients, including potential treatments that may work to help restore nerve cell connections that have deteriorated with depression.

“Another important research area for us is a treatment to help people with major depressive disorder who are actively struggling with suicidal thoughts,” Manji highlights.

“Suicide is a staggering public health issue—for example, only two forms of cancer have a higher annual death rate in the U.S. So creating better medical treatments to help is critical,” he says, adding that his team is currently conducting clinical trials with such patients.

Manji also stresses that the goal of developing innovative treatments goes beyond just wanting to help individual patients—it’s also about trying to spark a cultural shift around the stigma of mental illness by showing that many mental health disorders require a medical response, just like other types of health issues.

“Our hope is that diseases of the mind will someday be viewed like any other illness," he says, "where there is no shame, just compassion.”

In the U.S., three in four employees report dealing with issues that have negatively affected their mental health. And globally, it's estimated that mental illness among employees will contribute to $16 trillion in lost output between 2010 and 2030.

It's stats like these that provided the catalyst for inspiring Johnson & Johnson to work with 40-plus CEOs from across the country and the American Heart Association to release a groundbreaking report, “Mental Health: A Workforce Crisis,” which offers seven strategies—certified by a panel of experts—to help create a mental health-friendly workplace and better support colleagues suffering with depression, anxiety and other mental health conditions.

“Recognizing that rising global rates of depression and anxiety are a growing concern for employers worldwide, we partnered on the report because we know we can’t change things alone,” says Jennifer Bruno

Another innovative initiative is One Mind at Work, a coalition Johnson & Johnson helped create and fund, explains Craig Kramer

It's just one of many ways Johnson & Johnson is committed to raising the bar to help make mental healthcare a priority worldwide. 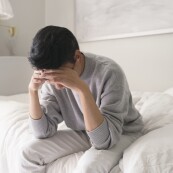