hen you think about groundbreaking healthcare innovations—creations that forever changed how medicine is practiced, like the invention of sutures—chances are you first think of medical device engineers and pharmaceutical scientists brainstorming in a lab.

But there's another category of equally inventive medical professionals who work on the very front lines of healthcare: nurses.

Who better to come up with practical innovations that can help transform lives than the men and women who spend the greatest amount of time with patients each and every day?

The goal: invite nurses across the U.S. to submit their ideas for forward-thinking medical devices, health technologies, protocols and even treatment approaches. Winners would receive up to $100,000 total in grants, mentoring from experts at Johnson & Johnson and access to the Johnson & Johnson Innovation, JLABS, ecosystem of healthcare start-ups.

And that's just the beginning: The company plans to roll out five more such challenges over the next three years, including the just-launched Nurses Innovate QuickFire Challenge in Perioperative Care, which is focused on innovative ideas that can help improve care for surgical patients before, during and after a procedure.

To help kick off National Nurses Week, we sat down with the just-announced winners of the first Nurses Innovate QuickFire Challenge to learn about their award-winning bright ideas—both of which are designed with the littlest patients in mind.

When Abby Winterberg Hess first started working as a nurse in the pediatric postanesthesia care unit (PACU) at Cincinnati Children’s, her colleagues gave her a valuable piece of advice: Kids who fall asleep fighting often wake up fighting. 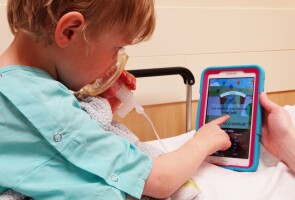 A prototype of Hess' anxiety-relieving app

“Studies have demonstrated that kids who are highly anxious and upset as they’re given anesthesia are more likely to have negative outcomes after surgery, including higher reports of postoperative pain and negative behavioral changes after returning home,” Hess says.

After becoming a nurse practitioner, Hess moved to the pediatric preop department, where she witnessed a number of techniques and interventions for helping children achieve calm before heading into surgery. But some patient populations were still challenging to soothe for even the most skilled clinicians.

"I thought that a breathing-controlled video game could provide a more engaging way to help kids practice using an anesthesia mask before surgery, and feel calmer while being induced, making the process easier for everyone involved," she says.

Hess knew there were already games in the iPhone app store that used breathing through a microphone to, say, blow bubbles or petals off a dandelion. These provided the perfect fodder for creating an inexpensive prototype. So she connected an anesthesia mask, which had no medication in it, to a tablet outfitted with a standard mic and gave it to children to try out.

The kids loved it. All of a sudden, this scary piece of medical equipment became a game controller.

Their response? “The kids loved it. All of a sudden, this scary piece of medical equipment became a game controller,” she says.

Hess' next challenge was to transform her DIY prototype into a more polished version that would work when anesthesia was administered and that could be integrated seamlessly into the fast-paced operating room workflow, among other necessities. Testing on this newer, truly functional prototype showed that not only did children ages 3 to 10 enjoy the game and fall asleep calmly after playing it, but parents and clinicians loved it, too.

The entrepreneur's focus now is to make the user interface and breathing-controlled mechanism simple to use in clinical practice, which is where the Nurses Innovate QuickFire Challenge comes in.

“I am beyond excited to work toward making this product available to all patients and medical facilities who could benefit," Hess says. "The Nurses Innovate QuickFire Challenge award from Johnson & Johnson will help make this possible."

A Bright Idea for Helping Moms to Breastfeed Longer

It was orientation day at nursing school at the University of South Florida when Lauren Wright found a seat next to Tram Pham. The women became fast friends, bonding over their shared passion for preventive wellness—and similar upbringings.

Pham was born in an American Red Cross refugee camp in Indonesia after her parents fled communist Vietnam. “When we got to America, we lived in Section 8 housing and had limited access to healthcare,” she recalls. “It made me want to do something to give back to others who are underserved.”

Wright, who also grew up in Section 8 housing in Florida, could relate. “I’ll never forget the experience of going to clinics back then,” she says. “There’s so much stigma for low-income families, and I hated that feeling. All of this led me to wanting to change how we practice medicine.” 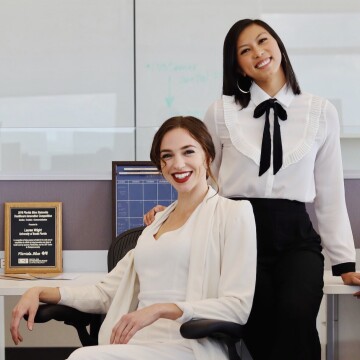 After becoming a nurse practitioner, Wright decided to get her Ph.D. and focused her research on preventing dysbiosis—a disruption in the gut microbiome that affects more than 4,000 babies a year and can lead to all kinds of health issues. “I learned that dysbiosis ends up killing a lot of babies,” she says, “and one thing we can control when it comes to preventing this from happening is increasing the amount of breast milk babies get.”

This sent Wright down a rabbit hole of trying to figure out what, exactly, was preventing women from continuing to breastfeed. In the process, she came across a stat that stopped her in her tracks: The World Health Organization (WHO) recommends exclusive breastfeeding for six months, and continuing it up through 2 years of age with the addition of solid foods. In fact, new WHO estimates suggest that if the majority of new mothers breastfed, more than 800,000 lives could be saved each year.

But in over 300 interviews with parents she conducted as part of a National Science Foundation (NSF) I-Corps entrepreneurship program, she learned that 92% of parents whose babies had been introduced to a bottle at some point didn't make it through the full 24 months.

In the U.S., one reason for this could be that bottles are typically introduced when babies are about 3 months old, when maternity leave often ends. When moms go back to work and start pumping their milk into bottles, it can lead to nipple confusion, which is when babies begin to take to bottle nipples and the faster milk flow they get, and wind up unable to latch back on to their mothers' nipples.

“I knew this was something we should be able to address,” Wright says.

The babies were screaming, the dads were confused, the moms were exhausted—and there I was in my lab coat, explaining that I was trying to create a bottle nipple that was more like a woman’s nipples, and asking the moms if I could please scan their breasts.

So in February 2018, she started attending breastfeeding classes with a 3-D scanner.

“The babies were screaming, the dads were confused, the moms were exhausted—and there I was in my lab coat, explaining that I was trying to create a bottle nipple that was more like a woman’s nipples, and asking the moms if I could please scan their breasts,” says Wright, laughing. “The moms were like, ‘Yes, anything you think is going to improve this process, by all means—scan away!’” 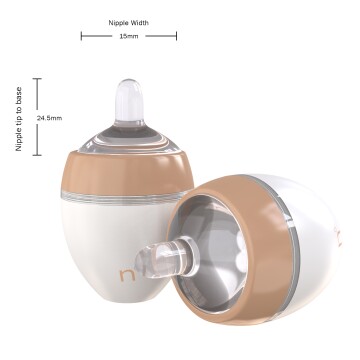 Pham came on board as a co-founder and chief operating officer, and the duo won a $53,000 grant from the NSF. Analyzing their research prompted them to create four bottles that represent the nipple shapes of the general maternal population, with each size designed to transfer milk at the same flow rate as the averages they’d collected from moms.

When they came across the Nurses Innovate QuickFire Challenge, they applied immediately. “It really spoke to us, because it’s about innovation—and that’s our background,” Pham says.

Their prototypes are currently being made. Wright and Pham plan to test the bottles with moms around mid-June, with the goal of having them on the market by September.

And while the $50,000 will help their start-up company, called The Natural Nipple, tremendously, Pham believes access to Johnson & Johnson mentors and resources is the ultimate benefit.

“Johnson & Johnson truly sees nurses as an untapped resource,” she says. “We’re often not recognized for our ideas. Now, we have the opportunity to learn about things like scaling our company, getting our product into hospitals and so much more. It’s incredible.” 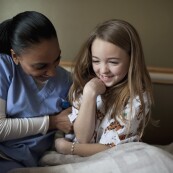