385
It's the sixth leading cause of death in the United States, with no existing cure. But these researchers are committed to finding better ways to diagnose, treat and prevent the debilitating disease, using everything from innovative biomarker tracking to a potential vaccine for early stage patients.
By Jennifer Rainey MarquezJanuary 20, 2020
Today's Top Reads Close
F

inding a treatment that can halt Alzheimer’s disease—or even one that can slow its progression—can’t come soon enough.

An estimated 5.3 million people over the age of 65 are living with the disease in the United States, where it’s the sixth leading cause of death. By 2050, that number is expected to more than double, to 13.8 million—one consequence of the fact that, by 2034, those 65 and older will outnumber Americans under 18 for the first time in the nation's history.

It’s sobering statistics like these that help explain why Johnson & Johnson has remained steadfastly committed to battling Alzheimer’s, a degenerative brain condition that can lead to memory loss and other forms of cognitive decline.

“Our company Credo states very clearly that we are dedicated to fighting diseases that affect humanity in a substantial way,” says Simon Lovestone

Over the past decade, Lovestone and fellow scientists at Janssen have been laying the groundwork—and developing the right partnerships—to help propel truly transformative research for Alzheimer’s and related neurodegenerative conditions.

“We’re at an inflection point now,” Lovestone says. “I believe the next five years will see significant advances in the search for a treatment.”

For World Alzheimer’s Month, Lovestone and other experts who are tackling Alzheimer’s from uniquely innovative angles explain why and how the future of treating the disease looks promising.

The Search for Alzheimer's Biomarkers—Through Digital Technology and Data

Over the past 10 years, science has advanced our understanding of Alzheimer's to the point where clinicians can diagnose the disease when people have very few or even no symptoms. This can be done using a PET scan to measure protein buildup in the brain, or a lumbar puncture to test protein levels in the cerebrospinal fluid.

And that has the potential to make all the difference in the trajectory of the disease.

“What we used to think of as the onset of Alzheimer's—the point at which cognitive impairment sets in—might, in fact, be a late stage,” Lovestone explains. “The period between when Alzheimer’s has begun affecting the brain, and when symptoms occur, can be up to 20 years. So if you could find a way to intervene during that in-between period, you have the potential to help avert the disease entirely.”

But such tests can be invasive, so how do you figure out who could truly benefit from them?

One way may be through finding biomarkers in the blood, and there's great progress being made on this front. Another approach would be to identify subtle changes that are indicative of neurodegenerative disease and that can be recognized and monitored using “smart” devices and wearable technology. One such diagnostic tool under development at Janssen is a memory test, administered via a tablet or smartphone, that has the potential to assess whether a person is having difficulty recalling words that have been spoken out loud—a common early sign of Alzheimer’s—through the detection of biomarkers.

Knowledge of easily detectable biomarkers like these could help lead to many treatment opportunities, including diagnosing Alzheimer’s before symptoms have set in, predicting how quickly patients will likely experience cognitive decline—and maybe even determining how well new therapies are working. 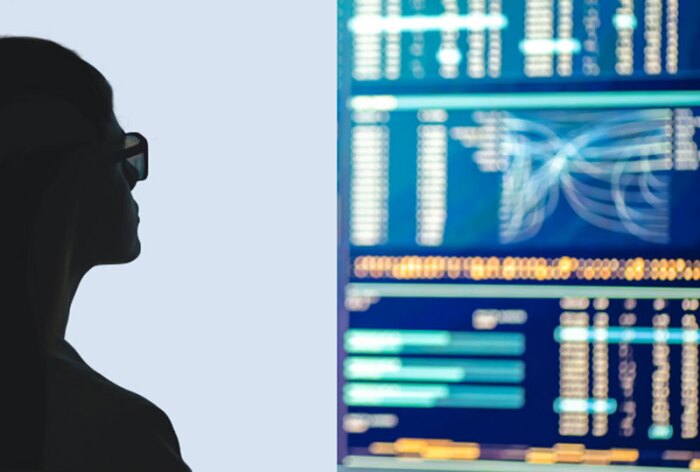 Pinpointing new biomarkers, though, requires access to vast amounts of data that most scientists don’t always have at their disposal.

“One of the obstacles to developing better early diagnostics is the lack of data sharing,” Lovestone says. “That’s a problem we’ve been trying to help solve for.”

In 2013, Janssen became the industry lead on the European Medical Information Framework (EMIF), a five-year project funded by the European Union to provide Alzheimer’s researchers with access to the information they need to help improve detection and diagnosis. By connecting scientists and data sets more effectively, EMIF was able to accelerate research in the field, generating new insights into how Alzheimer’s tends to progress in patients and helping to identify potential new biomarkers of illness.

And earlier this year, in partnership with the Alzheimer’s Drug Discovery Foundation (ADDF) and Japanese pharmaceutical company Shionogi & Co., Ltd, Janssen announced it would share a treasure trove of patient samples and data with researchers around the world who share the goal of accelerating the discovery of biomarkers.

Earlier this year, Janssen announced it would share a treasure trove of patient samples and data with researchers around the world who share the goal of accelerating the discovery of biomarkers.

In 2018, in collaboration with Gates Ventures and other philanthropic donors, ADDF created a diagnostics accelerator to help fund research to identify biomarkers and develop reliable diagnostic tests based on them. These funded researchers will now receive access to samples of spinal fluid, as well as data from a former clinical collaboration between Janssen and Shionogi.

“During that trial, we collected immensely precious samples for the discovery of new biomarkers, and especially for the validation of potential biomarkers," Lovestone says, "and I’m thrilled that the leadership of Janssen and Shionogi agreed that this was something we could provide for the good of humanity.”

Eventually, Lovestone and his colleagues plan to develop a database of information collected on the samples, which would also be made available to the world. “In terms of being able to further accelerate the search for biomarkers, it’s a multiplier for good,” he says.

So far over 600 companies have joined or graduated from JLABS, which now has 13 facilities across the U.S., Canada, Europe and Asia. Sixty-six of those companies are working in the fields of neuroscience and neurodegeneration.

“We’re very interested in the exciting science emerging in the field of Alzheimer’s,” says Guy Seabrook

Guy Seabrook,Neuroscience Therapeutic Lead at Johnson & Johnson Innovation California, Neuroscience Therapeutic Lead, Johnson & Johnson Innovation California. “In biotech and pharmaceutical development research, neurology is the second most active area after oncology. JLABS is an opportunity for us to cultivate relationships with these companies so we can help them make more and faster progress.”

These companies are a diverse group, working on everything from diagnostic tools to new drug targets.

Take Winterlight Labs, based at JLABS @ Toronto, which has developed a digital assessment tool that analyzes subtle changes in speech patterns to help determine whether someone is experiencing mild cognitive impairment. Using just two minutes of speech, the test is more than 90% accurate at detecting early stage Alzheimer’s. 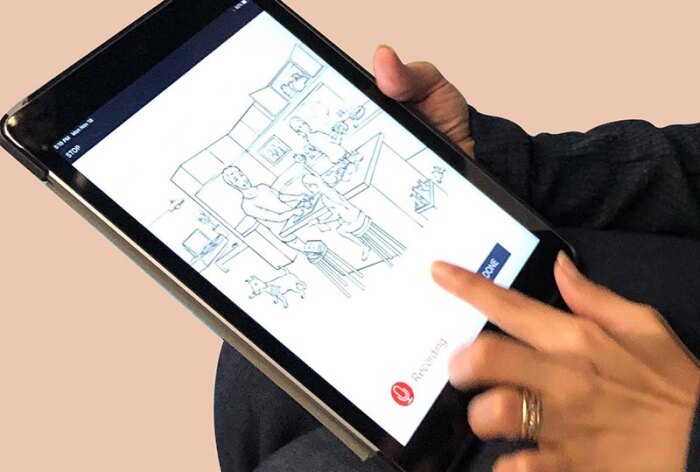 Winterlight Labs' Alzheimer's assessment test can be taken on a tablet

“Speech is a really complex behavior that involves multiple areas of the brain, and so when one or more of those areas is impaired, it can change how you talk,” explains Liam Kaufman, CEO of Winterlight Labs. “We’re using computational methods and artificial intelligence to objectively measure those changes, helping to identify patients during that critical early period.”

JLABS @ Shanghai: The Innovation Hub That's Poised to Shake Up the Healthcare Start-Up Scene in Asia

Kaufman saw a need for this kind of technology more than a decade ago, while pursuing a master’s degree in medical science. “I was working with Alzheimer’s patients, and saw how subjective the existing tests were—and how much they stressed out patients," he recalls. "When I met my co-founders, we realized we had a potential solution to this problem."

Winterlight's speech test is currently being used in clinical trials, and will be ready for evaluation by clinicians next year. Kaufman credits JLABS for this progress. “JLABS connected us to our first major investor and our second customer, and helped to bolster our overall credibility,” he says.

This is an exciting area for the field, to think about how we can use drugs that have previously been designed to treat dysfunctional immune systems to treat the symptoms of Alzheimer’s.

Some JLABS entrepreneurs are also exploring how chronic inflammation—the result of a dysfunctional immune system—could possibly contribute to Alzheimer’s disease. Inflammation is a normal part of the immune system’s response, and occurs when white blood cells flood the site of an infection or injury. But while inflammation is crucial to your body’s healing process, too much of it can cause a cascade of unwanted physical symptoms.

“We are learning that you do need some degree of immune activity to protect against Alzheimer’s, but it's a delicate balance,” Seabrook says. “Science has shown that if you disrupt the activity of microglia, which are cells that regulate the immune response in the nervous system, it can rev up the disease’s progression.”

Tiaki Therapeutics, which operates out of JLABS @ LabCentral in Cambridge, Massachusetts, is developing treatments that target the microglia, helping to restore their proper function to help treat dementia. Meanwhile, at JLABS @ San Diego, Vivreon Biosciences is working on developing drugs that may be able to slow the progression of Alzheimer’s by easing inflammation in the brain to minimize tissue damage.

“This is an exciting area for the field, to think about how we can use drugs that have previously been designed to treat dysfunctional immune systems to treat the symptoms of Alzheimer’s,” Seabrook says.

The Push for a Potential Cure

Alzheimer’s and other forms of dementia remain devastating conditions to both patients and their families, yet Lovestone says he feels more optimistic today than ever before.

For one thing, he notes, there has been substantial progress in the search for an Alzheimer’s treatment. Scientists have known for years that the brains of Alzheimer’s patients are filled with a protein called beta amyloid that accumulates in between neurons, which are the cells that send and receive signals from your brain.

Yet drugs that target the formation of beta amyloid have so far been unsuccessful at stopping or reversing the disease. Recently, though, Janssen has focused on a different approach aimed at tau, a protein that accumulates in thread-like “tangles” inside of neurons. 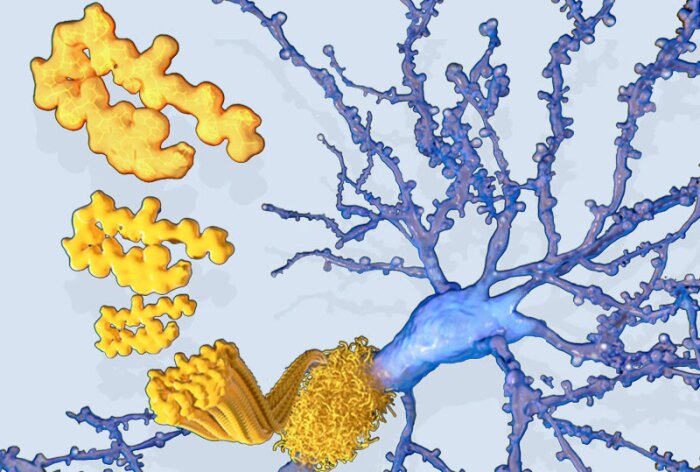 Beta amyloid protein plaques in the brain of an Alzheimer's patient

“These tangles can spread from one neuron to the next, killing brain cells,” Lovestone explains. “The compound developed by Janssen is designed to potentially prevent the spread of tau.”

Janssen also recently began an early clinical trial of an anti-tau vaccine, which could be given to patients even in extremely early stages of the disease, before symptoms have begun.

“The progress that we’ve made in the past few years has been enormous,” he says. “We have a much better understanding about how Alzheimer’s develops, which genes and other risk factors are driving the disease, and how it progresses. While there is still much to do, we are preparing for a future in which Alzheimer’s is a treatable—and even preventable—disease.” 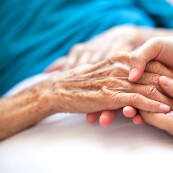