Share
In just three years, HealtheVoices has had a big impact on the online health advocate and patient blogger community. Here's how it came to be—and where it's headed.
By Molly TriffinApril 26, 2016
Today's Top Reads Close

In the spring of 2014, Rebecca Tillet 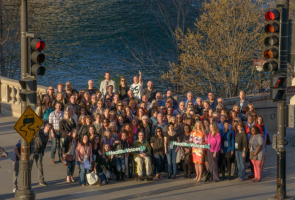 Attendees at the 2016 HealtheVoices conference in Chicago

Through her work in the consumer sector, Tillet had become familiar with BlogHer, a robust community for women bloggers who routinely gather at conferences and tradeshows—and she was surprised to learn that there wasn’t a similar network for online patient health activists.

“It didn’t seem right that there was such a strong support system for women writing about fashion and cooking, but nothing existed for people who were blogging about life-altering diseases,” Tillet recalls. “They were completely on their own.”

And she understood well the growing significance of social media advocates. “For years, our team had been partnering with bloggers to gain insight into how to do a better job of helping patients,” Tillet says, adding that online patient health advocates are often a trusted source of information.

But Tillet’s appreciation for the value, wisdom and comfort that health advocates can offer those in desperate times was also personal. When her partner, Patty, was diagnosed with breast cancer in 2009, Tillet became her caregiver. Three years later, she found herself battling ovarian cancer.

In both cases, Tillet turned to the online cancer community for support. 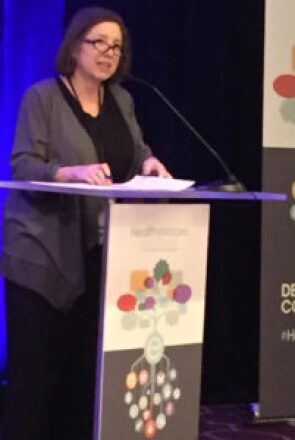 Tillet at the 2016 conference

“You want to hear about real patient experiences, and social media enables you to find people who’ve recently been through exactly what you’re going through,” Tillet says. “I found out things like: How does this chemo regimen really feel? How did you deal with the drains after surgery? And, most important, is there hope?”

Driven by her desire to support social media advocates, Tillet put the wheels in motion to launch a conference geared toward bloggers and online community leaders grappling with a variety of diseases.

When Pavis heard about the project, she immediately volunteered to help Tillet lead the venture. “I had previously worked in diabetes, HIV and inflammatory bowel disease and had seen first-hand the power of connection when online advocates come together in person,” Pavis says. “So I was really excited to bring together health advocates focused on different chronic health conditions and help empower them to see that many of them were dealing with the same important issues.”

And that’s how HealtheVoices, which is now marking its third year, was born.

Once Johnson & Johnson’s legal team green lit the idea in the fall of 2014, Tillet and Pavis set an ambitious deadline: They wanted to host the inaugural HealtheVoices convention the following April in New Jersey.

“It was a lot of pressure, but we knew there was a gap—and we wanted to fill it quickly,” Tillet says.

So Pavis set out to create an advisory board made up of eight leaders in the patient advocate blogosphere—luminaries like diabetes advocate Kerri Sparling and Ann Silberman, known for chronicling her journey with breast cancer—tasking them with such questions as who they’d want to hear speak, and which bloggers they’d invite to the conference.

Based on their conversations, the duo assembled a wide-ranging agenda. For example, the advisory group expressed interest in legal issues for bloggers, such as trademark, copyright and privacy concerns. So they brought in entertainment and digital media attorney Jimmy Nguyen to lead a session on defamation, intellectual property rights and endorsement guidelines.

Social media enables you to find people who’ve recently been through exactly what you’re going through.

With the program nailed down, Pavis then turned her attention to building momentum and excitement about the event among the online health advocacy community by forming a partnership with Everyday Health to help cohost and promote the conference. Considerable thought was also put into creating a comfortable environment specially tailored to people dealing with painful health conditions.

As attendee Julie Cerrone, who blogs about her trials with psoriatic arthritis, describes her disease, “I have a deep aching pain in my joints, and bone crushing fatigue. Sometimes I’m so tired that it feels like I have the flu.”

Since conference chairs aren’t known for being particularly cozy, Pavis brought in armchairs, and also set up a relaxation room with dim lighting, soft music and such welcome amenities as hot and cold packs. At the 2016 event in Chicago, they also added an energy room where attendees could take yoga classes and participate in energy management sessions.

The hard work was well worth it.

Josh Robbins, an advisory panelist and HIV advocate, admits that he was wary of the concept at first. “I would never have believed that a company would invest in people in this way without expecting anything in return,” he says. “It was incredible to see them give us the training, tools and emotional empowerment to help us do our work more effectively.”

As Tillet points out, the conference can help cover health advocates’ travel and lodging expenses, but conference-goers aren’t compensated to attend or write about HealtheVoices. 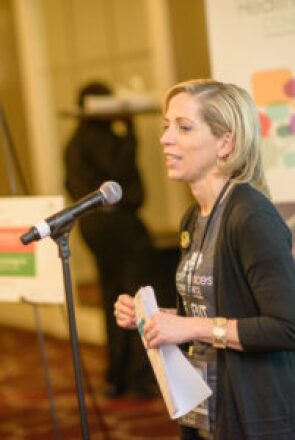 Pavis at HealtheVoices in Chicago

For Pavis, shifting mindsets was also a highlight of the conference. “We showed them who we are and how much we care, demonstrating that we really do put patients at the forefront of what we do,” she says.

Another key outcome: patient advocates expanded their networks—for the better.

“The conference broadened my horizons because I realized that we were all in this together,” Dr. Koffman says. “I had been reaching out to the CLL community exclusively in my blog, but I saw that my reach could go even further. The conference brought home that, while we may have different conditions, we are all fighting similar battles.”

For instance, when Dr. Koffman writes a post on how to get the most out of a doctor’s visit, he now sees that advice can apply to really any disease. He’s also started to ask other health advocates to write for the leukemia community on topics of common interest, such as why it’s equally important to care for the caregiver.

“Whether we’re dealing with cancer, schizophrenia, diabetes or HIV, we each have a certain set of expertise based on our own experiences and research, as well as a sense of inadequacy and impotence in our lack of knowledge,” Dr. Koffman says. “We bring what we know and what we don’t know to the table, and the group wisdom we generate is greater than what we can create on our own.”

Rheumatoid arthritis blogger Carla Kienast adds, “When I went to HealtheVoices, I found that there is an amazing connection between everyone who has a chronic disease, regardless of what it is. I used to consider myself this lone voice in the wilderness, and now I see all of us as part of a patient-powered chorus raising our voices and being heard.”

A Global Future for Health Advocacy

Now that HealtheVoices is in its third year, what’s in store for the future?

Sixty people attended the first conference, and in 2016, attendees reached nearly 100. This year, the number of attendees will top that. “I’d love to keep growing,” Tillet says. “Our goal is to make this the BlogHer for health advocates.”

Based on the social media response to the 2016 event in Chicago, the conference should have no trouble growing by leaps and bounds. On Twitter alone, #HealtheVoices16 trended in the #1 position at different points throughout the conference—ahead of “NBA playoffs,” “Coachella” and “Presidential Election.”

While we may have different conditions, we are all fighting similar battles.

And that’s just the beginning: The Janssen team plans to broaden the HealtheVoices brand as a whole.

“The conference is a hallmark, but beyond that, we want to provide online educational programs, such as webinars and twitter chats, to further support online advocates in their mission to help other patients,” Pavis says.

Whatever new developments emerge, HealtheVoices is on the brink of a monumental movement.

As Dr. Koffman puts it, “We are at the cutting edge of online health activism, and the future of advocacy is moving in a virtual direction. I feel blessed and privileged to be involved in HealtheVoices.”