154
From epidemic masks that the company introduced during the Spanish flu pandemic to work it's doing today on an investigational COVID-19 vaccine, learn how the company has been at the forefront of safeguarding global public health for well over a century.
By Tamekia ReeceAugust 12, 2020
Today's Top Reads Close

As you read this, Johnson & Johnson researchers are working around the clock in the ongoing battle against COVID-19, reviewing existing compounds that might prove useful as treatments and preparing to put an investigational vaccine candidate into clinical trials, among many other initiatives.

It's far from the company's first go-round at tackling a major disease outbreak though.

For well over a century, Johnson & Johnson has played a leading role in helping advance public health through the creation of innovative products—but also by educating medical professionals and communities about infectious disease well before the advent of most vaccines and other modern-day treatments.

“Prior to the era of major public health advancements leading up to the 1960s and 70s, contagious diseases like typhoid, diphtheria, smallpox, measles, polio and influenza took a huge toll on the population, so educating the public about how best to stop the spread of such diseases was crucial,” explains Margaret Gurowitz

And in more recent years, epidemics and pandemics such as Ebola, HIV/AIDS and Zika have cropped up in their place—and Johnson & Johnson has been at the forefront of helping to address them.

We take a look back at just some of the pioneering ways the company has built its legacy of helping to revolutionize public health. 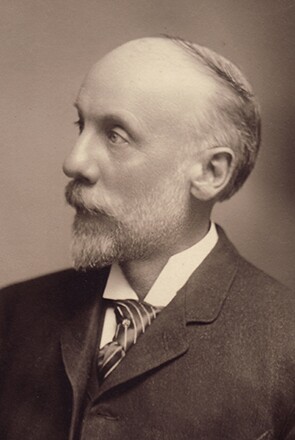 When Fred Kilmer moved to New Brunswick, New Jersey, he noticed that raw sewage was draining from homes out into street gutters, which then emptied into the town’s creeks—leading to the spread of deadly diseases.

In response, “Kilmer co-founded the New Brunswick Board of Health in 1880 to help bring sanitation to the city,” Gurowitz says. Together, he and other volunteers helped renovate the city’s water supply and sewage systems, worked to improve disease control and educated the community about hygiene.

So it's no surprise that he brought that same public health commitment to Johnson & Johnson when he joined as Chief Scientific Officer in 1889.

"Under his guidance, Johnson & Johnson published science-based literature for the public, such as the 'Household Hand Book,' which included advice about how to recognize disease symptoms, when to see a doctor and how to use Johnson & Johnson’s products to protect one’s family," Gurowitz says.

In the late 1890s and early 1900s, Johnson & Johnson also invented several products that helped limit the spread of infectious and contagious disease, including a disinfectant, antiseptic soap, fumigators to eliminate insects and disinfect households and public buildings and a soap to wash dogs (and other animals) so they wouldn’t bring ticks and disease-carrying insects into the home.

And during the 1910s, Johnson & Johnson worked with retail pharmacists nationwide to sponsor a national “Clean Up Week” each March—a Kilmer idea that helped popularize spring cleaning and encouraged people to disinfect areas inside and outside of the house to keep disease-causing germs at bay.

The company was one of the first to vaccinate its employees during the U.S. smallpox outbreak. 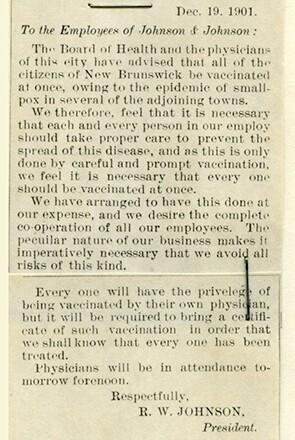 A 1901 letter to Johnson & Johnson employees about smallpox vaccinations

From 1901 to 1903, smallpox swept the East Coast of the United States. Of every 10 people with the disease, three died. Others were left with severe scarring over large parts of their bodies.

Johnson & Johnson jumped in to do its part to help prevent the spread of the disease.

“In 1901, to protect employees and help boost herd immunity, Johnson & Johnson vaccinated employees at the company's expense,” Gurowitz says. More than 500 employees were vaccinated per day, at a time when workplace immunization programs were rare.

“The company has always prided itself on its responsibility to each one of its employees, so this was a way to keep them safe,” she adds. This responsibility was ultimately codified in 1943, in a document known as Our Credo, a company mission statement that guides Johnson & Johnson to this day. 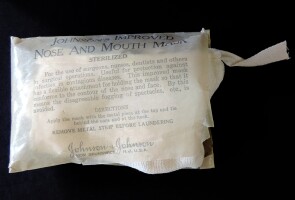 The global Spanish flu pandemic of 1918-19 was among the deadliest in history, infecting about 500 million people worldwide and killing up to 50 million.

“At that time, the company was already making surgical masks, so it started mass-producing epidemic masks during the influenza pandemic because they were critically needed to protect people and help halt the spread of the flu,” Gurowitz says.

The epidemic mask was made of several layers of sterile gauze (another Johnson & Johnson invention) to block germs and prevent the transmission of the influenza virus. The masks were later used in other outbreaks of pneumonia, scarlet fever, measles, whooping cough, diphtheria, meningitis and tuberculosis. 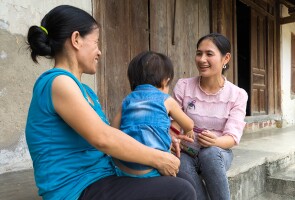 Under the leadership of Chief Scientific Officer Paul Stoffels, M.D., Johnson & Johnson is working to tackle some of the biggest global epidemics of our time through the development of new treatments and vaccines.

In 2012, after almost half a century without any no new drugs for tuberculosis, Johnson & Johnson introduced the first novel medicine for the treatment of multidrug-resistant TB (MDR-TB) as part of a combination therapy. The company has since delivered more than 235,000 treatment courses of the medicine for patients in over 140 countries. And earlier this year, the U.S. Food and Drug Administration approved a formulation for children, enabling the company to reach eligible younger patients suffering from MDR-TB.

Last month, the two-dose Ebola vaccine regimen developed by the Janssen Pharmaceutical Companies of Johnson & Johnson became the first vaccine in the company's pipeline to gain major regulatory approval when the European Commission granted it Marketing Authorization. That was a key step towards enabling broader access of the vaccine to communities most at risk of Ebola.

And in its quest to help combat the current pandemic, Johnson & Johnson recently announced that it had initiated first-in-human clinical trials for an investigational vaccine based on data published in Nature showing that the investigational vaccine elicited an immune response against SARS-CoV-2—the virus that causes COVID-19—in a preclinical, nonhuman study. 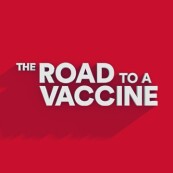