Look for the Sign: The Unique Way Johnson & Johnson Helped Ring in the New Year in 1915

Imagine sitting on a train a little more than a century ago, staring out the window into the dark wondering, “Am I home yet?”

If you happened to be traveling around December 31, 1915, in central New Jersey, you might have received your answer in the form of a huge electric sign that read: Happy New Year (pictured above). Underneath the cheerful greeting would have been the name of an iconic company: Johnson & Johnson. And instantly you would have known exactly where you were—New Brunswick, home to the company's main headquarters.

That eye-catching electric sign was a beacon of comfort for generations of travelers, says Johnson & Johnson's Chief Historian Margaret Gurowitz

Margaret Gurowitz,Chief Historian, Johnson & Johnson. “The company calculated that 50 million people a year would pass the sign while riding on the Pennsylvania Railroad,” she explains. “It was an advertisement, but it was also a landmark, to let travelers know where they were. It was very reassuring for people to see that big sign with the name of a company that made products they used every day.”

The first message simply spelled out the company’s name in 5-foot-high letters, but soon there were messages promoting the science behind the company's products and boosting awareness of retail pharmacies. 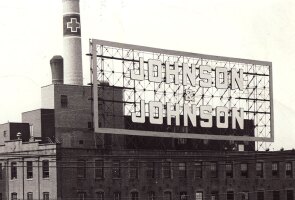 The sign was erected atop a Johnson & Johnson manufacturing building in 1909 (shown at right), at 102 feet long and 20 feet high, and comprised of 454 colorful lightbulbs.

The first message, which lit up in November of that year, simply spelled out the company’s name in 5-foot-high letters, but soon there were messages promoting the science behind the company's products, boosting awareness of retail pharmacies—and in 1915, spelling out that New Year’s greeting.

A few years later, during World War I, the sign displayed patriotic messages. “One such sign supported the Food Conservation Campaign, which encouraged Americans to voluntarily change their eating habits so we would have enough food to supply soldiers and civilians in Europe,” Gurowitz says. “And Herbert Hoover, who was the head of the United States Food Administration before he was the U.S. president, congratulated the company on its efforts.”

With room for just a handful of words, Johnson & Johnson had to be very creative with its messages. “The wording had to be very succinct—like posting on social media today,” Gurowitz says.

During World War II, the sign was taken down and in 1950, it was replaced with a slightly smaller sign that displayed the company's name and was set to automatically turn on at dusk and off at midnight.

As company manufacturing expanded across the country and around the world, the original building and the sign were eventually replaced by more modern constructions and forms of communication. But the photograph—and sentiment—of the holiday sign is still with us: Happy New Year!