Katherine Hannan: The Intrepid Nurse Who Battled the Deadliest Flu Pandemic in History

Share
Some 50 million people would succumb to the Spanish influenza outbreak of 1918. And this Johnson & Johnson employee went out of her way to be at the very front lines of caring for the sick.
By Erika JanesMarch 08, 2018
Today's Top Reads Close

For Johnson & Johnson employees, Our Credo is more than just a company mission statement—it’s a way of life. And even before the guiding document was crafted in 1943, employees personified its commitment to put the needs and well-being of the people we serve first.

For Women's History Month, we're featuring Katherine Hannan, an employee who took Johnson & Johnson’s commitment to well-being to heart and put her nursing skills to use on the front lines during World War I. 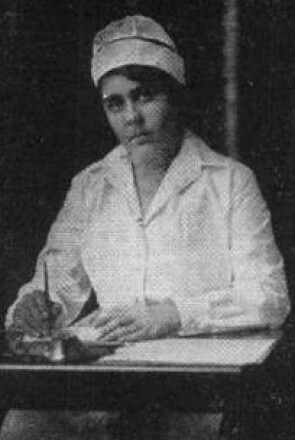 Her role at Johnson & Johnson …
Hannan, who was a nurse by training, worked in the early 1900s in Johnson & Johnson’s in-house advertising department, which was responsible for producing ads for such popular company products as sterile surgical dressings, Johnson's® Shaving Cream Soap and Red Cross® Kidney Plasters.

Why we think she’s worthy of being called a hero …
“When the United States entered World War I in 1917, the Red Cross put out a call for nurses and Katherine volunteered,” says Margaret Gurowitz

In fact, Hannan is the only known female Johnson & Johnson employee to have volunteered for military service during that time. “Roles for women in the military were far more limited 100 years ago,” Gurowitz says, adding that nursing was one of the few positions women could fill.

As a field nurse for the U.S. Army, Hannan was first sent to General Hospital #6 at Fort McPherson in Georgia, where she was quickly promoted to head nurse and superintendent, overseeing 100 nurses.

Meanwhile, the deadly Spanish influenza virus was spreading. The first recorded outbreak in the United States occurred at Camp Funston in Fort Riley, Kansas, on March 11, 1918. A few months later, Hannan was sent to Vladivostok, Siberia, to serve with the American Expeditionary Forces as chief nurse of the Evacuation Hospital, where she and fellow nurses treated wounded soldiers and those suffering from the flu.

This was no small feat: The pandemic would ultimately claim the lives of about 50 million people worldwide. 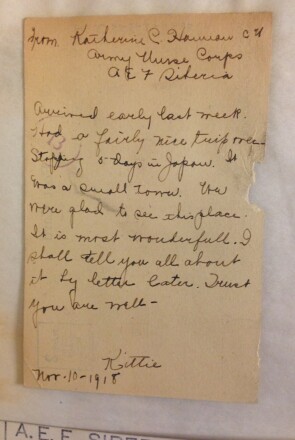 A fun fact about her …
Hannan was a second-generation Johnson & Johnson employee. According to Gurowitz, her father worked for the company as a member of the engineering staff and would have been in charge of the electrical generating equipment in the Old Mill, a Johnson & Johnson manufacturing facility. The company made medicated plasters there, among other products, and the site also contained the company’s first aseptic lab for sterile surgical products.

How her legacy lives on today …
Hannan was an early example of the company's long-standing commitment to helping communities around the world, paving the way for such modern company programs as the Extended Volunteer Leave Policy, which allows eligible employees to take up to two weeks away—including one paid—from their jobs to volunteer at a nonprofit of their choice.

Talent for Good: "My Company Let Me Take a Month Off Work to Volunteer"

She was also an embodiment of the company's commitment to supporting nurses, which is manifested today in the Johnson & Johnson Campaign for Nursing—an initiative that aids students pursuing careers in nursing and provides resources for those already in the profession.

“Hannan really exemplified the characteristics of giving back, stepping up and helping when help was needed—leadership qualities that are important at Johnson & Johnson to this day," Gurowitz says.