Share
For Pride Month, Clark Musto shares his inspiring story—one made possible, in part, due to the support he received at work.
By Darren FreiMay 31, 2018
Today's Top Reads Close

“There are organizations that say they care about their workers,” says Clark Musto, “but Johnson & Johnson didn’t just say it. They proved it."

For a workplace to be truly diverse and inclusive, it should not only attract talent from many different backgrounds, but also work to retain that talent and help make them feel they belong.

According to Musto, who transitioned from female to male, Johnson & Johnson not only talks the talk but walks the walk when it comes to supporting its transgender employees.

For Musto, who works for Janssen Pharmaceuticals, part of the Johnson & Johnson family of companies, that meant not only being protected by a harassment-free workplace policy, but also benefiting from a documented company process for helping employees transition that encompasses support from mentors across the company.

In time for Pride Month, we sat down with Musto to hear more about his brave story of deciding to come out as transgender. 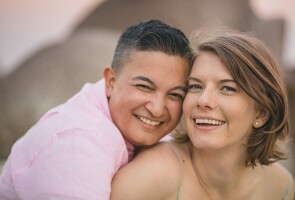 Clark Musto: "I’ve worked in the pharmaceutical industry for just over 10 years, starting out my career in New Jersey. The biotech sector was very conservative back then, but I came out as a lesbian at my first organization. Inside though, I’ve always felt that I was a man, despite having the physical characteristics of a woman.

Shortly after the 2008 recession, it seemed easier to find a job out west, so I came to the Bay Area. During this time, I met the love of my life. She knew that I wanted to come out as transgender, but she didn’t push it. She just said, 'You can change your name, or get hormone therapy, and I will support you in any way you need.'

So I started down the road of coming out again—this time as trans.

'You Have the Backing of the Entire Company'

At my last job, I was co-lead of the LGBTQ group. The company was quite progressive, but their insurance policy followed a common gatekeeping policy: If you want to move forward with gender-affirming surgery—for me, it was getting my breasts removed, known as top surgery—you needed to undergo at least one year or more of hormone replacement therapy first for the procedure to be covered by insurance.

This tends to deter people from going through with the surgery. Gender is a spectrum and identities include more than just being male or female, so there are many people in the community who do not identify in the gender binary, and who do not feel that hormone therapy is right for them.

The requirement certainly deterred me. I wasn't ready for hormone replacement therapy, but I also couldn't see myself living with that part of my body anymore.

Then, in February 2017, I was introduced to Johnson & Johnson through an LGBT-specific recruiting event called Lesbians Who Tech. I talked to an openly gay gentleman from the company's HR team who told me about all of the company’s great LGBTQIA+ benefits—including fertility, adoption and surrogacy assistance for same-sex couples and transition policies—and encouraged me to apply if I found a position I felt qualified for.

Sure enough, I applied for a clinical research manager position, and got the job!

When I called my new health insurance company as a Johnson & Johnson employee, they told me that being on hormones for a year before surgery wasn't a requirement—which meant that I could have hormone treatment and top surgery at the same time, so I could get everything done at once. I hung up the phone and thought: Wow, this can actually happen for me!

I was in shock, though, and also thought: How am I going to do this? I had just started my job. Was I going to be able to say, 'I gotta take medical leave now!'?

After sleeping on it, I reached out to the company’s Open&Out employee resource group and they connected me with Christine Desrosiers, Open&Out’s San Francisco chapter lead. I told her I was trans and knew our health benefits covered transition surgery, but I didn’t know where to begin.

That day changed my life. I’ll never forget Christine saying, 'Don’t worry—you have the backing of the entire company.'

I know trans people who felt they were going through the transition process all alone. When I share my story, many of them ask, 'Can you help me get into Johnson & Johnson?'

She also told me something that surprised me: 'I can connect you with our trans liaison—a person within the organization who can help you transition—if that’s what you need to do.'

The liaison turned out to be a wonderful trans woman named Jenna Cook. She sent me the Johnson & Johnson guidelines for transitioning in the workplace, and explained why they exist in the first place.

'Say you come back to work after surgery and your body is noticeably different. The first thing that people might think, especially in our industry, is that maybe you have cancer,' she pointed out. 'Would you want to tell people about why you had the surgery? Probably not, but when you’re transitioning, there will be other changes.' Having these guidelines not only helps the transitioning employee, but helps others understand the entire process.

Talking through things with Jenna also helped me realize that I could not do this on my own—that I could really use the great support my company was offering.

I put Jenna in touch with the HR person at my local Johnson & Johnson office, and we put together a communication plan, as well as a plan for my medical leave and what would happen when I returned. This all allowed me to head into my surgery feeling reassured. And while I was out on leave, the company even organized an education session, in collaboration with PFLAG, a nonprofit that supports LGBT people, for my colleagues.

'Inclusiveness Really Does Save People's Lives'

The moment that you’re perceived as trans can be scary, and the fact that Johnson & Johnson is aware of that made me feel safe.

I saw the presentation that was given while I was out, and there was a bullet point that really brought that sense of support home for me: 'Don’t "out" transitioning or transitioned co-workers. Gossip and rumor-spreading in the workplace about an individual’s gender identity/expression will not be tolerated.' It meant a lot to me.

Outside of work, I was already going by Clark. Upon my return to work a month after my surgery, thanks in part to the education session, colleagues were addressing me with male pronouns and by Clark. Every now and then, people would still refer to me as 'she,' and I would just correct them. The pronoun seemed harder than the name, but everyone has caught on now.

I’ve been on hormones for less than a year, so my body is still changing. I’m just going with the flow and allowing myself to transition physically as much as I feel I need to in order to see the real me in the mirror.

I haven’t had any issues at work. Honestly, the biggest change was talking to a new mechanic and being seen as a guy! But I feel like I’m really being seen as me for the first time—not just as a guy, but me.

Because I had such a great experience at Johnson & Johnson, I want to advocate for other companies to embrace similar policies and guidelines, and stress that inclusive policies really do change people’s lives. I know trans people who felt they were going through the transition process all alone. When I share my story, many of them ask, 'Can you help me get into Johnson & Johnson?'"