The Power of Prioritizing Your Vision

45
The idea of sight loss can be scary—but prompt diagnosis by an eye specialist can, in many cases, help preserve vision. For World Sight Day, let these two patient stories inspire you to take action and schedule your checkup.
By Beth HowardAugust 02, 2021
Today's Top Reads Close
I

t's a fact that's often repeated: People prize their vision over all other senses. Indeed, according to one study, many consider losing their eyesight to be the worst health ailment that could befall them.

Perhaps that's what makes these already staggering statistics even more alarming: More than 2 billion people around the world face impaired vision—yet almost half of these cases could have been prevented or are not yet diagnosed. And in the United States alone, 93 million adults are at risk for vision loss, but only about half have seen an eye doctor in the last 12 months, according to the Centers for Disease Control and Prevention. This is especially troubling because certain vision conditions can not only lead to vision problems and even blindness, but are also potentially life-threatening.

That's why Johnson & Johnson is committed to helping people protect their eyesight by researching new treatments and approaches for everything from children’s myopia to vision correcting surgery, as well as providing access to eye care for those in need through advocacy and education.

For World Sight Day, we're sharing some inspiring stories that drive home why it’s so important to keep an eye on your eye health—and the huge impact that a single vision exam can make.

"As my vision became cloudier, I came up with a truckload of ways to compensate."

"I vividly remember November 18, 1985, when Lawrence Taylor broke Joe Theismann’s leg on Monday Night Football. But the game isn't what stands out in my mind. What I'll never forget is that it’s the day I first became aware that my vision was off. 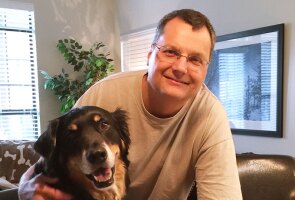 Neely and his dog

I was lying on my side with a pillow covering my left eye and when I went to sit up, my vision didn't change at all. I realized I was having difficulty seeing out of my left eye.

When I saw the eye doctor to get this checked out, I discovered I had keratoconus, a degenerative condition where the cornea, the clear front layer of the eye that is normally shaped like a sphere, for some unknown reason assumes a pointier cone shape. As a result, it loses its ability to function as a focusing element for the eye.

For the first couple of weeks, I was awestruck by being able to see individual blades of grass and leaves on a tree. I could see birds in a tree a quarter-mile away and even identify them.

At that time, the treatment was to wear rigid, gas-permeable contact lenses that force the cone back to a rounder shape. But you can’t do that forever, because eventually the lens comes to rest on top of the cone and causes scarring.

With keratoconus, you experience fuzzy vision and light sensitivity, which gets worse over time. It got so bad that I needed a corneal transplant in 2010. To reduce the chances of my body rejecting the transplant, I had to use steroid drops every day. Unfortunately, that led to the development of cataracts. As my vision gradually became cloudier, I came up with a truckload of ways to compensate, like always being in the front in conference rooms. 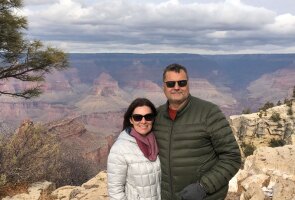 Neely at the Grand Canyon

Two years ago my eye doctor told me I had to have cataract surgery. I had the cloudy lens replaced and my vision improved instantly. Suddenly, everything was much clearer and brighter. For the first couple of weeks, I was awestruck by being able to see individual blades of grass and leaves on a tree. I could see birds in a tree a quarter-mile away and even identify them. The first bird I saw a few weeks after surgery was a huge owl in a tree about 200 feet away. I’m sure I would have missed it earlier.

I still have to wear eyeglasses to fine-tune my eyesight, but I can get 20/30 vision without any additional correction. My vision journey has had its ups and downs, but I couldn’t possibly think of a better outcome."

“Thanks to a second opinion, my son didn't lose his vision." 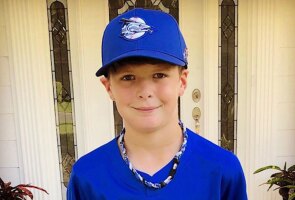 "When Christian was 2 months old, he was diagnosed with Marfan syndrome, a genetic disorder that affects the body’s connective tissue and can manifest in different parts of the body. It can lead to all kinds of vision problems, ranging from astigmatism to potentially sight-threatening disorders such as cataracts, glaucoma or even retinal detachment.

I have Marfan syndrome, too, and had vision issues that weren’t addressed until I was well into childhood, and ultimately had to have lens implant surgery in my mid-20s, and also wear glasses. My mother had been telling doctors for a few years that she thought I couldn’t see, but they dismissed her as an anxious first-time mother. So I wanted to be really proactive about Christian’s eyes. He had his first eye exam at 4 months.

It always surprises me when I hear that many kids don’t get eye exams until a teacher notices that they are having trouble seeing. I am a big believer in taking care of things before they become a problem.

The doctor didn’t find any problems, but over the next year, we noticed that Christian wasn’t picking up objects much, and when he did, he held them right to his face. He also didn't seem to be very outgoing and exploratory, like you'd expect a crawling baby to be.

When he was 14 or 15 months, the eye doctor confirmed that Christian’s lenses—the tissue behind the iris and pupil that helps the eye focus—had become detached, causing blurred vision. This is a big risk with Marfan syndrome, and he had to wear thick glasses to see. We patched his right eye aggressively to make sure his weaker left eye would keep sending signals to his brain and maintain his sight. He wore the patch all day long for two years. But our doctor didn’t offer any other options for treating him.

That’s when we took matters into our own hands. We found an eye surgeon who was able to remove Christian’s lenses and replace them with experimental lens implants on a compassionate use basis. The operation was successful, though Christian needed surgery to align his eyes when the lenses started to drift. But overall, the results have generally been great.

Christian used to have to wear his glasses all the time, but now he only needs to use them to see close up. The surgery has allowed him to have a typical childhood: He excels in school, loves sports—especially baseball—and makes friends easily. With glasses, he has fairly 'normal' vision in the right eye and around 20/70 in his left.

Christian’s eye surgeon told us that if we hadn't pushed for our son, he might have lost his vision in his left eye. It always surprises me when I hear that many kids don’t get eye exams until a teacher notices that they're having trouble seeing. I am a big believer in taking care of things before they become a problem. I don't want to think about how much Christian would be lagging behind his peers socially, emotionally and academically had we not advocated for more aggressive treatment." 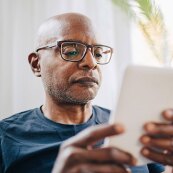