From Undecided to STEM Success Story: "Why I Owe My Career to Bridge to Employment"

Share
The Johnson & Johnson STEM mentorship program for high schoolers and undergraduates turns 25 this year. And who better to speak to its impressive track record than a Bridge to Employment graduate who went on to do great things.
By Meghan RabbittSeptember 05, 2017
Today's Top Reads Close
T

iffany Le was a junior in high school in San Jose, California, when her biology teacher encouraged her to apply to Johnson & Johnson’s Bridge to Employment (BTE) program in 2009.

“Applications were due in just a couple days and I remember being on the fence about it at first,” recalls Le, now 25. “I thought it might be just for science-focused students, and I didn’t really know what I wanted to do at that point. But I think my teacher saw a hunger in me—and I decided to go for it.”

Despite her initial ambivalence, Le was accepted into the program and placed in a business intelligence internship that summer with the IT team at LifeScan, part of the Johnson & Johnson Diabetes Solutions Companies.

“I’ll never forget my first day,” Le says. “I stepped into the cube of one of the engineers and asked him what he did, expecting him to talk about coding. Instead, he told me how he did his part to help people living with diabetes. It was inspiring to see how this employee truly believed in the company’s mission, and I quickly learned that everyone else also seemed to be working toward a united cause.”

Bridging the STEM Gap Through Bridge to Employment


BTE, the youth development program that paired Le with LifeScan, was created by Johnson & Johnson in 1992 to give promising high schoolers and college students access to three-year mentorships focused on STEM2D (science, technology, engineering, mathematics, manufacturing and design) fields.

At the time, youth unemployment rates were on the rise, says BTE founder Michael Bzdak, Ph.D.

Each BTE program is comprised of four partners that work together to mentor underserved high school students: a Johnson & Johnson operating company, a community organization, a high school and an institution of higher education.

With that framework in place, each program can be customized based on a particular community's needs, including everything from college visits to structured internships and even job-shadowing opportunities.

“The beauty of BTE is that we’ll have Johnson & Johnson employees sit down with local leaders, high school administrators and teachers, and representatives from institutions of higher education to help design a program that can best serve students’ needs," Bzdak explains. "So it’s global, but it's also geared to each community.”

The statistics certainly speak for its success: 100% of BTE participants have been accepted into at least one institution of higher education—and they tend to do better academically over time than their peers.

And we really mean global—now in its 25th year, and managed for Johnson & Johnson by FHI 360’s National Institute for Work and Learning, the program has blossomed from just one location in the U.S. to more than 80 BTE locales in 19 countries worldwide.

The statistics certainly speak for its success: 100% of BTE participants have been accepted into at least one institution of higher education—and they tend to do better academically over time than their peers, with 3% higher grades in science and 2% higher grades in math.

Le says the program certainly gave her a jump-start after college.

After completing the BTE program, she returned to LifeScan as an intern for three more summers, which she credits with helping her not only stay laser-focused as a student at the University of California at Berkeley—but also with landing a risk advisory consultant job with Ernst & Young a year before her 2014 graduation.

Not Your Average Internship


One of the reasons Le says she gained so much from her BTE internship is that it facilitated learning beyond a school setting. In addition to helping LifeScan employees with administrative projects—typical intern work—she was also given the opportunity to learn a new computer program, with the goal of training managers on the platform.
Share expand 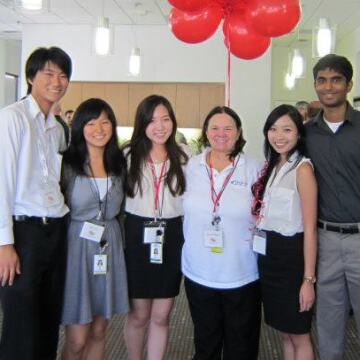 Le (second from right) during her LifeScan internship

“I learned a new tool called Statistical Analysis Software (SAS) inside and out,” Le says. “Then I conducted trainings for ‘super users’—the company’s department leads and other senior managers—so they could show their teams how to use it, too.”

It was an incredible opportunity on a few counts, Le says. For starters, SAS was a crucial program to know if she was going to pursue a career in data analytics. What’s more, teaching others how to use the software enabled Le to meet employees in marketing, finance and many other departments, enabling her to hone her relationship-building and public-speaking skills.

“When I think about it now, it’s crazy that I was charged with a task this big as a junior in high school,” Le says. “It goes to show how the BTE program is truly designed to help students get real-life experiences in the workplace. My BTE internship was challenging, which instilled a good work ethic in me early on.”

In fact, Le—who now works in the internal audit department for Workday, a cloud-based financial management and human resources software vendor—says she owes her career to BTE.

“I was always a motivated student, but I had no idea what I wanted to do after graduation," she explains. "But the chance to work in a corporate environment in high school gave me confidence—not to mention the kind of experience that influenced the trajectory of my life. BTE really helped me uncover an interest in technology and healthcare, inspired me to get a business degree and played a big role in getting me to where I am today.” 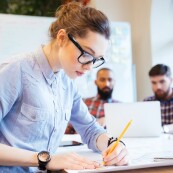 Are You a Woman Working in STEM?
Apply for the Johnson & Johnson WiSTEM2D Scholars Program and you could win $150,000 and other resources to advance your work.
Learn more 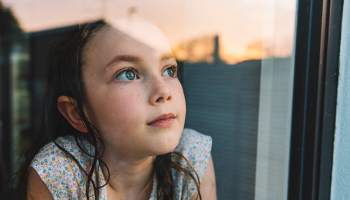