ith COVID-19 and the need for vaccines at the forefront of our minds as 2021 gets underway, it's become even more evident how such preventive tools—and other potentially lifesaving medications—can be crucial to helping keep the world healthy.

But just as crucial is helping ensure that the people who need them most are able to receive them.

Johnson & Johnson’s relentless focus on equitable access to healthcare is reflected in its consistent high ranking on the Access to Medicine Index (ATMI), a biennial report card that grades the world’s largest pharmaceutical companies on their efforts to distribute medications, vaccines and diagnostics to low- and middle-income countries.

For over a decade, Johnson & Johnson has placed in the top three on the list. For the new report released this week, it has once again earned a #3 spot overall, and advanced two places in the research and development category to take the #2 spot.

“Everyone deserves to live a healthy life, yet all too often disease or inequities in access to care compromise a person’s health," says Paul Stoffels, M.D.

Paul Stoffels, M.D.,Chief Scientific Officer, Johnson & Johnson, Chief Scientific Officer, Johnson & Johnson. "We are proud that our actions and collaborations to address diseases like HIV, tuberculosis and Ebola, which disproportionately impact some of world’s most underserved communities, continue to be recognized as industry leading by the Access to Medicine Index."

From its work to ensure that HIV medicines are available to people globally to its ongoing efforts to help end the tuberculosis epidemic and outbreaks of Ebola, we're taking a look at how the company's longstanding commitment to providing access to medicines has helped make it a possibility for people worldwide. 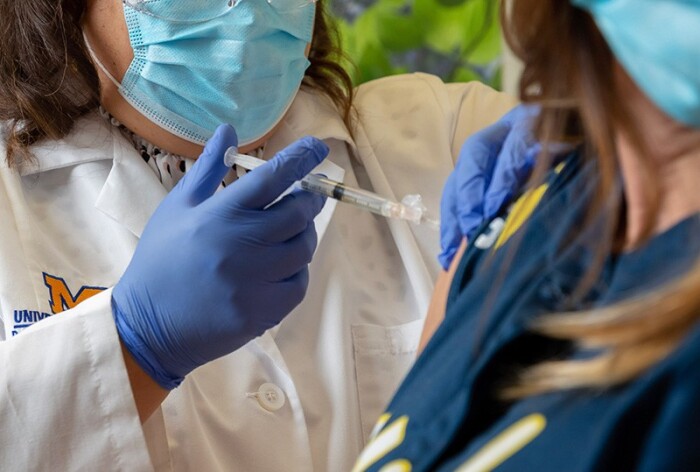 A little over a year ago, SARS-CoV-2, the virus that causes COVID-19, began to infect a cluster of individuals in China. Since then, the virus has rapidly spread to every corner of the globe, causing more than 2 million reported deaths and nearly 100 million diagnosed cases, as well as impacting the economies and social fabric of societies around the world.

Effective and safe vaccines have the potential to help end the COVID-19 pandemic, but developing such tools is only the first step—allocating and distributing the shots equitably to populations around the world is just as critical.

As part of this commitment, Johnson & Johnson will allocate up to 500 million doses of its investigational COVID-19 vaccine candidate, if it is proven to be safe and effective, to lower income countries.

In the fall of 2020, Johnson & Johnson joined 15 other life sciences companies in signing a landmark Communiqué on Expanded Global Access to pledge that vulnerable people in all countries will have access to potential drugs, vaccines and other innovations for COVID-19. As part of this commitment, Johnson & Johnson will allocate up to 500 million doses of its investigational COVID-19 vaccine candidate, if it is proven to be safe and effective, to lower income countries.

“From the moment our company launched its comprehensive global response to COVID-19, we understood that no one is safe until everyone is safe,” says Martin Fitchet, M.D.

By signing the communiqué, Johnson & Johnson also reiterated its commitment to enroll diverse populations in clinical trials for the vaccine candidate, conduct trials in lower-income settings and find ways to develop medical solutions that may be more easily used and distributed in those settings.

Developing a Vaccine for the Deadly Ebola Virus 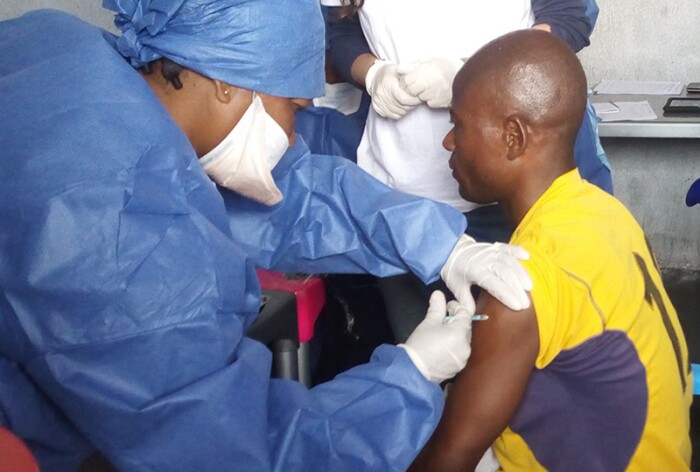 In March 2014, virologists confirmed the cause of a lethal outbreak of disease in southern Guinea, near the border of Liberia and Sierra Leone in West Africa. It was Ebola Virus Disease (EVD), one of the deadliest diseases known to man. It was the beginning of the worst ever outbreak of EVD, which spread through these countries for two years, killing more than 11,000 people.

Spurred on by this devastating epidemic, Johnson & Johnson accelerated its ongoing efforts to develop a preventive Ebola vaccine, launching 10 clinical trials across three continents in just one year, including a large study in Sierra Leone.

The development and approval of our preventive Ebola vaccine demonstrates the potential of our vaccines technology. Our vision is to stop deadly outbreaks before they can begin.

In the wake of another significant Ebola outbreak in 2018 in the Democratic Republic of the Congo (DRC), Johnson & Johnson donated supplies of the vaccine to a consortium of global partners, including the DRC government, to support a large clinical study in areas close to the outbreak zone, providing up to half a million vaccine regimens with the goal of preventing further spread of the disease to people at risk of infection. The company also promised to distribute 200,000 courses of the vaccine to help protect people living in the neighboring Republic of Rwanda. To date, more than 160,000 people in West Africa have been vaccinated through these initiatives.

In July 2020, the Janssen Pharmaceutical Companies of Johnson & Johnson received approval for its Ebola vaccine regimen from the European Commission, the executive arm of the European Union. The regimen became the first approved vaccine to be developed using Janssen’s AdVac® vaccine technology—and symbolizes Johnson & Johnson's vision of using the same technology to develop other vaccines to help address some of the world’s most life-threatening infectious diseases, including COVID-19 and HIV.

“With the right tools, we believe we can outsmart epidemics,” says Jos Noben

Diagnosing and Treating Tuberculosis Around the Globe 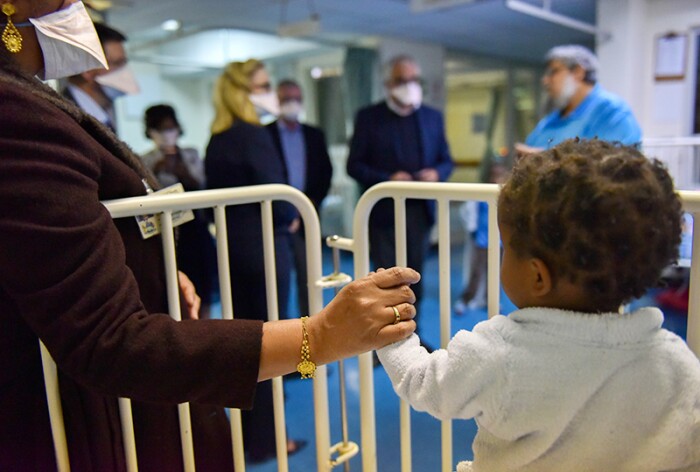 Ten million. That’s how many people develop tuberculosis (TB) every year, with 1.4 million dying from TB in 2019 alone.

Statistics like these are why Johnson & Johnson created a decade-long plan to help put an end to TB—an initiative that demonstrates the company’s commitment to supporting the United Nations Sustainable Development Goal target of ending the global tuberculosis epidemic by 2030.

To date, as part of its commitment to distribute the drug to those most in need over the past eight years, the company has provided more than 320,000 courses of the treatment in 144 countries.

One of the biggest obstacles in ending TB is that the disease is becoming increasingly difficult to treat due to growing resistance to first-line medicines. According to the World Health Organization (WHO), there were nearly half a million cases of drug-resistant tuberculosis (DR-TB) in 2019—and every untreated person with TB can infect up to 15 people in a year—making TB an urgent public health crisis.

As part of its 10-year plan, Johnson & Johnson has focused on continuing to expand access to its multidrug-resistant TB (MDR-TB) medicine. This has been especially helpful during the current pandemic: providing access to drugs that can be taken orally, as opposed to injectables, enables patients to safely complete treatment from home.

When this medicine was granted accelerated approval by the FDA in 2012, it was the first novel medicine to treat TB in more than 40 years. To date, as part of its commitment to distribute the drug to those most in need over the past eight years, the company has provided more than 320,000 courses of the treatment in 144 countries, including those with the highest burdens of TB. In 2020, the pediatric formulation of the company's MDR-TB medicine also received approval by the FDA.

In support of the WHO's recommended treatment guidelines, the company has also joined forces with the Stop TB Partnership, the Global Fund to Fight AIDS, Tuberculosis and Malaria and the US Agency for International Development (USAID) to develop a novel framework to help enable low- and middle-income countries to rapidly scale up use of the company's medicine.

“By joining forces with key partners, we’ve been able to accelerate global uptake of our medicine for treating multidrug-resistant tuberculosis,” says Ana-Maria Ionescu

Developing a Vaccine and Treatments for HIV 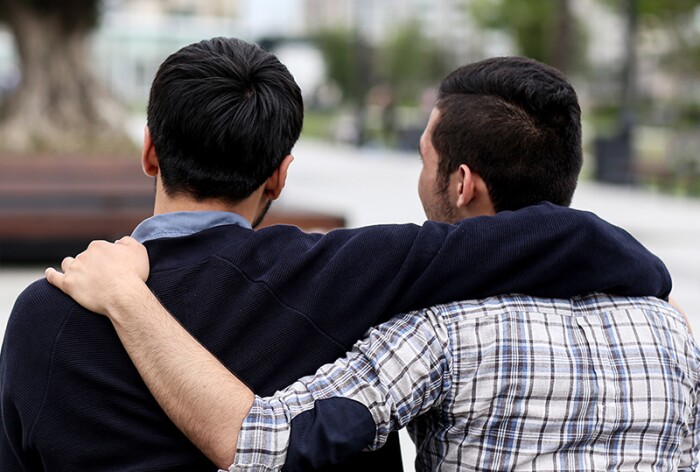 With 1.7 million new infections every year, HIV, the human immunodeficiency virus that causes AIDS, continues to be one of the most pervasive and deadly epidemics in history.

A vaccine to prevent HIV infection has the potential to change the course of the global epidemic, which disproportionately impacts low-income countries in sub-Saharan Africa and marginalized people throughout the world. For more than 15 years, scientists at Johnson & Johnson have been working towards this goal, developing a vaccine candidate employing the same advanced technologies that are being used in the company’s approved Ebola vaccine and investigational COVID-19 vaccine.

"AIDS Won’t Stop for COVID-19": Meet 3 Inspiring Women Who Are as Committed as Ever to Making HIV History

Currently, Johnson & Johnson is in the midst of two large clinical trials of its investigational vaccine regimen for HIV, making it the only company in the world with a preventive vaccine candidate in late-stage development.

In December 2020, Johnson & Johnson reached another milestone in the fight against HIV: The European Commission approved the world's first long-acting injectable treatment, which Janssen partnered with Viiv Healthcare to develop.

The trials, called Imbokodo and Mosaico, are taking place across four continents and involve populations who are disproportionately vulnerable to contracting HIV: young women in Africa, and men who have sex with other men and transgendered individuals in the Americas and Europe. Initial results from Imbokodo—which has completed its vaccinations—are expected later this year, and results from Mosaico, which is still enrolling participants, should be available in 2024.

In December 2020, Johnson & Johnson reached another milestone in the fight against HIV: The European Commission approved the world's first long-acting injectable treatment, which Janssen partnered with Viiv Healthcare to develop. The treatment enables eligible people living with HIV-1 to forego daily pill regimens in favor of injections given just once a month, or even every other month.

And in order to help transport its treatments to the places where they are needed most—like Uganda’s Kalangala District in Africa, which comprises 84 islands in Lake Victoria and has the highest HIV prevalence in the nation—Johnson & Johnson has launched a multiyear pilot program there to deliver much-needed medication via medical drones. The goal: bring lifesaving solutions to patients as directly and efficiently as possible, and prevent exposing healthcare workers to the dangerous boat journeys now necessary to access the area. 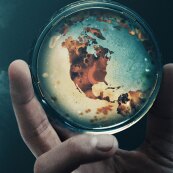