What’s your favorite historical example of how Johnson & Johnson led the charge in supporting women’s equality?

At that time, women were advised to get married and have a family. And if they worked outside the home, most found employment as teachers, nurses, domestic workers or manufacturing line workers.

Von Kuster took a different path and went to the University of Minnesota, graduating with a degree in chemistry in 1907. 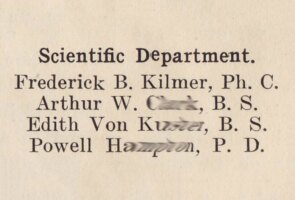 A year later, she was teaching and doing research at the university when Johnson & Johnson Scientific Director Fred Kilmer reached out to her. (How did he find her? It’s possible he read a research paper of hers, but we just don’t know.) Kilmer offered her a job as one of three staff scientists in the company’s scientific department, where she would be testing raw materials and conducting research and development.

And while today we don’t think much about relocating for a career opportunity, in 1908, it was unprecedented for a 23-year-old woman to move halfway across the U.S., from Minnesota to company headquarters in New Jersey, to take a job. She was a real trailblazer.

It was also an incredibly big deal for a company to hire a female scientist as there were very few opportunities for women in science. In fact, jobs in the industry were so rare at the time that they don’t show up in employment data. Few women even studied science at a college level: The number of women getting science degrees was so small that it's difficult to measure their numbers from that time.

Of course, the hiring of Von Kuster wasn’t the only example of Johnson & Johnson’s commitment to women back then. Eight of Johnson & Johnson’s 36 department supervisors at the time were women. And Kilmer actively advocated for women to pursue careers in pharmacy, which was often the first point of contact in healthcare for many patients.

Johnson & Johnson’s willingness to put women in positions of responsibility in the early 20th century illustrates values that are core to Our Credo today: inclusivity, diversity and equal opportunity.