Notes from the Field: 4 Ways the Civil War Figured into Johnson & Johnson's History

39
In recognition of Memorial Day, we're taking a look back at how the war—and the people who served in it—helped influence the company's trajectory.
By Jessica HendersonMay 20, 2020
Today's Top Reads Close
T

he Johnson brothers didn't establish their eponymous company in New Brunswick, New Jersey, until 21 years after the Civil War had ended, but the War Between the States actually helped inspire its founding two decades later.

In honor of Memorial Day, we’re shedding light on some little-known facts about how the war shaped Johnson & Johnson—and the company's legacy of supporting veterans and servicemembers, which includes a military leave policy that's benefiting employees in the National Guard or Reserves being deployed in response to the COVID-19 pandemic.

The older brothers of the company's founders were Civil War soldiers.

The three brothers who founded Johnson & Johnson—Robert Wood Johnson, James Wood Johnson and Edward Mead Johnson—were too young to serve in the war, but two of their older brothers served in the Union Army as part of the Pennsylvania regiment. 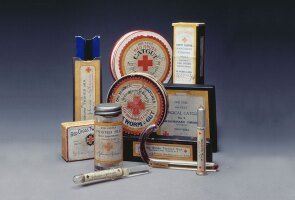 “Doctors on the Civil War battlefield had to perform surgery very quickly, in primitive conditions, at a time when sterile conditions didn’t exist," says Margaret Gurowitz

This unmet healthcare need ended up playing a big role in the company's mission when it was founded in 1886: Johnson & Johnson was the first company to mass-produce antiseptic surgical supplies in 1887, including sterile sutures, gauze and bandages (shown at right).

Johnson & Johnson once owned a company that provided surgeons with supplies during the war.

One of the many artifacts in the Johnson & Johnson museum archives is an 1865 tourniquet made by Codman & Shurtleff, one of the oldest surgical instrument manufacturers in the United States, which supplied surgical kits and instruments to surgeons in the field during the Civil War.

While we don’t know exactly what was in each kit, “a typical surgical kit used during that era contained scalpels, long knives, a variety of saws and forceps and a tourniquet,” says Gurowitz. Tourniquets (like the one shown at right) helped control bleeding by restricting blood flow to the limbs and were often used during amputation, a common wartime procedure.

Johnson & Johnson acquired Codman & Shurtleff in 1965, by which point the company had become known for its production of innovative tools for surgery, helping Johnson & Johnson to further its capacity to meet patients' needs before divesting Codman (as it was later known) in 2017.

Johnson & Johnson figured into a popular novel that references the Civil War.

The revolutionary qualities of Johnson & Johnson’s sterile dressings and sutures are so renowned that author Wally Lamb mentions their invention in his historical novel, "The Hour I First Believed."

A character in the book, former Civil War nurse Lizzy Popper, learns about Johnson & Johnson’s sterile dressings and wishes they had existed during her career. “This medical discovery is significant but 20-odd years too late in coming,” Popper reflects in her diary after learning about their manufacture. “It might have saved hundreds who died in their beds.”

It’s a sentiment Gurowitz can agree with: “Our sterile dressings and sutures would later help address the same types of battlefield injuries that were sustained during the Civil War and subsequent conflicts.”

In fact, beginning with the Spanish-American War in 1898, Johnson & Johnson made dressings specifically for the military, and during World War I, even mass-produced a sterile wound-irrigation system invented by a French surgeon and an English chemist to treat wounded soldiers during trench warfare—an innovation from which Civil War surgeons and patients would have benefited greatly.

One of Johnson & Johnson’s most important connections to the Civil War is also one of its most personal. Years after the war ended, one of the Johnson brothers who’d served came to work at his family’s company.

He was in charge of the company’s Highland Park, New Jersey labs across the river from Johnson & Johnson’s campus in New Brunswick and was also one of the founders of that town’s first volunteer fire department.

It was the beginning of Johnson & Johnson’s long history of serving and supporting military veterans, a legacy the company proudly continues to honor to this day through benefits for servicemembers such as full company pay while they’re on active duty, paid time off for acclimating to civilian life after their activation, employment support for military spouses and more.