Share
Brad Heidrich’s diagnosis with a deadly cancer at age 13 changed the course of his life—and inspired the person he would become: a Janssen scientist dedicated to working on therapies for blood cancer. For Blood Cancer Awareness Month and Childhood Cancer Awareness Month, we share his incredible story.
By Kristen MasciaMarch 12, 2019
Today's Top Reads Close
I

n the summer of 1994, Brad Heidrich, now a Senior Scientist at the Janssen Pharmaceutical Companies of Johnson & Johnson, was at home on a school break and flipping through the channels on TV when he stopped on a documentary about an athlete who'd lost a limb to cancer.

Like most healthy, carefree kids his age, Heidrich, then 13, hadn’t spent much time thinking about cancer. But the film moved him. A day or two later, while shooting hoops in his driveway, he felt a wave of empathy.

“We had a long, hilly driveway, and my basketball fell down the hill. It was always doing that, and it always drove me nuts,” he recalls. “I remember thinking: Wow, what if I lost my leg like the guy in the movie? I wouldn’t be able to run after the ball. The thought sort of stuck with me.”

Sometimes Heidrich wonders whether the universe had been trying to tell him something that day, to prepare him for the extraordinary trial that lay ahead, in the not-too-distant future.

A Heavy Diagnosis for a Young Teen

A couple of months later, Heidrich was crouching down at his school locker when a lacerating pain cut through his right knee. “It was like a knife,” he remembers. His mother took him to an orthopedist, who ran an X-ray and discovered the source of his pain: a tennis ball-sized tumor covering the better part of his distal femur, which is the area just above the knee joint. 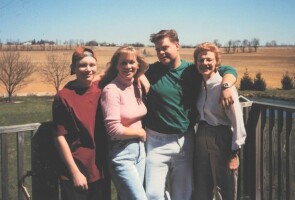 Heidrich (left) in 1995, when he was seven months into his cancer treatment, with his mom, half-brother and grandmother

Few experiences in life are as profoundly rearranging as a cancer diagnosis. For a 13-year-old who’s just figuring out who he is and confronting all of the usual challenges that come with being a teen—raging hormones, peer pressure, new and uncomfortable social situations—it’s even more formative. It becomes a defining challenge that, for better or worse, shapes the person you go on to become.

Heidrich’s diagnosis with a rare form of osteosarcoma, a cancer of the bone, forced him to grow up fast.

A week after his diagnosis, while making the first of what would become many drives with his mom to get treatments, he asked her, point-blank, if he was going to die.

Since his diagnosis, his mother—a single parent who taught English at a high school not far from their home in Northampton, Pennsylvania—had been a “mess,” Heidrich says. Still, like any child would, he hoped for her reassurance.

Instead, she offered the truth.

“ ‘I don’t know,’ ” Heidrich, now 37, remembers her saying. “She didn’t want to lie to me. It was the first and only time in my life she didn’t tell me everything would be OK.”

Heidrich's first job out of graduate school was with a pharmaceutical company, where he got the chance to put his talents to use in a drug discovery group formulating treatments for cancer. Through this research, Heidrich quickly realized he’d found his calling.

Heidrich’s grueling, yearlong treatment regimen involved an initial period of chemotherapy, followed by surgery to remove his tumor. Heidrich underwent three procedures, including the replacement of half his femur with a metal rod. After that came another round of chemo so potent that, by the last few months of Heidrich’s protocol, he needed to take sedatives to stomach it.

Heidrich missed the entirety of eighth grade, and was homeschooled for his freshman year of high school. To save his leg, surgeons had to remove part of his thigh. Due to all the procedures, many of the physical things Heidrich had loved to do—like scramble after rebounds on the basketball court or sprint to first base during a baseball game—were suddenly off the table.

Heidrich during cancer treatment, following surgery on his thigh

Heidrich admits that high school was hard. “I was embarrassed by what had happened,” he says. “I was physically deformed, with footlong scars on my leg, and I never wanted to wear shorts. You don’t want to have to tell anybody why you have a limp, why you weren’t in school for a year and a half. That was always very awkward to deal with.”

But over the years, as he recovered, grew stronger and gained maturity, Heidrich found that what he'd endured had actually given him direction. By the time he entered the first year of his master’s program in biotechnology, he had a solid sense of “what I wanted to do,” he says. “When you go through something like this, you understand the life you have is pretty precious.”

Heidrich's first job out of graduate school was with a pharmaceutical company, where he got the chance to put his talents to use in a drug discovery group formulating treatments for cancer using RAF inhibitors, which target a protein mutation associated with melanoma.

Through this research, Heidrich quickly realized he’d found his calling.

“Knowing you’re paying it forward gives meaning to what you do," he says. "The best way I could see to do that was to be involved in projects that could benefit patients.”

Since joining Janssen in 2008, Heidrich has helped discover and develop treatments for blood cancers, such as acute myeloid leukemia, diffuse large B-cell lymphoma and multiple myeloma.

Specifically, Heidrich works on immunotherapies, which are treatments that harness the power of patients’ immune systems to fight their disease. For several years, Heidrich helped develop bispecific monoclonal antibodies, which are proteins that bind to an immune cell and a cancer cell at the same time, bringing the two close enough for the immune cell to attack the cancer cell.

The patients really drive me. Last November, we had the opportunity to meet with some patients, and one of them told us about a friend who became gravely ill and passed away following a battle with cancer. Patients are waiting—I’m always thinking about that.

He’s also contributing to research in the exciting immuno-oncology space with CAR-T cell therapies, which take a patient’s immune cells and re-engineer them to recognize and destroy malignant cells.

"I've Been Living With Advanced Prostate Cancer for Almost 20 Years": One Man Shares His Treatment Journey

“The patients really drive me,” Heidrich says. “When we sit in meetings with senior leadership, the one thing we always talk about is what we can do for patients and how quickly. Last November, we had the opportunity to meet with some patients, and one of them told us about a friend who became gravely ill and passed away following a battle with cancer. Patients are waiting—I’m always thinking about that.”

Knowing that the work he does every day has the power to change people’s lives keeps Heidrich engaged, energized and devoted to what he does. 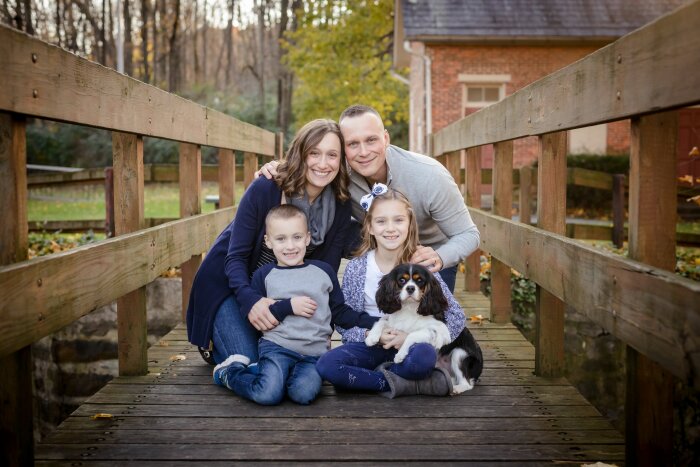 Heidrich today with his wife, Julie; children, Abby and Ryan; and dog, Tucker

He knows it sounds pat, but the married father of two—daughter Abby is 8, and son Ryan is 5—says he doesn’t take a single day for granted.

“My chemotherapy only killed about half of my tumor, so it’s always been a question of, ‘Will it come back?’ You just never know,” he says. “But that gives you perspective. I tell everyone this, and they think I’m crazy—but I think cancer was the best thing that ever happened to me. It forces you to ask yourself what you’re going to do with the time you have left, and what kind of person you’re going to be.”