Shortly after earning her bachelor’s degree in history, Margaret Gurowitz

Margaret Gurowitz,Chief Historian, Johnson & Johnson stood in the kitchen of her East Brunswick, New Jersey, home listening to her mother tell her she needed to find a summer job. At that moment, the phone rang.

It was the dean of her school, Douglass College, which is part of Rutgers University. “Someone from Johnson & Johnson just called and said, ‘Send me the best history student you have,’ ” she said. Gurowitz, who'd studied 19th-century medicinal history as part of her undergrad curriculum, had won academic awards for history and was getting ready to enter a master's program in medieval history that fall. “If you’re interested, I won’t recommend anyone else,” she added. 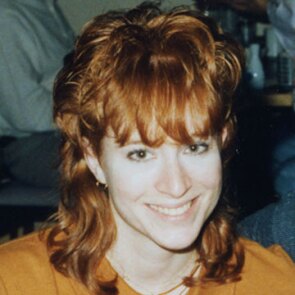 Margaret Gurowitz circa her first job at Johnson & Johnson

The gig she was being recommended for—and ultimately got—was helping the company's Chief Communication Officer at the time research his biography of Robert Wood Johnson, the company’s CEO from 1932 to 1963.

And so began Gurowitz’s long career at Johnson & Johnson. She held a number of positions—from Corporate Television Producer to Manager of Corporate Communications—before landing the title she holds today: Chief Historian, a role she's had since 2013.

For Women's History Month, we caught up with the keeper of the Johnson & Johnson story and self-proclaimed “massive history nerd” at her office in the Powerhouse, the oldest building at the company’s world headquarters in New Brunswick, New Jersey, which once housed the electric generators that powered all of its manufacturing.

It’s my responsibility to …

"It’s not common for a company to have a historian, but Johnson & Johnson recognized the power of our over 130-year history of innovation, support for women and commitment to corporate social responsibility and community service, not to mention our legacy of advancing human health. My role as Chief Historian is part of corporate communications, and it’s a great way to talk about yourself as an organization and to anchor what we’re doing in the present and the future.

When social media began to come into prominence in 2006, I volunteered to start a blog. We called it Kilmer House, after the company’s first Scientific Director, Frederick Barnett Kilmer, who started an archive of everything he could preserve that pertained to Johnson & Johnson after he joined the company in 1889. Some of those amazing items include the first gauze produced by the cotton mill the company opened in 1901, letters and photographs from Johnson & Johnson employees who served during World War I, and Kilmer’s own analytical balance that he used in the lab.

At first, I worried that no one but my mom would read it. Then something surprising happened: Employees became very engaged and began to stop me in the company cafeteria to talk about the latest post.

Today I also oversee Our Story, Johnson & Johnson’s online museum, which launched in 2017, and Our Story at the Powerhouse, an interactive museum here at headquarters, where we're currently featuring very rare artifacts, such as product prototypes and a letter from company co-founder Robert Wood Johnson.

People think women in STEM is a recent phenomenon, but we’ve had female staffers from the beginning. Our first female scientist, a chemist named Edith von Kuster, was hired in 1908.

Often, I'm conducting research in the company archives. I do a lot of writing, too, because I am responsible for refreshing the content of our interactive multimedia exhibits in the Powerhouse and online. 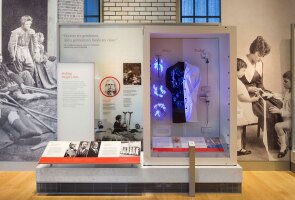 I also give tours for employees and people outside the company, including school groups. I always tell the story of how the company was founded to make surgery sterile and survivable for patients, because it expresses so many things that continue to guide Johnson & Johnson today: innovation, a commitment to patients and the medical profession, and a focus on the future. I also talk about the early pioneering women at Johnson & Johnson who led manufacturing departments more than a century ago, and about the company’s multi-language advertising in the U.S. in the 1910s.

Many times I learn something new from employees, retirees or visitors who had parents, grandparents or great-grandparents who worked at Johnson & Johnson. For instance, I heard the story of an employee who started working here during the Great Depression and was able to get dental care he needed on his first day on the job, thanks to the company's legacy of care for employees.

Tracing the history of women in STEM2D fields at Johnson & Johnson is one. People think women in STEM is a recent phenomenon, but we’ve had female staffers from the beginning—eight of the initial 14 employees when the company was founded in 1886 were women. Our first female scientist, a chemist named Edith von Kuster, was hired in 1908.

I also want to continue to grow our oral history program, which is made up of one-on-one audio interviews with employees, retirees and others who have stories to tell about the company. The oral histories become part of the corporate archives, so that we have these stories for future generations. 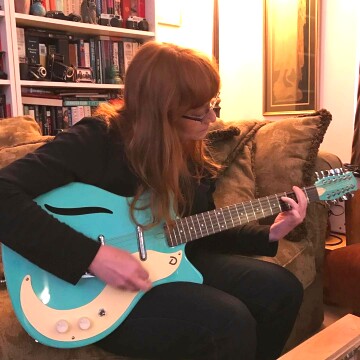 Through this program and my work overall, I’ve come to understand how connected the past and present are at Johnson & Johnson, how our heritage informs what we do today and how consistent the company’s values have always been. If employees of 100 years ago were to visit now, they would be amazed at the technology and growth, but our values are still the very same now as when we were founded.

It’s probably no surprise that I love to visit historical sites of all kinds with my family, like Independence Hall in Philadelphia. I especially love medieval history, and Kenilworth Castle and the city of York in the United Kingdom are two of my favorite places.

Guitar is another passion; I play just about every day. (Alternative music is my preferred genre.) Drawing is my other hobby—I really like illustration—and playing with my cats, Oliver and Yuki. I have two of the cutest cats on the planet!"